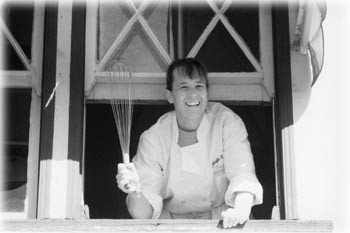 Beat the Eggs and Whip the Cream: Harvest Fair Showcase chef Donna Wegener cooks up a storm of a first course.

AS DONNA WEGENER steps smiling from her compact kitchen–crammed into the back fraction of an otherwise untenanted restaurant–she is illuminated by a soft, gleaming shaft of morning sun angling its way in through a wide side window. Adorned in a spotless white apron and shirt, Wegener literally glows in the otherwise dimly illuminated room, suggesting nothing so much as a mischievous, ponytailed seraph sent earthward to distribute culinary blessings on her bustling catering operation.

Though Wegener–the distinctly shy and self-effacing force behind Pacific Connection catering–would surely blush at such angelic comparisons, she can’t deny that she’s taken on a distinct glow, both personal and professional, since being invited to participate in the Sonoma County Harvest Fair’s Great Chefs of Sonoma Showcase Dinner, to be held Oct. 4.

Details about this year’s Harvest Fair.

“I’m pretty happy about it,” she understatedly murmurs, “though I really hadn’t expected to get quite so much attention for being selected.” Along with chefs Maria Delmonte of Santa Rosa’s Caffe Portofino, Jeffrey Reilly of the Bodega Bay Lodge Resort, and Volodia Crettol of Sebastopol’s 101 Main Bistro and Wine Bar, Wegener will be whipping up an array of her most flavorful creations for the salivating mouths at the popular annual event.

Designed to highlight the harvest season’s best wines (each of the showcase’s four courses will be paired with a Harvest Fair gold medal­winning libation), the event also serves as an eye-opener to some of the County’s most inventive–if not always best-known–cooks, caterers, and pâtissiers.

From a field of many other local chefs who sketched out and detailed proposed dishes to vie for the honor of preparing this dinner, Wegener was selected to create the dinner’s first course. Among her specialties, her frequently requested Sonoma County gazpacho–so named for its exclusively local ingredients–leads off, followed by a grilled and roasted vegetable terrine and her whimsically named Field of Greens raviolis, likewise dependent on fresh, locally grown produce. In keeping with Wegener’s freshness-is-everything philosophy, she will be doing all the cooking on the spot, with minimal prep beforehand, to ensure that all the ingredients are up-to-the-minute crisp and crunchy.

“This is fun,” Wegener confesses of the celebratory mood surrounding the showcase, “though I usually stay out of cooking shows and competitions. It’s not really what I love.” And what is it that she loves? “I’d really rather be in the kitchen cooking than talking to people about cooking,” she confesses. Immediately she reddens, bursting into laughter. “No offense intended, of course,” she grins.

Trained at New York’s prestigious Culinary Institute of America, Wegener–a Bay Area native who began working in restaurants immediately after high school–opened Pacific Connections in 1989 with her husband, Rob Grombach, whom she met when they both worked at San Francisco Emile’s restaurant.

“I worked the kitchen, he worked the front of the house,” she explains. A match made in heaven, it turns out: He can handle all the pesky business and scheduling matters while Wegener focuses her attention on what she does best. Though they were aware that they would like to start up some form of food business, the notion of a catering operation was not first on their list. During a year-long romp across Europe, the newlyweds explored all the options. On returning to the states, Wegener accepted a job in Geyserville, fulfilling her dream of living in the heart of the wine country. Shortly thereafter, the duo launched Pacific Connection.

“We had three events the first year,” Wegener admits, “Which was fine, because we were still figuring out how we wanted to do things.” Through word of mouth and a steady growth of major corporate clientele, the business has become a major success. So successful, in fact, that Wegener cannot recall how she and Grombach celebrated their 10th wedding anniversary last June.

“I think we were working,” she grimaces happily. “June is a busy month.” That’s not a complaint. Asked why she does what she does, Wegener doesn’t hesitate.

“I like the hard work,” she insists. “I enjoy knowing that from May to October, I don’t have too many days off. It’s like being an athlete, running a race. I really can’t get enough.”