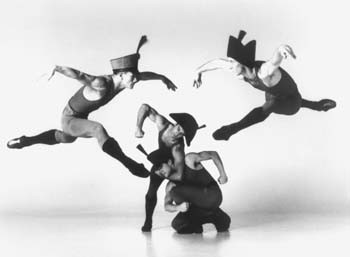 The Paul Taylor Dance Company leaps back into the light

YES, NEW YORK choreographer Paul Taylor has been at it for 44 years. No, that doesn’t mean that this 66-year-old award-winning artist has gotten stodgy or off his toes in any way. In fact, the older this former Martha Graham protégé grows, the more adventurous his work becomes.

A program completely different from what was previously offered, this evening of challenging dance begins with “Airs,” set to various works of Handel’s. First performed in 1978, this older piece begins the evening on a classical note, as a goddess blesses three couples in the fancy-turns-to-love springtime. Lyrical and conceived as a reflection seen through the glowing haze of reminiscence, “Airs” is about as traditional as Taylor ever gets.

After intermission, the dancers return to debut “Prime Numbers,” commissioned for the celebration of India’s 50th anniversary of independence earlier this year. Following Webster’s definition that “a prime number is one that has no divisors other than itself and one,” “Prime Numbers” features dancers singly and together in undivisible groupings set to original music by composer David Israel. The touring production does not include an onstage cello, as it does when the company plays their hometown of Manhattan. A brave bower, the cellist is required to sit smack-dab amid the dancers, thus breaking up the primes with her presence.

Borrowing near-Eastern themes, “Prime Numbers” is what Taylor has described as a “melting-pot” piece, an amalgamation of styles and ethnic rhythms borrowed boldly from here and there as he pleases, none of them adhering to any tradition save that which Taylor himself creates.

The final work of the evening is the colorfully scored and costumed “Funny Papers,” dedicated to those who read the comics before the news or the horoscope. Conceived in a collaborative workshop by six of the company’s members, “Funny Papers” is set to such tunes as “Alley-Oop,” “I’m Popeye the Sailor Man” (the dancers bathe in spinach-green light when Popeye’s leafy strength takes hold), “I Like Bananas Because They Have No Bones,” and the aforementioned “Bikini.” This final piece takes broadly from such traditions as the Charleston, conga, polka, and the muscularity of acrobatics.

In his essay, “Paul Taylor: Counter-Revolutionary,” writer Terry Teachout notes that “Taylor’s singular achievement has been to siphon the angst out of modern dance without simultaneously removing the seriousness. Even when his subject matter is dark and shocking, his tone remains light and effortless.”

Taylor, once asked if his work was for the ages, replied this way: “I try to make them last,” he said of his dances. “They’re not made to be seen one time.”