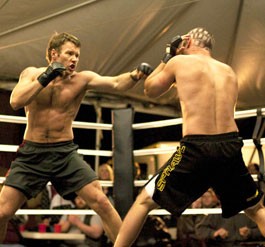 'Warrior': yes, it's another fighting movie

Director Gavin O’Connor (Miracle) must consider this his two-and-a-half-hour testament of faith. Big books with big titles (“STEINBECK”) float onscreen behind Nolte. His estranged offspring Brendan (Joel Edgerton) is a Pittsburgh physics teacher by day, parking lot prizefighter by night. Like many these days, he is going glub-glub-glub, but when a smarmsville banker suggests bankruptcy, he tightly says that’s not how it’s done in his world. Instead, he’ll enter a $5 million mixed martial arts competition called “Sparta.” His rival: the “legendary Russian fighter Koba” (Stalin’s code name!).

Meanwhile, his long lost brother Terry Malloy, whom he should have looked out for, emerges . . .

Just kidding. That’s actually Tom Hardy as Nolte’s other son, Tommy, with a carved Brando eyebrow from On the Waterfront. Too bitter to talk to Old Nolte, he’s bitter enough to train with him. Tommy’s an Iraq vet, and he won’t talk about that, either. Meanwhile, “the Russian Bear,” proudly wearing the hammer and sickle on his shorts, is waiting for his chance to grapple.

There’s a lot offstage that has to be described, and the “wars” are a visually illegible series of two-man clusterfights. As Brendan’s principal says, “Literally it looks bad, figuratively it looks worse”—Warrior‘s astronomical Riefenstahl-ism needs a serious lancing, with its fireworks, helicopter shots, 300 singing marines in khaki and the “Ode to Joy.” The supposed emulation of ’70s movie making (less Rocky than Rocky IV) misses the iconoclasm and intimacy of the real deal.