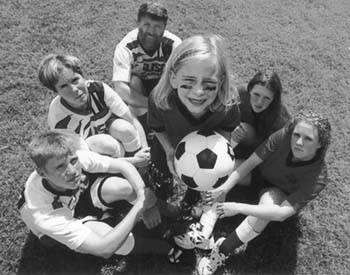 Getting their kicks: The Raymonds–George and Susie, daughters Desaree (center), Angie, Nadine, and son George Jr.–share a passion for indoor soccer.

For worshipers at the Church of the Spotted Ball, indoor soccer is heaven

ON A CRUMMY SUNDAY in the wet spring evoked by the warm ocean current named for a young boy, small rivers form on the asphalt outside an off-white warehouse forgotten in an industrial suburban backwater of Santa Rosa. There’s only one reason to be here: soccer. Indoor soccer, that is. Through a single steel door the dread of El Niño blossoms into an uplifting onslaught of yapping teenagers, conversing parents, the smell of sweat, the screech of the referee’s whistle, the sonic shrapnel of video games, a stampede of running feet, and the hair-raising bang of soccer balls against the wall.

This is Sports City Indoor Soccer Center in Santa Rosa. Indeed, it’s not only the center of the Sonoma County soccer scene, consuming the passions of entire families, and mixing the often separate Anglo- and Hispanic-soccer cultures, but also a soccer savior. Sports City has been about the only place to play soccer in the deluge of winter, when most outdoor fields are closed to public use for months on end.

Beneath the massive steel girders that span the cavernous building shimmers an electric green AstroTurf arena enclosed by netting and Plexiglas walls and garnished with diverse international soccer flags. On this 75-yard patch of plastic the gladiators of indoor soccer–girls and boys, women and men, from under six to over 40–battle for victory.

Indoor soccer is more akin to hockey and basketball than to outdoor soccer. Passing off the wall creates an extra dimension. Hard fouls get you two minutes in the penalty box. It’s a six-on-six game played in the frenzy of a permanent fast break and constant oxygen debt that rips the lungs from the chest of even the fittest player in just a few minutes.

“It’s a lot of work indoors, but it’s so much fun. I love it,” exults George Raymond of Sebastopol United, whose wife, Susie, daughters Angie and Nadine, and son George Jr. all play at Sports City.

“It gets you to exercise on a regular basis and is fun instead of just the boring gym,” says Susie, who plays with George along with Angie on a co-ed team.

“I think it’s brought us closer together,” says Angie, “because everyone in my family is very busy and it kind of makes time for us to do something together.”

This popular indoor soccer complex opened in 1996 to a notable buzz of excitement among the dozens of adult outdoor soccer teams. In the depths of El Niño this year, Sports City operated at full capacity, hosting 250 teams and 3,000 players per week. The center employs 32 people, including 24 referees.

“I want this to be a total hub for soccer,” says Sports City owner Andrew Rowley, a former professional indoor-soccer coach. With blond hair, intense unwavering eyes, and smoothly muscled legs, Rowley looks like one those guys with posters of Franz Beckenbauer rather than of Joe Montana on his bedroom wall. It’s easy to muse that he must read, instead of Sports illustrated, obscure magazines about professional European soccer leagues.

Rowley grew up familiar with his uncle’s British pub, the Mayflower in San Rafael, where he experienced soccer culture in the European tradition. After the recreational weekend games, his father and friends retired to the pub for a few noisy pints of beer and the big game on television. “I wanted to have that atmosphere I grew up with,” says Rowley.

In his quest to make Sports City the ultimate soccer hangout, Rowley updates game scores and league standings every night. Soon he’ll offer videotaping of games, and, best of all, Sports City just landed a beer permit to help savor every World Cup game this summer on large-screen TVs.

To soccer heads, Sports City is a very juicy experience.

Fleet feet: Fast and hard–not for the meek.

IT’S ALSO a growth industry. Games go from early to late, causing some parents to protest 7:30 morning games. Not to worry. Rowley plans to open a second soccer facility, called Sports World, at the site of the old Yeager and Kirk hardware store on Santa Rosa Avenue. Set to open next January, Sports World will feature a full health club, restaurant, and sports bar that will overlook an indoor soccer field.

“And they should,” says Rowley. “It makes them realize it’s not so easy.”

Rowley has a refreshing commitment to sportsmanship and fun. “Too much pressure is what I see as a major problem in outdoor soccer,” he says. “Yelling and pressure: that stuff really takes away from the game. A lot of kids like indoor better than outdoor soccer, where sometimes the atmosphere is too competitive with too much pressure from coaches and not the right training. They come indoors and get less pressure and have more fun, which is what the game is all about.”

“I’m there for the good time,” say indoor-soccer enthusiast George Raymond. “And I get that along with a great cardio workout and tons of camaraderie.”

AS A BONUS, the short, tight passes and quick moves required by indoor soccer help players improve their passing performance outdoors. David Henry, a defensive player with Sebastopol United, coaches his son Michael’s team. “I notice that my guys improved a lot in the short passing game,” observes Henry.

“They like it a lot. It’s a very fast game. There’s no out of bounds, very little stoppage of play. The guys enjoy themselves out there.”

The supportive role of indoor soccer for outdoor soccer is epitomized by the Brazilians, the reigning world champions, who often play in confined spaces with fast surfaces like basketball courts or beaches. And this Church of the Spotted Ball gives proper respect to the apostles of Brazilian soccer with a 6-by-20-foot vinyl poster depicting the almighty Bebeto, one of Brazil’s finest.

“It really fine-tunes your skills because it’s at such a fast pace that you must keep very good control of the ball in tight spaces,” says Ian Mork, assistant men’s soccer coach at Sonoma State University and a former professional indoor player. “You have to think very quickly.”

Mork, however, warns that success indoors based on speed and power may not always translate outdoors if a player can’t “read” the more complex, full-size, outdoor scenarios.

One thing for sure, indoor soccer absolutely demands the best possible physical condition. “Indoors is tough,” says Raymond. “Indoors you have a tendency to run a lot more. You are on offense and defense constantly. Outdoors when the ball is in the upper left-hand side of the field and you’re the right fullback, there’s time to suck down some air. Indoors that’s not necessarily the case. The passing is so crisp, so quick, the transition is immediate.

“If you don’t get back on defense, your goalie is meat. It’s that quick.”