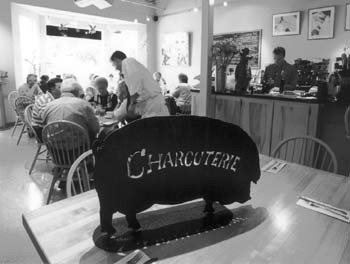 Porcine palace: Oddly, the pig motif at Charcuterie is just about the only pork you’ll find at this popular Healdsburg eaterie, with the exception of the house-cured pork tenderloin.

OF COURSE, you don’t have to love pigs to enjoy dining at Healdsburg’s Charcuterie restaurant, but it sure would help. The place is a veritable porcine shrine–the corpulent critters are everywhere. There are flying wooden pigs dangling from the ceiling; plump stone pigs keeping guard near the entrance; delicate clay pigs waltzing on their hind legs; and big, solid wrought-iron pigs weighing down the counter.

All this piggy paraphernalia certainly does justice to the restaurant’s moniker. The French word charcuterie can signify either a pork butchery or the delicatessen trade.

Indeed, it is also the word for a French deli.

One recent Sunday at dusk, the popular restaurant lured us in off the Plaza, with a window full of glittering tea lights and a chalk board promising an interesting selection of wines and daily specials.

Inside, the eatery is small and intimate and has the feel of a casual European wine bar. The walls and ceiling are painted a pale shade of pink, like pigskin. The place was busy, so we opted to eat at the cozy counter that seated just two. The counter was decorated with fresh flowers and a basketful of baguettes. It provides a good viewing spot from which to watch the young rosy-cheeked, white-tunic-ed chef clattering sizzling skillets over leaping flames in the tiny kitchen to the left, and spy on the other diners to the right.

The service was a little harried. And while some staff were very friendly and accommodating, our server was impatient and even a bit testy as we leisurely (perhaps too leisurely) perused the menu.

Dinner got off to a great start with the crimini and portobello mushroom fricassee ($7.25). This rich, earthy appetizer featured finely chopped mushrooms heated and ladled into an aromatic heap and was surrounded by crostini (crunchy toasted sourdough baguette rounds). The fricassee also contained generous hunks of garlic, scallions, and bright green ribbons of shredded fresh basil, thyme, and parsley, which made the dish even more satisfying.

Next, we sampled a pair of soups (the day’s specials), which are included in the price of the entrées. The chilled carrot soup with ginger was too thick, reminding us of a veggie smoothie, and, in addition, had an unpleasant metallic aftertaste. The potato leek soup was better, but the seasonings were skimpy and the broth had an overly glutinous consistency.

The Sebastopol salad was a hodgepodge of toasted walnuts, red delicious apples, golden raisins, and crumbles of tangy Gorgonzola cheese over mixed baby greens with a poppy seed dressing ($10.50.) It was pleasant enough, but there seemed to be no real thought behind the combination of tastes. There was just too much going on here.

With a name like Charcuterie we had expected to find all manner of pork items gracing the menu. There’s only one: a house-cured pork tenderloin served with brown sugar and brandy sauce ($15). Several delicate, tender slices of pork lay fanlike across the plate. The dish was accompanied by flavorful, perfectly roasted Yukon Gold potatoes and a handful of crunchy sugar snap peas, which were the essence of freshness. Our one gripe was that the rich brandy sauce topping the pork was overly sweet.

As we cut into our tenderloin, we noticed on the opposite wall several black-and-white close-up photos of piglets reclining in their pen.

WE ATE OUR PORK with downcast eyes and pangs of guilt under an exhibition of snouts and trotters and a farrow of sleeping piggies, with their closed eyes, curly tails, and curvy smiles …

The baked herb-crusted Pacific king salmon with fresh corn chutney, also served with roast potatoes and sugar snap peas ($18.50), had the potential to be moist and buttery, but it arrived undercooked. The whole-kernel corn chutney had a sharp flavor that jarred with the salmon.

We were somewhat solaced by the restaurant’s good spectrum of wines in a variety of price ranges, including end-of-bin offerings, and featuring current releases of local wines and selected wines from other regions. The Rochioli Russian River Valley 1996 Pinot Noir ($35) was pricey but well worth it for this superior wine. It’s a classic pinot–redolent of soft ripe strawberries.

For dessert, we tried the orange rosemary crème caramel ($5), an herbal concoction that was not at all sweet and tasted more like an appetite-enhancing starter than a dessert. Weird.

The lemon pot au crème ($5), however, was delicious: an intense lemon dessert topped with a cloud of whipped cream, served in a deep white bowl, and accompanied by a huge strawberry and a jaunty Russian cigarette-type cookie. Simultaneously refreshing and decadent.

All in all, several of the dishes we sampled could be less heavy-handed, but the atmosphere is upbeat enough to please all but the most staunch oinkophobes.