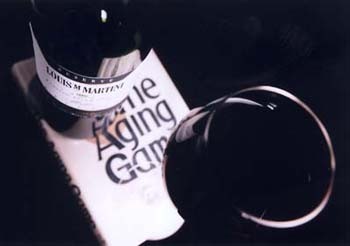 Well red: Strategic aging can be a hit-or-miss proposition, though some vintage merlots are highly rated.

On the fine art of aging gracefully

THE ADJECTIVE most commonly associated with merlot, especially among alliteration addicts, is mellow. Most merlots on the market today are ready to drink, so the idea of laying down a bottle on one’s wine rack for additional “mellowing” seldom is given a first thought, let alone a second.

We know that a majority of cabernet sauvignons benefit from a year or two (and sometimes more) of rack or cellar time, but is the same true of merlot? A recent vertical tasting of a dozen Louis M. Martini Winery merlots from the inaugural 1968/70 bottling to the just-released 25th-anniversary 1995 edition provided some clues.

While Martini is a Napa Valley winery, it almost always has secured the grapes for its merlot program from Sonoma County vineyards. It was true of the 1968/70 release, a blend of two vintages from the Healdsburg Vineyard, and it’s true of the 25th-anniversary bottling, which carries a Russian River Valley designation. Of the four vineyards owned by the Martini family today, two are in Sonoma County: Monte Rosso, which hugs Highway 12 just north of Sonoma, and Los Vinedos del Rio, situated just south of Healdsburg in the Russian River Valley. The latter is the source of Martini’s premium merlot grapes.

The 1968/70 bottling generally is acknowledged as the first varietal merlot made and marketed in America. Louis Martini planted merlot to blend with his cabernet sauvignon, and because there was such a small crop in 1968–not nearly enough for the winery’s cabernet program–he aged it in neutral cooperage and then blended it with merlot from the 1970 vintage.

THAT ANY FRUIT FLAVORS remain in the ’68/’70–a wine that is old and tired but still kicking–speaks volumes about merlot’s aging potential. It certainly has seen better days, yet it remains drinkable, flavorful, and, yes, enjoyable. But when it comes to other “mature” merlots, keep in mind the definition of potential; we’re talking about what could be, not necessarily what will be.

Martini’s 1973 California Mountain bottling, for instance, was extremely light and somewhat raisiny in the nose despite being three years younger than the ’68/’70. And the 1979 California merlot was overly herbal and warm on the back end even though it possessed an alluring mulberry aroma.

“The wines which age the best are balanced wines,” says Michael Martini, who has been Martini’s winemaker since 1977. “That means not too much oak and not too much winemaker intervention, which allows the fruit flavors to evolve. When you can still taste fruit in an older merlot, that’s a balanced wine.”

All wines sampled from the 1987 vintage onward were drinking well … some very well … but the two most recent releases, the 1994 and ’95, were the most complex, delicious, and satisfying wines by far.

Conclusion: While merlot may evolve over time and remain both drinkable and enjoyable, strategic aging appears to be a hit-and-miss proposition. And since most merlots taste wonderful when they hit store shelves, why risk having them endure the ravages of time?