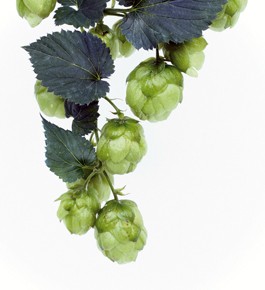 They come in complex blends, aromatic potpourris redolent of grapefruit, guava, pine sap and cat pee—and beer just wouldn’t be the same without them. But when it comes to hops, even dedicated drinkers are unlikely to know the names of most individual varieties, of which there are dozens commonly used in beer, and fewer still understand the precise qualities that differentiate one hop from another.

But much the way that varietal wines emerged from the Bordeaux-, Burgundy-, Rhone and Chianti-style blends of traditional winemaking, many brewers are experimenting with beers that feature just one hop variety, rather than the usual blend of three or four, and this relatively new trend bodes to put the names and virtues of varietal hops squarely on the map.

Often on tap at Healdsburg’s Bear Republic Brewing Company is an ale called Rebellion, which sports the Chinook hop, identifiable by its striking pine-needle essence. The most recent incarnation of Rebellion, though, is just the latest version of the exact same beer, a strong pale ale first brewed in 2006, that the brewpub periodically reproduces using the same yeast and malt recipe but flavored at each go-around with a different hop. Rebellion has previously been flavored with Simcoe, Cascade, Centennial, Columbus and Amarillo hops, the latter well-liked for its powerful grapefruit nose.

“These beers provide people with a solid understanding of exactly what each hop does to a beer,” he says. “Eventually, it makes you a better beer drinker.”

Other brewers feel that hops are best blended. Larry Sidor of Deschutes Brewery in Bend, Ore., for one, says that single-hop beers “rarely cut it as beers you want to package.” Still, he brews several small batches each year for brewpub patrons.

But Bear Republic’s brewer Peter Kruger notes that the purpose of blending is to round off edges and camouflage idiosyncrasies, and to him the idea almost verges on boring.

“The nature of blending is to homogenize something and create a well-rounded product, but when you use a single grape or hop, you get more personality and angular flavor.”

Other hops have their own particular virtues, though Sierra Nevada’s brewer Steve Dresler says that a fine line separates potent perfection from olfactory overkill. For example, the Simcoe emits a fine smell of grapefruit. A pinch too much, though, and you get cat urine. The East Kent Golding, a British variety, smells like cedar on the better end and fishiness on the other. Czech Saaz is a strong, spicy hop, but if used out of balance it smells like vinegar.

The Columbus hop smells remarkably like marijuana, a point not lost on the production team at Avery Brewing Company in Boulder, Colo., whose Hog Heaven barley wine is brewed with a heavy dosage of 100 percent Columbus and, according to brewmaster Adam Avery, “reeks of ganja.” The company’s production manager, Steve Breezley, notes that it “smells like a dime-bag”—exactly the effect the brewers were seeking.

But brewing a staple beer with just one hop can backfire if a price spike or a poor harvest renders the hop abruptly unavailable. Marin Brewing Company’s Arne Johnson, for one, used to make his Tiburon Blonde with Czech Saaz hops. Then came the much-lamented shortage of 2007, and the hop’s price escalated by several hundred percent. He was forced to rewrite the recipe and now blends Czech Saaz with the more readily available Sterling hop for the same, though slightly different, beer.

The same global hop shortage rewrote the recipe for Stumptown’s Rat Bastard Pale Ale, which Hackett has since blended with Summit hops, though he intends to resume the one-hop original recipe as prices stabilize. The 2007 hop crisis similarly put an end to Drake’s Brewing Company’s annual single-hop beer festival, held at the San Leandro brewpub from 2005 to 2007. Each participating brewery made a basic pale ale flavored with the same hop. Warrior was the starring variety in 2005, Summit in 2006 and Bravo in 2007.

Lagunitas Brewing Company has also had to adjust to shortfalls in rare hop production. Lagunitas once bittered many of its beers with the Eroica hop. Then the Washington farmers who grew the variety announced plans to replace it with other more popular types. That season, Lagunitas promptly bought up every last bale of Eroica and brewed a single-hop pale ale as a tribute beer eulogizing the flower. Ron Lindenbusch, who co-manages the Petaluma brewery, still keeps several bottles of Eroica Ale in his office, capsules containing the last existing traces of the Eroica hop essence.

“With Eroica, we put that hop to the grave,” he recalls.

Or did they really? According to John Henning, genetic researcher and hop specialist with the USDA, five Eroica plants still exist deep within the rows of tangled vines in the USDA’s Corvallis, Ore., hop collection. There, 400 permanent varieties grow, while on satellite nurseries nearby, as many as 10,000 experimental breeds are ever fluxing in and out of existence as breeders dabble with new hybrids and crosses, ever seeking to isolate desirable traits and create potentially profitable hop breeds.

Those varieties get tossed, but Henning says there is at least one hop on the farm—so newly created that it has no name—which smells strongly of chocolate. It’s likely to be a keeper.

Not all breweries care about aroma, and one of the leading forces in the commercial extinction of many hop breeds is the escalating demand for alpha acid extract, a sticky saplike reduction made from any of several extremely bitter hops. Extract is favored by the big brewers as a cheap means of bittering beer, while many craft brewers disdain hop extract as an insult to the artistry of making beer. Yet the overpowering demand for the refined syrup has driven farmers to gradually exchange aromatic character for sheer bitterness.

In 1980, the bitterest hop of all was the Cluster hop, which contained between 6 and 9 percent alpha acid content. Today, other varieties have been edged by breeders well into the double digits, with some “superhigh alpha” types, like Apollo, Bravo, Tomahawk, Zeus and Millennium, running 16 to 20 percent. By comparison, Czech Saaz contains just 2 percent alpha acid, and in an industry where alpha acids equal profits, few farmers still grow such mild aromatic varieties.

Craft brewers’ demand for rare breeds, however, could keep many varieties from slipping over the brink, and the single-hop beer trend could fuel that demand. At Russian River Brewing Company, brewer Vinnie Cilurzo regularly remakes Hop 2 It Ale with the same malt makeup but a new hop each time. The beer most recently appeared on draft featuring Sterling hops, sometimes described as a “spicy” variety. Marin Brewing Company’s Dirty Blonde pale ale also features pure Sterling. And from Denmark, Mikkeller is rolling out a series of IPAs, each highlighting a hop of its own. The Mikkeller Cascade IPA smells and tastes mildly citric and vegetal. By comparison, the Nelson Sauvin IPA is much fruitier, with a brilliant taste of ruby red grapefruit over a heavy, dull bitterness. These beers and others in this unique IPA series are periodically available at Santa Rosa’s Bottle Barn.

The Chinook Rebellion should be flowing again soon at Bear Republic, where brewer Kruger believes hop varieties may someday become as well-known as varietal wines. Stumptown Brewery’s Hackett also believes that consumer interest in varietal hops will lend extra “credibility” to the art and industry of brewing. Whether names like Zlatan, Fuggle or Hallertau Mittelfrueh will ever flow from the tongue as freely as do our most popular varietal grapes remains to be seen, but in the North Bay’s brewpubs, beer drinkers are already talking.

If we learned how to say “Gewürztraminer,” perhaps anything is possible.