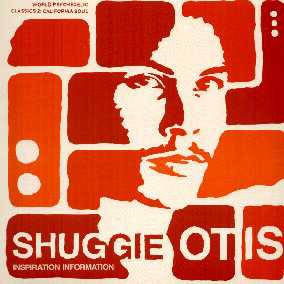 I love all waste And solitary places; where we taste The pleasure of believing what we see Is boundless, as we wish our souls to be.

BOUNDLESS potential–that’s how people often described Shuggie Otis in the early ’70s. And what a talent he possessed–albeit largely unrealized. Now residing in Windsor–Windsor!?–Shuggie is enjoying renewed interest of late, thanks to Inspiration Information, a lost psychedelic-soul classic reissued last month on David Byrne’s trendy Luaka Bop label. In recent weeks, Shuggie, 48, has received glowing reviews (Rolling Stone said that the album “reveals an expansive creativity that appeared unlimited–maybe even a Prince-size talent in the making”), appeared on the David Letterman Show and the Conan O’Brien Show, and popped back up on the charts.

The CD, actually a compilation of tracks from his 1971 solo album First Flight and the 1975 cult classic Inspiration Information, features the retro-cool ditty “Strawberry Letter 23,” a No. 1 R&B hit for the Brothers Johnson in 1977 and included by filmmaker Quentin Tarantino on 1997’s Jackie Brown soundtrack.

While “Strawberry Letter 23,” written at age 17, has proved a lucky charm for Shuggie–the Brothers Johnson’s version alone sold a million copies–Inspiration Information (on which Shuggie plays all the instruments) was ignored upon its release in 1975 and actually helped bring his meteoric career crashing to an abrupt halt.

All of which left a lot of fans pondering, what the hell happened to Shuggie Otis?

Johnny “Shuggie” Otis Jr.–the oldest son of the R&B pioneer and the prototypical blues prodigy–made his recording debut in 1962 at the tender age of 12, playing guitar behind former Raylette singer Ethel Fort. In 1967, he recorded his first sessions with Johnny Otis and His Orchestra, playing a simmering blues guitar on his father’s 1968 comeback album Cold Shot (Cadet). In 1969, Shuggie recorded three tracks for Frank Zappa’s Hot Rats (Barking Pumpkin) album, one of which–“Peaches en Regalia”–was used on the album.

He hit his stride with 1974’s ambitious Inspiration Information, which features Sly Stone-style ’70s-funk arrangements that hold up surprisingly well nearly 30 years later. Unfortunately, Otis spent so long recording the album that the record label dropped his contract. Ironically, keyboardist and ace session player Billy Preston phoned Otis around that time to say that the Rolling Stones wanted him to join the band and fill the lead guitar spot vacated by Mick Taylor. Shuggie declined.

“I had my own group. My own label deal,” he once said of the missed opportunity. “I just wanted to do what I want to do. I had my own identity.”

Plagued by lingering health problems, Shuggie instead faded from the spotlight, emerging only for an occasional session gig and with a comeback always looming on the horizon.

Some music critics aren’t buying it.

“No matter how much the partisans claim–and their effusive praise is plastered all over the liner notes, with Sean O’Hagan claiming that it shocks you out of a rut, Stereolab’s Tim Gane saying it is ‘almost like a new style of music that could’ve developed but never did’–this isn’t revolutionary, even if it’s delightfully idiosyncratic. So, don’t fall for the hyperbole,” warns Stephen Thomas Erlewine in the All Music Guide. “This isn’t an album that knocks your head off–it’s subtle, intricate music that’s equal parts head music and elegant funk, a record that slowly works its way under your skin.

“Part of the reason it sounds so intriguing in 2001 is that there just aren’t that many musicians that doggedly pursue their individual vision while retaining a sense of focus. But it isn’t a record without precedent, nor is it startling. It’s a record for people that have heard a lot of music, maybe too much, and are looking for a new musical romance.”

In the June 1 issue of The New Yorker, music critic Ben Greenman also scoffs at Byrne’s comparisons of Shuggie’s R&B to Marvin Gaye’s “Inner City Blues” or Sly Stone’s landmark “There’s a Riot Going On,” noting that the label–and Shuggie, if he’s up to the challenge–appears positioned to cash in on the rising popularity of such neo-soul stylists as Macy Gray, D’Angelo, and Erykah Badu. “Otis was not exactly sunny–he had a fragility that bordered on melancholy–but he was insular and hermetic and emphatically apolitical; his music has timeless appeal because it never belonged to his time to begin with,” notes Greenman. “He was also, upon closer inspection, not much of a songwriter. The instrumentals on Inspiration Information–five of them, one of which is nearly 13 minutes long–seem like pages from the sketchbook of a brilliant yet unfocused art student. . . .

“Like Jill Scott, Musiq Soulchild, or any number of other new neo-soul artists, he seems not only fresh but unripe.”

One wonders, will we hear anything new from Shuggie, and if so, has that boundless potential finally flourished?

It’s not getting anywhere near as much attention as Inspiration Information, but this newly released double CD, combining the hard-bitten funk of Black Heat’s rare 1972 eponymous album and 1974’s No Time to Burn, is well worth the search. Sometimes reminiscent of War and Sly Stone, Black Heat is the essence of funk, the spiritual ancestor to Washington D.C.’s short-lived go-go music scene and such black hippies as De La Soul.