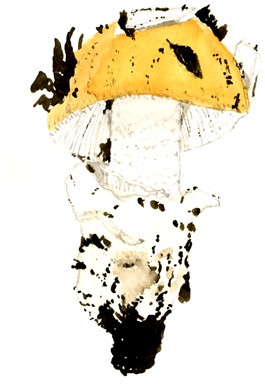 In February, my partner Barbara became a freeway flyer. No special license for freeway flying is required. All you need is eight years of college, teaching experience, wheels and, of course, another source of income. I decided to co-pilot the 90-minute trip from our home in Davis to Rohnert Park when she became a part-time instructor at Sonoma State University. (Public transportation by bike, train and two busses takes 4.5 hours.)

Knowing that Sonoma County is a productive mushroom habitat, I brought my sketchpad and watercolors with me on these journeys. Field manuals remained in the trunk until needed for identification. The rule in sketching mushrooms is to draw first when the specimen is fresh and ID afterward. I collected and painted fungi while Barbara taught her class. When needed, I supervised makeup exams in the library.

I am no stranger to campus foraging. I have identified several dozen species on the UC Davis campus where I taught for 40 years, and pass time at dull meetings drawing mushrooms. By now, UC Davis mushrooms are familiar. I looked forward to checking out the SSU campus as a new habitat. This would also be an opportunity to observe growth stages. Returning to the campus at one-week intervals, I could follow individual mushrooms from the button stage to maturity and finally to desiccation.

Not knowing what I would find, I collected a few representatives of anything that I could sketch, including buggy, blackened and over-the-hill specimens, LBMs (little brown mushrooms) and deflated puffballs. The coffeehouse in the Schulz Library proved a good location to paint what I collected. There are tables with natural light and refreshments available. Everyone is cool. The old guy could do his painting without an audience. No one approached or watched what I was doing. By mid-March, I was a Friday-afternoon fixture; the service staff knew I wanted a small latté.

Collecting mushrooms so near to where I could paint them was a new experience for me. Most places, I have to wait hours until I return home to begin painting, and by then the specimens will have deteriorated.

The SSU campus is beautifully landscaped with widely spaced buildings, well-tended flower beds and gardens, and many trees, both domestic and exotic species. The groundskeepers seem to have an unlimited supply of wood chips. There are several small artificial lakes and plenty of benches on which to sit and contemplate. The ambiance reminded me of Davis when I started teaching in 1963. There were only 4,500 students at the time, plenty of space between buildings and no traffic lights in town.

Foraging in a new location revealed minor variations of familiar species. Whether these were new varieties or just environmental adaptations is difficult to say without DNA analysis. Weekly visits provided the opportunity to observe patterns of succession. The previous week’s enormous fruiting of small inky caps precipitously declined on my next visit, but the tough twisted cup fungi increased, although many were dark and moldy. Watered lawns brought up tiny grass fungi. By mid-March, after the rains had stopped, almost all the mushrooms I saw were repeats. There were still hundreds of tan spring agrocybes with cracked caps in the wood chips, and dozens of handsome spring amanitas under live oak along East Redwood Avenue, but I had already painted them. Occasionally, I called something a new variety of a familiar species just to keep my search going. By April, the spring fruiting was over and my documentation ended.

There are several edible varieties on campus and even a few hallucinogenic psilocybe, although I collected only single specimens as painting models. On several occasions, the planter beds outside Darwin Hall contained prized morels, the kind that sell for megabucks in upscale markets.

I don’t mind divulging their location as I won’t be returning any time soon. With the state budget in limbo and looming cuts, part-time instructors aren’t likely to be rehired. Enrollments may be reduced and classes cut. The freeway flier landed, taught her course and now is gone.

Open Mic is now a weekly feature in the Bohemian. We welcome your contribution. To have your topical essay of 700 words considered for publication, write [ mailto:[email protected] ][email protected]