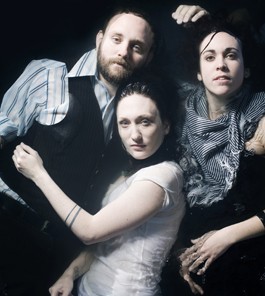 It’s official: Josh Staples is a liar and a thief.

I’m driving him—and he’s basically ‘faced—over to the other side of town after a big daylong wedding. It’s 11pm, and he’s finally had enough holy-matrimony libation to get up the nerve to do this, and I’m the only one sober enough to chauffeur him to a party in Bennett Valley. Our goal: to find Ben Henning, the subject of “Song for Ben Henning,” the final song on the New Trust’s new album, Get Vulnerable, so Staples can deliver the news in person.

In the past week, guilt has been eating at Staples like a vicious shark. Even strengthened with liquid courage, he’s still more nervous than I’ve ever seen him—pulling at his clothes, talking skittishly and switching tactics every few seconds. It’s uncharacteristic.

The sordid tale goes back to the summer of 2006, when Henning, a member of the band Polar Bears, discovered that the cheap Alvarez bass guitar which he had played for more than four years had been stolen backstage at a show. Staples, ever the devoted friend, immediately loaned his bass as a replacement until Henning could save enough to buy another. What no one could ever have guessed is that the bass was, in fact, stolen by none other than the lowly, backstabbing Staples himself.

Why in the hell would Staples, normally a kind and honest guy, do such a thing? “That bass was a piece of shit with blood all over it,” he tells me as we get off the freeway. “He’s a great bass player, and that thing is the fuckin’ clown of bass guitars. He deserves more. He deserves the bass that he got to replace it, that Fender jazz bass, it’s beautiful. But, you know, he also deserves more from his friends, who shouldn’t be stealing from him.” I happen to know that the Alvarez bass, piece of shit or not, was dear to Henning’s heart, and he’s been talking about it wistfully ever since it disappeared.

Sitting in the passenger seat, Staples looks somber before discovering a happier line of thought. “But it’s not lost! Wouldn’t you be stoked if you got something back that was gone for years and years, like, your favorite thing? It’s not gone!” But another few seconds go by, and the gloomy outlook returns. “Man,” Staples sighs, “he’s not gonna trust me ever again. This has gone from being a prank to a full-blown violation, a straight-up lie.”

At the party, there’s cheap beer galore and a room packed full of people dancing to blaring loud music. We track down Henning and manage to pull him into an unoccupied room with a stereo. Staples is putting his best campaign spin on the song: “It’s called ‘Song for Ben Henning,’ so that’ll get you liking it right off the bat, right?” Henning seems eager, but a little bit confused, as Staples futzes with the CD, stalling for time.

“OK. I’m just gonna do it. Here are the lyrics to make it easier,” Staples offers, unfolding a lyric sheet after he finally presses “play.” In a plodding, minor-key dirge, the song lyrics recount the events of that night two years ago, when Henning discovered his bass was missing, and Henning starts laughing. I look over and discern a subtle horror that creeps into Staples’ countenance as the song nears, and eventually delivers, the stunning confession: But now, finally, the truth, Staples’ voice sings from the speakers, It was I who had stole it away.

But instead of brimming with rage, Henning’s eyes widened with excitement. “That fucking rules so hard!” he exclaims, and throws a huge bear hug around Staples.

“It’s OK,” Henning says, putting hands on Staples’ shoulders for emphasis. “It’s all right, dude. It’s fucking awesome, Josh. I think I have to frame this.”

“I know you liked that bass so much. I have it, it’s outside.”

“No, you should bury it somewhere. This is awesome. Thanks, dude.”

“You know, not many people say, ‘Thank you for stealing my guitar from me.'”

“No, it’s totally worth it. I mean, ‘Song for Ben Henning’! You don’t have to be that torn up about it. It’s fucking awesome.”