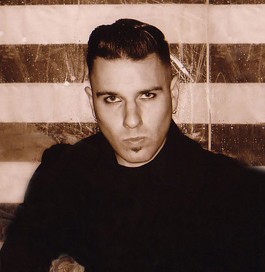 Scene of the Crime

Why are Tiger Army back at the Phoenix?

In 2002, Tiger Army were in the middle of a set at the Phoenix Theater, barreling through their trademark punkabilly. With standup bass, trap snare and hollow body guitar, the band was on fire, shredding through songs from their recent album, Tiger Army II: Power of Moonlite, and the crowd was held rapt.

Except for one guy.

The Heckler, as we’ll call him, was that annoying guy in the crowd. He shouted stupid things between songs. He may or may not have almost knocked over the bass guitarist trying to stagedive. He didn’t appear to be taken with the band. Tiger Army weren’t too taken with him, either, and the band called him out from the stage.

One thing is sure: Tiger Army injured someone, and badly, at the show. When word of this got back to Phoenix manager Tom Gaffey, he did what any self-respecting theater manager would: went livid, promising the Heckler that Tiger Army would never play at the Phoenix again.

None of this was very surprising. Anyone who knew Tiger Army frontman Nick 13 (above) when he was a pomade- and Social Distortion-obsessed teenager living in Ukiah will know that he’s long prided himself on looking out for number one. In 1993, frustrated at the amount of geeky, friendly pop-punk dominating the Bay Area in the early 1990s, he determined to bring punk back to a time, wrought by his heroes Lee Ving and Tesco Vee, when punk meant two words: “Fuck you.”

Somehow, the nicest guys in Ukiah—the band members of AFI—took a shine to Nick 13 and his cocksure attitude. They helped him form Tiger Army, and gave the band a major boost with shows and tours. Tiger Army have since opened for Danzig, sold hundreds of thousands of albums on the nation’s premier independent label and toured worldwide, amassing legions of psychobilly fans under the rallying motto “Tiger Army Never Die.”

Tiger Army is playing the Phoenix again this weekend, which comes as a surprise to a lot of people. But there’s one very interesting part of the deal. From the box office receipts, a certain and not insignificant amount of money is being funneled into a fund for the Heckler, who’s still around. Money’s nice, and maybe it offsets getting beaten up, but to the person who has apparently succeeded in bringing the meaning of punk back down to two words, Nick 13: An apology is a better place to start.