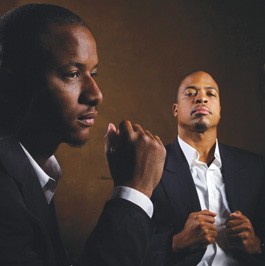 Two things happened in the hip-hop world last week that couldn’t have been more polarized opposites. Odd Future Wolf Gang Kill Them All, a collective group of teenaged MCs from Los Angeles prone to rapping about doing drugs and violating women, exploded across the music blogosphere. Though they’ve been releasing self-recorded albums for several years, last week marked the group’s first show outside of L.A., in New York, and every critic there stood up and took notice. OFWGKTM are young, brash, unapologetic and poised for notoriety—most likely the kind that escalates into fame.

Their manager is formerly from Interscope Records, and though they’ve already caused rifts among in-fighting critics over their warped, violent ideas, such rifts usually lead to free publicity and widespread buzz. Listening to OFWGKTM is like hitting up a shifty roadside menudo cart in Echo Park: scuzzy, rudimentary and cheap.

The other thing that happened last week was the release of the new album by Zion-I, which is more like comfort food. Zion-I is among the most talented groups in all of hip-hop, and like its predecessor The Takeover, Atomic Clock finds the duo of Zumbi and Amp Live switching up styles with each track, from the reggae-inspired “So Many Styles” and the Hammond-driven rock grenade “4u.” But despite encapsulating different genres, there’s an ironed thread to the production that wasn’t present on the jagged, electronic-sounding Takeover, perhaps in part by the presence of Atomic Clock‘s live band.

Unlike OFWGKTM, Zion-I won’t be causing lyrical controversy anytime soon, settling instead for hands-to-the-ceiling messages of unity. “The body’s here now, but the spirit lasts forever,” raps Zumbi on album opener “Always.” “Love conquers always, gotta keep your head up.” This is the type of conscious hip-hop that doesn’t get blogs particularly excited anymore, but for the ears, it’s pure gold.

Live, Zion-I has always been dialed in, but this weekend’s performance catches them in particularly tight form after a string of record-release shows. Don’t miss it when they rock the intimate stage with the Bayliens, Jason the Argonaut, True Justice and Coach Nubay on Saturday, Nov. 27, at Chrome Lotus. 501 Mendocino Ave., Santa Rosa. 9pm. $15&–$20. No phone.