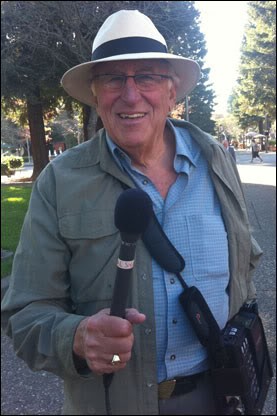 Mal Sharpe, ‘Man on the Street,’ in Santa Rosa

Today, while walking to pick up a sandwich, I was thrilled to see a man in a fedora with a microphone and cassette deck around his shoulder, interviewing people on Fourth Street. I approached. “Are you a Man on the Street?!” I asked. “Sure,” he said. “I’m talking about validation. Do you have any thoughts on being validated by others? Have you thought about that much?””Not really at all!” I replied.”Well, this’ll be good, then,” he said.

The next thing I knew, the tape was rolling, and the man began asking me about my upbringing, and about being validated—by my parents, peers and friends.”Do you think you could be validated by an inanimate object, like this flower pot?” he asked.”I can honestly say I have never considered the possibility before,” I replied. Validated by a flower pot?

And then in all seriousness, the man said, “Why haven’t you?”

Right then and there I figured the guy to be a total crank, and started wondering how I’d ever get out of his loopy clutches. But then he started talking about local businesses, and downtown parking, and it all became clear: he was conducting interviews about Santa Rosa’s downtown parking validation program.

Things opened up from there. I told him what I knew about downtown parking, and we bantered, and then I said I had to get back to work. “You’ve been fired,” he told me.

I saw a nametag on his microphone. “Wait, what’d you say your name was again?” I asked.”Mal,” he said. “Mal Sharpe.”

I couldn’t believe it. The Mal Sharpe. Of course. The surreal wit, the post-beatnik banter, the zany humor. Mal Sharpe, the definitive Man on the Street. Mal Sharpe, who with Jim Coyle revolutionized the art with a series of albums on Warner Bros. records in the early 1960s. What in the world was Mal Sharpe doing in Santa Rosa?”City hired me,” he said.

I don’t know how much longer Mal’s going to be on Fourth Street talking to people, but I do know this: you should get down there and be interviewed by him while you can. It’s a validating feeling, I tell you.