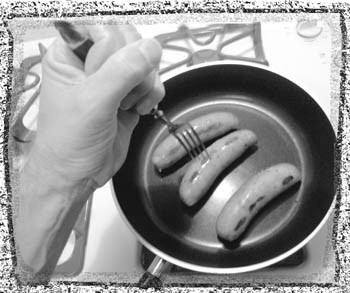 Art of sausage-making is a lesson on living

BRUCE AIDELLS, founder of Aidells Sausage Co., may be on the forefront of sausage innovation. But he still remembers 25 years ago, when he was just a poor post-doc in London, developing a strong revulsion to the indigenous sausagelike items called bangers. “They tended to be overcooked; plus they’re made with a considerable amount of bread crumbs, which makes them kind of dry and grainy,” recalls Aidells with diplomatic understatement. “I think it’s a cultural thing. You have to grow up with them to find them edible.”

Spurred by memories of the flavorful ethnic sausages of his homeland–Los Angeles–the young Aidells began experimenting in his own kitchen, and found the results a savory lifesaver. Aidells continued his self-education in Berkeley’s “gourmet ghetto” and opened his own sausage company in 1983. He was among the first sausage makers to put out the now commonplace chicken-and-apple sausages, and his innovative blends such as turkey andouille, lamb with rosemary, and chicken with tequila or sun-dried tomatoes helped put sausage on the culinary road map. Now Bruce Aidells’ Complete Sausage Book (Ten Speed Press; $21.95) gives home cooks a chance to get in on the trend, hands first.

Of course, there are other reasons besides trendiness to try sausage-making at home. One is quality control: you can skip the preservatives and pig lips, which are commonly used in the biggest commercial brands. For making sausage at home, Aidells recommends shoulder cuts, which are cheap, tasty, and easy to bone.

Aidells’ recipes also tend to be lower in fat than most commercial varieties, 15 to 25 percent fat, as opposed to 30 to 50 percent fat. There must always be some fat in sausages to keep them juicy. “We go as low as I feel comfortable with, without compromising texture,” says Aidells. “There are certain sausages that are even lower in fat, but they get dry and rubbery.”

Finally, with homemade sausages you have the chance to experience authentic flavors. In spite of his nouveau contributions to the art of sausage-making, Aidells’ sympathies lean solidly in the direction of the honest seasonings of traditional ethnic sausages, which are much more varied than one might guess from supermarket offerings. “When sausages, or any ethnic foods, go mainstream, they start to lose their ethnic identity,” says Aidells. “The texture and spices, the kind of meats, get lost in the mass-produced product. I mean, you’d be hard put to find something like our [supermarket] Italian sausage in Italy.”

Aidells and co-author Denis Kelly offer up a bewildering selection of sausage recipes, including six kinds of Italian sausage and eight from Louisiana alone. If you don’t live in a big city, near ethnic enclaves with their own meat shops, making sausages at home could be your best chance to try those spicy, Old World flavors.

FOR THE TIMID cook, Aidells has compiled a sizable collection of sausage-based recipes. But if you’ve an ounce of adventure in you, you’ll try to make some yourself, and you won’t be sorry. General principles are straightfoward for all but the most novice cook: keep everything clean, cold, and sharp. Sausage grinders are cheap, says Aidells–$30 through the butchers’ supply shop listed in the book’s resource section–but a standard food processor works fine, as long as you don’t overprocess. You don’t even need such gadgets, adds Aidells casually: “You can do it with a good knife.”

Right, I thought, and checked out Aidells’ recommended recipe for beginners, a Kentucky-style sausage. How hard can it be to cut up meat? Let my experience be a lesson: cutting raw meat by hand is both boring and challenging. If I had a rocking knife the length of my arm, like the German sausage-maker had 200 years ago, it might work, but even my Wusthof was no match for squishy cold meat. After 45 minutes of hacking, I ended up with more of a fine dice.

However disappointing my cutting was, the spices involved were a pleasant surprise. The usual suspects were there–sage, salt, a mountain of black pepper, and a molehill of cayenne–but there were also “sweet” spices in abundance, coriander, and nutmeg, giving the sausage a truly rich, complex flavor. I fried it up for a late breakfast, in patties that held together by willpower alone. And they were delicious. My verdict, though, and Aidells would probably agree: skip the knife and dust off the Cuisinart.

In sausage, as in life, almost every tradition has room for technology.