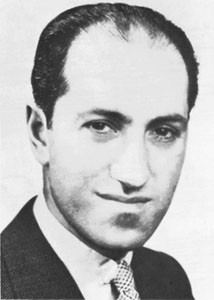 ‘Blue’ George: Gershwin’s ‘Rhapsody’ is a cornerstone of the symphony’s Fourth of July program.

‘I’ve played the Rhapsody more times than I can count, which is a lot,” laughs Jeffrey Kahane. The Santa Rosa Symphony music director is looking ahead to the symphony’s Fourth of July pops concert, at which he will be the featured piano soloist for George Gershwin’s Rhapsody in Blue. Gershwin’s best-known instrumental work highlights the outdoor afternoon concert at Sonoma State University, which both opens the summertime Green Music Festival and precedes a dramatic evening fireworks display.

Although he has often conducted the Rhapsody from the keyboard, Kahane is just pianist this time; guest conductor Alastair Willis of the Seattle Symphony will man the podium for the night. “It will be a great deal of fun for me to play this piece, which I’ve played so much having to do both jobs and only having to worry about one,” Kahane says. Willis will conduct the San Francisco Symphony in much of the same program a few days later.

When I ask Kahane if this reduced role and his love of Gershwin might combine to take this performance of the Rhapsody out of the realm of work and into the realm recreation, he laughs again, then waits a beat. “Almost,” he answers dryly.

For classically trained orchestra musicians, loosening up to play this swing era showcase was once a challenge, but Kahane assures that this is less true of the current generation. “With American orchestras, it’s pretty much second nature to play around with swing by now,” he explains. “I’ve noticed that if they haven’t done it for a while and they’ve been doing a lot of European music, sometimes you have to remind them a little bit to loosen up. The British orchestras also do that very well. Having said that,” he adds with a chuckle, “I’ve also had the experience of playing some of this music in Germany, and that’s a whole other thing!”

He also notes that the well-known full orchestral version of the work–the one he will play this time–is actually the second score that Gershwin prepared for the Rhapsody. “Gershwin originally wrote this for the Paul Whitman Band, and it was composed for a classic jazz ensemble which included just a few violins, no violas or cellos and a double bass,” Kahane explains, noting that the bass player was also expected to double up on the tuba (“that was a very common thing in those days”) and that the arrangement featured saxophones. “It’s a much more raw sounding Rhapsody in Blue than we’re accustomed to,” he says.

At the other end of the classical spectrum, this year’s Green Music Festival will again feature a series of four chamber concerts with a stellar cast that includes violinist Chee-Yun, cellist Alisa Weilerstein and the St. Lawrence String Quartet. Reflecting Kahane’s adventurous programming choices, three of the four programs will feature works by lesser-known modern composers, along with works from Saint-Saëns, Ravel, Bach, Schubert, Brahms, Dvorák and more.

“We have four concerts featuring 12 of the greatest chamber musicians in the world,” enthuses Kahane, who is also the Green Music Festival’s artistic director. “People have said, ‘What program should I go to?’ And I have only one answer: all of them.”

The chamber concerts grew in number from two in 2002 to four last year, and could become an even larger part of the festival in the future. “Once the excitement gets out there and the buzz is out about how remarkable these concerts will be,” the maestro says, “there is every reason to think we can expand it further.”

That expansion may also depend on whether–or how much–Kahane remains involved. Having announced in April that he will leave the Santa Rosa Symphony after the 2004­2005 season to become music director for the Colorado Symphony Orchestra in Denver, his future role in the summertime festival is uncertain. While it would not conflict with his new post, Kahane suggests that it will depend greatly on the development of the new, much-delayed Green Music Center facility, which is now expected to begin construction later this year.

“The hall was very much designed with the festival in mind, and my role in it is going to depend a lot on what happens now–whether it expands at the rate we all hope it will,” he says. “It’s still very much up in the air at this point. But I can tell you that certainly my hope and intention is to continue to be involved with the festival full-tilt.”