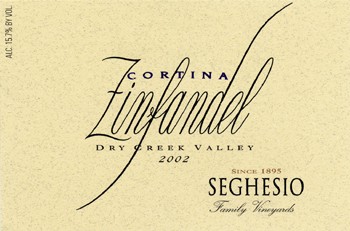 Lowdown: Sometimes you gotta know when to step into the family business. Ted and Pete Seghesio knew it was time to gently break the news to the senior Seghesios when the IRS came calling with a $4 million back tax bill a few years ago. During the winery’s middle age, the family cranked out nearly 150,000 cases annually–and critics said the wine pretty much reflected that. Bland, uninspired bulk product, the wine had lost the original vision of its founder, Eduardo Seghesio, who brought many of the varietals from his home in Italy.

Today, production is down to a mere 35,000 cases, with the vineyards being more carefully cultivated to produce only a fraction of what they once did. But many of the old Italian varietals remain the same–Barbera, Sangiovese, the relatively rare white Arneis and, of course, Zinfandel. Zin accounts for the bulk of Seghesio’s production and has been heralded as some of the best in the state. The tasting room itself, located just outside of Healdsburg, is remarkable only in its view of the large barrel rooms just behind the counter. So much wine, so little time.

Mouth value: Tasting at Seghesio is an education in Italian varietals. The 2003 Arneis ($15) is a unique bottling with a tart, fruity taste that works well for summer. Described as the winery’s Holy Grail, the Keyhole Ranch Pinot Noir ($28) is a personal favorite of the winemaker–an attempt to tame the notoriously finicky grape–with dark earthy flavors and coffeelike overtones. What you’ve come for, however, is the Zinfandel. The 2001 Saini ($30) is the more tannic of the two we tried, with grapier, brighter flavors. The 2002 Cortina ($30) is the better bet with deeper, more complex qualities and spicy red fruit–sort of a Julianne Moore slide to the Saini’s J.Lo shimmy.

Five-second snob: The Arneis grape has been cultivated since Roman times, according to the Seghesio staff, often planted as a filler grape. Because of its early maturity, the grape was sacrificed to hungry birds to keep their beaks off the good stuff. The name actually translates to “little rascal” because of its delicate personality.