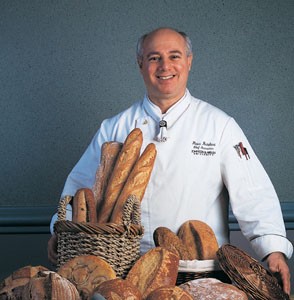 Dough Boi: Peter Reinhart expands his breadth of breads to include pizza.

Brother Peter discovers that pizza is as pizza does

There’s a lot that’s bad about moving some 30 times in your life, like forgetting what state you’ve just moved to or finding out they don’t have MTV in North Dakota. Or, let’s see, celebrating your most pivotal childhood birthdays at Ramada Inns.

But amidst the trauma of all that packing tape and bubble wrap, there are a few perks. Number one: the beauty of fresh starts (enough cannot be said about this). And number two: my cheese-soaked memories of eating pizza from sea to shining sea.

Before the Murphy’s Oil Soap had time to dry or the silverware was unwrapped, Dad had hauled the family wagon out for a large pepperoni and mushroom pizza in Bismarck, Houston, St. Louis, Pittsburgh . . . At this point in my life, I think I can safely say I’ve eaten pizza in at least three-quarters of the 50 states. And I loved every last pepperoni.

Like 94 percent of Americans, I am a die-hard pizza aficionado. Thick or thin, sauced or gourmet, I’ll eat it any way you slice it–and so will most of the rest of you. A recent survey by Bolla Wines found that 93 percent of us eat pizza at least once a month, for a total consumption averaging 46 slices per year. And–get this–studies show most three- to 11-year-olds prefer it over any other food. Shocking!

But as much as the commingling of cheese and tomatoes brings old and young together over the checkered tablecloth, the dark truth is that it can also be the great divider. Far beyond the anchovy debate and light years beyond ordering a soy-vegetarian pizza for the lone vegan in the office, pizza divisiveness gets ugliest over regional rifts that define one’s very soul.

Where do you draw your line in the dough? Are you a New Yorker–one of those rough-and-tumble urbanites who swears that his thin, folded slices of pie are the real deal? Home to the first American pizzeria, Lombardi’s, the Empire State leads the pack with its lengthy history and obsessive devotion to pizzerias. But is it the real deal? Yo, ask again and you’ll get decked, you crazy deep-dish eatin’ moog.

Or are you a Chicagoan, insisting that your mile-high pies are nothing short of perfection? After two years in the Windy City, I’m a convert. Then again, an inch of melted cheese could both win–and clog–anyone’s heart.

Confused? So was I. Will the real pizza stand up, already?

Ready to eat his way toward the answer, author Peter Reinhart takes both a practical and philosophical approach to the perfect pizza in his new book, American Pie: My Search for the Perfect Pizza (Ten Speed Press; $24.95). Reinhart– whom you may remember as owner of Brother Juniper’s Cafe and Brother Juniper’s Bakery in Santa Rosa–samples pizza from coast to coast trying to find the answer. Is it the crust, the sauce or simply the idea of the pizza itself?

Reinhart concludes that there aren’t any simple answers. A theologian, baker and philosopher looking for more than just a killer slice, Reinhart is looking for the answer to a bigger truth about how we eat. He describes a childhood memory of a perfect pizza from a restaurant in Philadelphia called Mama’s. Associating the stringy, cheesy goodness with a collection of boyhood rites of passage–basketball games, dating rejection, rowdy high school evenings, family dinners–the pizza was, in many ways, seared into his memory as the ultimate food. However, he proves that you can never go back when he later eats the pie in his adulthood and finds the crust just isn’t the same. It was still wonderful but somehow not the perfect pizza of his boyhood.

What was it about the pizza-of-then that was so magical? Perhaps, he opines, it was simply the synchronicity of time and place. It was a warm, safe, happy memory, much like mine, of family, friends and childhood. This goes on for a bit and is a theme throughout the book. But after a while, one can’t help but want our dear Brother to shut up with the philosophy, already, and get on with the search–and the recipes.

Thankfully, he does. Reinhart starts and ends his American search at Pizzeria Bianco in the most unlikely of places, Phoenix, Ariz. Owner Chris Bianco is a passionate crust-crafter who obviously shares Reinhart’s love for ritual and extols his own simple devotion to his best and first love: pizza.

After leaving Bianco’s benchmark pizzeria, Reinhart travels first to Italy–Genoa, Florence, Rome, Naples–to learn true pizza making in its native environment. It turns out that the Greeks, in fact, take credit for its invention, but let’s be honest here–no one travels to the Parthenon to grab a slice of pie.

In his journey, Reinhart describes the similarly divisive regional differences between the Italian passion for pizza (and its cousin, focaccia), from the Northern Italian focaccia col formaggio di Recco to the highly regulated pizza napoletana. In true Italian fashion, there is a government system that regulates standards for many Italian foods and beverages (mostly cheese and wines). The DOC, or Denominazione di Origine Controllata, makes sure any pizza that calls itself napoletana is made according to strict standards–only certain buffalo mozzarellas, crust ingredients, oils, etc.

Having befriended the many pizzaioli of Italy, Reinhart turns his peel back to the U.S. Traveling to New York, New Haven and the Bay Area (where he lauds tiny Pizzetta 211, Berkeley’s Cheese Board Collective and Roxanne’s raw pizza), to L.A.’s California Pizza Kitchen, to Dallas, Providence and Chicago, he ultimately concludes that pizza is as pizza does. It’s pretty much always good, but some good is better than other good. And though he never really does find that perfect pizza (though he claims Bianco’s is pretty darn close), his transcontinental hunt ends with his saying, “You now, sometimes it just comes down to the old truism: I’ll recognize it when I see it.”

The really useful part of the book continues with tips on how to make that perfect (or near-perfect) pizza at home. Reinhart explains how to bake with or without a pizza stone, and also discusses grilling pizza, types of cheeses, tools for the home pizza chef and the all important “windowpane” test for a dough’s consistency.

I tried making the neo-Neapolitan dough used at many East Coast restaurants. It’s supposedly crispier than many other types and uses both a dab of honey and high-gluten flour to give it a denser, crunchier snap.

Borrowing a stand-mixer, I followed the directions exactly and ended up with slightly sticky soft dough (just as it was described). I’ve never done the windowpane test before, and it proved a bit challenging. The idea is to gently stretch the dough until it creates a translucent “window” you can see light through. If the dough breaks or snaps, it’s time for more kneading. It took several additional minutes of kneading to achieve the effect, but the results paid off.

Pulling my pizza from the oven, the crust (though I used an aluminum pan rather than a stone) was crispy and less rubbery than earlier pizza-making fiascos I’d attempted. Oozing and dripping with cheese, my pizza clearly lacked perfection, however. A bit off-center, needing maybe two more minutes in the oven, the basil cut rather than torn, I pondered future improvements.

Devil in the Details

The foundation of a great pizza is the flour. Great bakers from around the country seek out San Francisco-based Giusto’s Vita-Grain Flour for its quality and robust baking properties. In the North Bay, high-gluten and regular unbleached Giusto’s is available in the bulk bins at Whole Foods. You can also purchase handcrafted specialty flours from Keith Giusto (a renegade Giusto from the same family) in his Penngrove bakery, Full Circle Baking Company, 10151 Main St., Penngrove. 707.794.9445.