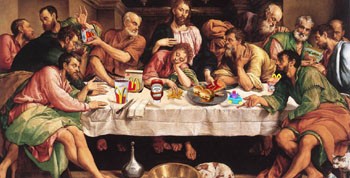 What Would Jesus Eat?: Perhaps a Go Active! lifestyle would have benefited the son of God.

A gentler, kinder McDonald’s wants to help you Go Active!

Here’s something most of us already know: Americans are fat. Nearly 65 percent of Americans are overweight and 31 percent are obese, according to the American Obesity Association. About 30 percent of children are overweight and 15 percent are obese. Fat is becoming our biggest and most expensive health problem, since obesity commonly leads to heart disease and Type II diabetes.

Obesity is a relatively new problem, only becoming an issue in the last 30 years or so. In that time, America has seen a shift to a more sedentary lifestyle, increased portion sizes and a vast proliferation of fast-food restaurants, among other things. There’s no doubt that the popularity of fast food’s high-fat menus has had at least some part to play in America’s weight problem.

In a four-page spread in the June 2004 issue of Redbook magazine, McDonald’s promotes its new “Go Active!” campaign. With columns of text, sidebars and a picture of a happy woman bounding up the stairs, it’s one of those ads that tries to look like an article, even though Redbook has printed “Advertisement” at the top of every page. Using an endorsement from Oprah’s personal trainer Bob Greene, the ad wants to help you “get going on an active lifestyle.”

Part of that help includes telling you about the “wholesome menu choices” at McDonald’s. First, you have the Go Active! Happy Meal, an adult version of the child’s Happy Meal that comes with a salad, a beverage and a pedometer. Then you have a list of “calorie-cutting tips,” which promotes some of its menu choices. This includes the salads again, the Chicken McGrill without the mayo (holding the mayo will save you 100 calories and 11 grams of fat), and the six-piece Chicken McNuggets with dipping sauce and bottled water, for a “340-calorie meal.”

Adding to all the abundant healthfulness is the active part of the plan: Greene promotes the 10,000-steps-a-day challenge, which urges people to move more by doing things like walking the dog, visiting local farmers markets and shopping–“now an official sport.” And, hey, you can even use your “Step with It!” pedometer to track your progress. The ad assures us that walking and picking the right menu choices at McDonald’s will make us feel so good that we “just might make it to the moon and back.”

Could it be that the fast-food giant now cares about America’s health?

Most fast-food restaurants have started offering healthier menu choices, but the reason for that may have more to do with competition than anything else.

“Offering healthy choices is more of a marketing and competition strategy,” says analyst Wally Butkus of Restaurant Research. “One chain will put something out and the rest of them will follow suit. They don’t want to be the one left holding the bag.”

But the idea of fast food as health food probably comes from Subway’s so-called Jared diet. Jared Fogle, a 22-year-old recent college graduate who lost 245 pounds in a year by eating nothing but two Subway sandwiches a day and walking the eight blocks form his apartment to the fast-food franchise as his “exercise,” was featured prominently in Subway’s advertising campaign. Despite the hand-wringing of doctors, Fogle’s diet made Subway the healthy fast-food alternative for many.

The recent attempt at McDonald’s to capture the weight-loss market includes promoting certain menu options and launching the Go Active! Happy Meal in May, shortly after CEO Jim Cantalupo died of a heart attack.

The new menu choices seem to be paying off, according to Butkus. “McDonald’s has done exceptionally well in the last six to eight months in taking the market share back,” he says. “Its profit margin has increased 15 percent, which is a huge increase. Usually, a two to three percent increase is considered large in this industry. It’s definitely working to give people the option of healthier choices, financially speaking.”

While most nutritionists seem cautiously optimistic about changes at McDonald’s, they also seem to feel that the company’s real motivation, aside from profit, is public relations. The company wants to reduce liability from obesity lawsuits and distance itself from public perception that it serves unhealthy food.

Last year, two obese Bronx teenagers sued McDonald’s, claiming the food made them fat and contributed to their health problems. The judge dismissed the case. In March, the House of Representatives passed the “Cheeseburger Bill,” which banned frivolous lawsuits against the food industry for obesity-related health problems.

Attorney John Banzhaf’s lawsuits against big tobacco led to the banning of cigarette ads from TV and instituted the tobacco-sponsored antismoking ads. He teaches a class at George Washington University nicknamed “Sue the Bastards” and is planning a series of lawsuits against the food industry.

“The people who wrote the bill are stupid,” he says. “They don’t know how to draft a bill. Let’s put it this way: none of the five suits I’ve been successful with against the food industry would have been stopped by this bill.”

But even if obesity lawsuits are stopped, the public impression that fast food contributes to obesity is a bigger danger to the restaurants. Movies like Super Size Me, in which documentary filmmaker Morgan Spurlock eats nothing but McDonald’s food for 30 days to disastrous results, only help that impression. McDonald’s was doing damage control before the movie even came out, most noticeably by eliminating super-sizing as a menu option.

“The McDonald’s announcement [that it will offer healthier meal choices] advances public relations more than it does public health,” accuses a statement from Michael Jacobson, executive director of watchdog group Center for Science in the Public Interest. “I’m glad that McDonald’s says it will promote its salads and hand out step meters and so on. Those are all good things. But if McDonald’s were sincere about promoting healthy eating, it would put calorie counts right on the menu boards.”

In the past, McDonald’s has not followed through on promises to change its food. When the nonprofit BanTransFats.com sued McDonald’s for cooking its fries in trans-fat-laden cooking oil, the franchise put out a press release saying it would reformulate the oil. The move received a lot of press, but according to the Center for Science in the Public Interest, the company never followed through with its promise.

So what about all this healthy food? Can we believe McDonald’s when it says some of its choices are healthy?

According to the McDonald’s nutrition guide, the California Cobb salad with grilled chicken has 270 calories and 11 grams of fat. It comes in a plastic carrier the size of a dinner plate. The salad is a mix of lettuces–though there’s still a high dose of iceberg–as well as carrots and grape tomatoes. It is topped with a bacon and blue cheese mixture and a fillet of grilled chicken. The grilled chicken has the chemical taste of added flavor, but with the Newman’s Own low-fat balsamic dressing (40 calories, 3 grams of fat) and bottled water, this version of the Go Active! Happy Meal is clearly a better choice than most of the other things on the menu.

The problem comes when, at every turn in the ordering process, there’s a chance to increase your calories. For example, when ordering the Cobb salad meal, there’s a choice between grilled or crispy chicken, water or soda and one of four dressings. The worst dressing is the Newman’s Own creamy caesar dressing, at 190 calories and 18 grams of fat.

McDonald’s has had salads on its menu for a long time, though it has improved them. But other items the chain is touting as healthier choices have been around for a while and haven’t changed that much. For example, McDonald’s has had the Chicken McGrill (400 calories, 16 grams of fat) for years, though it used to be called the grilled chicken sandwich. The only difference now is that people have the option of a whole-wheat bun.

And though the chain is promoting its new all-white-meat Chicken McNuggets, customers have always been able to order white-meat nuggets. The nuggets used to come in a mix of white and dark meat; workers could tell the difference by the shape of the nugget. For reasons perhaps too terrible to contemplate, the white-meat nuggets were always rounder.

Of course, “healthy” doesn’t just mean lower calories and fat. Nutrients, vitamins and chemical content all come into play. Fast foods are often heavily processed and loaded with chemical flavorings, additives and preservatives. After looking at the long list of ingredients for the Chicken McNuggets– a list including chicken skin, hydrogenated vegetable oils and an antifoaming agent called dimethylpolysiloxane– a New York judge recently called the nuggets a “McFrankenstein creation.”

Responding to the constant criticism that it markets its food to children, McDonald’s will soon start offering apple slices and a caramel dipping sauce as a substitute for fries in the children’s Happy Meals.

“I guess it’s a step in the right direction,” says Marlene Schwartz, a clinical psychologist at the Yale Center for Eating and Weight Disorders. “But the thinking needs to change so that the default is the apple slices. It should be that you have to ask for the fries instead of asking for the apple slices. I would rather see McDonald’s use its marketing power to get children to eat more vegetables and low-fat dairy.”

Many experts look favorably on the chain’s attempt to encourage people to move by handing out pedometers. Obesity researcher James Hill, a co-author of The Step Diet Book (which also comes with a pedometor to encourage walking), says, “McDonald’s plan is a good start. I welcome what McDonald’s is doing, but at some point we need to make this a big campaign, rather than a lot of small ones.”

Others are more cynical. Banzhaf believes that McDonald’s is promoting exercise so that the blame for obesity will shift off diet and on to a lack of exercise. But exercising for 30 minutes a day, as the government recommends, can’t compensate for the high fat and calories of a regular fast-food diet.

Like many, Banzhaf wants fast-food restaurants to post calories on the menu boards. He sees it the same as putting warning labels on food.

“Suppose a parent gave one of McDonald’s small toys to an infant, and a small piece broke off and the infant choked to death,” he says. “No court in the world is going to say that Mommy is solely responsible and the company is not, which is why when you buy those thing they come in bags with warnings all over them. Many of these problems are both personal responsibility and the responsibility of the companies that make the products.”

Many are offended by obesity lawsuits, believing that weight is a personal issue and should remain the responsibility of the individual. In addition, because of its size, McDonald’s is sometimes used as a scapegoat for industry-wide problems.

Still, the few obesity lawsuits that have happened so far have made quite a dent. Without them, it’s hard to imagine that McDonald’s would be encouraging people to Go Active! at all.