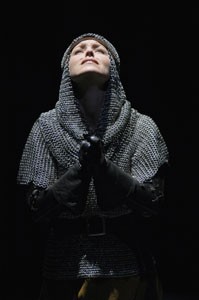 Jean, Dark: Tyler Layton is Joan of Arc in the ‘Henry’ trilogy.

A trip to Ashland is well worth the drive

The Oregon Shakespeare Festival in Ashland is a traveler’s festival. The annual eight-month-long event features 11 plays in rotating repertory, five by Shakespeare, the rest by classic and contemporary authors. Each year, the Shakespeare plays are a mix of famous crowd-pleasers and obscure, little-performed “problem plays,” like this year’s magnificent tackling of the Bard’s seldom-seen first play (actually, plays, plural), an epic trilogy about England’s least impressive monarch, Henry VI, a king who dreams of giving up the throne, and gets his wish, though not the way he wanted.

According to figures published by the festival, 88 percent of its audience trek more than 125 miles to attend plays during the festival’s run, and nearly half of its total audience travel from California, with about 7 percent from the North Bay. Last year, of the 381,000 tickets sold–approximately 120,000 actual theatergoers seeing 3 1/2 plays apiece–just under 10,000 seats were occupied by the Shakespeare-loving derrieres from Marin, Napa and Sonoma counties. Ten thousand people covering approximately 350 miles (one way) to see 3 1/2 theatrical productions, many of which were written by a guy who died over 400 years ago–that’s impressive.

The first, staged in the OSF’s intimate New Theater, is enormously entertaining, employing a hard-working cast, some playing several roles, in a tale about a young king (Henry, usually performed by the temporarily sinus-infected Cristofer Jean, but well-tackled the day I saw it by understudy Jason McBeath), whose disinterest in politics allowed the bloody War of the Roses to blossom around him.

As conceived here, the first part of the trilogy is less about Henry than it is about war hero Sir John Talbot (Jonathan Haugen) and a suitably brave but pleasantly unstable Joan la Pucelle, aka Joan of Arc (Tyler Layton), battling and debating over the fate of France. The play is a lean two hours long, and staged a little like a hockey game, with a fortress representing France on one side of the theater and England on the other, and with all the players ping-ponging back and forth in an attempt to score a military goal, it’s pulse-pounding, eye-popping fun.

Parts Two and Three have been ingeniously combined into one play, performed outdoors on the majestic outdoor Elizabethan stage. A slightly older, now-married Henry (Gregory Linington understudying for the still-ailing Jean) wrestles with his country’s political troubles, which include a hostile takeover attempt on part of the York family, descendants of Richard II, from whom Henry’s grandfather stole the throne several decades back. Henry’s biggest problem, however, is his wife Margaret (the amazing, elastic Robin Goodrin Nordli), a bloodthirsty mama on a par with Lady Macbeth, only less likely to ever go mad with guilt.

Stealing the show (and eventually, the crown) is James Newcomb as Richard, Duke of Gloucester, the handicapped hunchback who will one day become Richard III. Newcomb is funny and sarcastic, but also vicious and scary; he’s not the kind of guy who you’d want to appear in a room you are all alone in, which, sadly, is what Henry probably thinks when Richard shows up, grinning, late in this vastly enjoyable, unfairly demeaned play.

Newcomb nearly steals the show again as Dogberry in Much Ado about Nothing, the famous comedy in which Shakespeare serves up two wealthy couples, each of them becoming the subject of a separate elaborate plot in which their lives and futures are rudely messed around with. Giddy misogynist Benedick (Brent Harris) and sharp-witted, love-spurning Beatrice (Nordli) both detest one another, so of course they will be tricked (by friends, no less) into falling in love.

Meanwhile, young Claudio (Jos Viramontes) and Hero (Tyler Layton), who have fallen for one another upon first sight, will be very nearly torn apart by an evil conspiracy worked by nasty people (not friends) intent on wrecking the couple’s wedding.

Directed by Laird Williamson, this energetic, screwball comedy version of Much Ado is given a Jazz Age spin, with festive paper lanterns inching along above the set (again in the Elizabethan Theatre), and with characters clad in tuxedos and evening gowns as they leap about and hide behind bushes. While there are other side-plots, confusions and peripheral conflicts, any production of Much Ado depends on the dramatic believability of its two central couples, and these actors make their characters breathe with authentic puppy love.

Other highlights of this year’s festival are a very funny Las Vegas-style version of The Comedy of Errors, starring Ray Porter and Christopher DuVal as two sets of identical twins, separated at birth but thrown together by accident. Gangsters are involved. Lastly, Kenneth Albers plays the title role of King Lear in a gutsy, pagan-powered production that emphasizes the heartbreak of poor, deluded Lear, while having some first-rate fun with all the gooey villainy of the play’s many bad men and even badder women.

Lorraine Hansberry’s mighty American drama A Raisin in the Sun–mounted in Ashland’s amazing Angus Bowmer Theatre by director Andrea Frye–is among the strongest in an especially strong crop of non-Shakespearean plays. Dreams are at the heart of the beautifully staged Raisin, about an African-American family in 1954 Chicago. Though Richard L. Hay’s astonishing set is rooted in gritty realism (the Younger family’s apartment home not only looks lived in, it features a working kitchen sink and stove), throughout much of the play, a mysterious patch of bright blue sky hangs suspended over the set, fading in and out as the family’s dreams–mainly those related to owning their own house–slip closer to reality before lurching suddenly away.

The entire cast is first-rate, but it is Crystal Fox’s astonishing embodiment of world-weary Ruth Younger and Chris Butler’s heartbreaking rage as Ruth’s chauffeur husband Walter Lee that anchor the show in reality, while Pat Bowie’s steely and matriarchal Lena propels the story forward into the powerful “blue sky” of unbending hope and hard-won humanity. The show is proving to be a word-of-mouth favorite in Ashland.