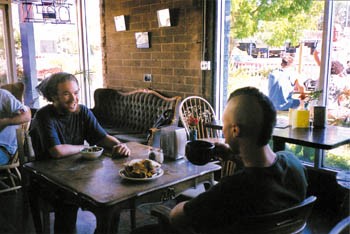 Not Just For Students: Leo Buc (left) and Sam Coble soak in the ambiance of Commie Market.

Are there any good places to eat around the JC? Now, yes.

Higher education is not synonymous with good eating. It seems to be a tradition that during the collegiate phase of life, one must fuel one’s fertile, studious brain with a parade of ramen noodles, burritos, sugary cereal, fried rice, and pizza. Cheap, convenient, and chock-full o’ fast-burning energy units, greasy starch is the way to go.

Down the block from my freshman dorm at Ohio State, there was a hole in the wall called Catfish Biff’s, which sold highly undistinguished pizza for a dollar a slice. Far into the early hours, ravenous young Buckeyes, their stomachs growling ferociously after pitchers and pitchers of piss-cheap beer, came to feed hangovers in the making.

We substituted key letters of Catfish Biff’s questionable moniker (they sold only pizza, not catfish) to create the less than loving nickname of Catshit Bits. For the very drunk or very broke, Catshit Bits was the place.

Such pizzerias, burrito joints, and coffee houses make up a sort of holy trinity of collegiate dining. With a junior college and a neighboring high school supplying hungry scholars both young and old, Santa Rosa’s JC area has multiples of all three, though notables are few.

For a pizza fix, Mombo’s, a relative newcomer, is in a class high above the Catfish Biff’s level. Mombo’s is prompt and efficient with its pies, which are New-York-by-way-of-Santa-Cruz (home of the first Mombo’s) style, meaning that the crust is thin and the topping options are eclectic.

I’m a purist and partial to plain cheese, which Mombo’s does well, maintaining a balanced cheese-to-sauce-to-crust ratio. Fans of more elaborate toppings have no shortage of choices, though. Mombo Vego with red onion, tomatoes, peppers, and mushrooms is tasty and colorful.

Mombo Blanco (fresh mozzarella, ricotta, and feta, with garlic, basil, and olive oil for good measure) has the sort of richness that very good homemade macaroni and cheese does. With fresh tomatoes, black olives, feta, artichoke hearts, and oregano, the Greco is more like dressed-up focaccia or flatbread and makes for a less filling (in a good way) change of pace.

What’s most killer about Mombo’s is its lunch special, which runs from the very liberal hours of 11am to 5pm. For five bucks, you get yourself one slice, a small green salad with an interesting celery seed vinaigrette, and a big ol’ soader. Plus tax, that’s a fairly wholesome lunch for $5.38–five times more than an emergency slice at Catfish Biff’s but five times more worth it.

Affordable and realistically portioned lunch specials aside, Mombo’s has a nice little atmosphere too, with hip, upbeat music, a bright and tidy eating area, and a friendly staff. I suppose if you’re not one to frequent JC haunts but do fancy a good pizza on a Friday night, it couldn’t hurt to give Mombo’s delivery a spin.

Of course, if you want atmosphere atmosphere, there is honestly only one place to go, and that is the Community Market Cafe–you know, where all of the hippy-gutterpunker-reggae-and-any-mixture-thereof kids hang out (or loiter, depending on your perspective). The place used to be Higher Grounds, and the interior has altered little since the switch over.

Commie offers the typical lunch fare: sandwiches and salads and soup. I tried an Italiano (avocado, basil, tomato, cucumber, romaine, “vegenaise,” and mustard on choice of bread with organic corn chips for $ 5.99), and while the Italian-ness of this particular combination eluded me, it was a satisfying (if slightly bland) sandwich.

The one thing about Commie is that the lunch menu there, which is beautifully well-intentioned, tends to fall very much into the tired and cruel cliché of lackluster hippy food.

Case in point: going out on a limb, I ordered the special, which happened to be samosas (tasty little fried, savory Indian pies with a potato and pea filling) on a bed of cabbage and carrots for $6.50. And that’s exactly what was on the plate: three lukewarm and too-chewy samosas on a gigantic but prettily arranged pile of roughly chopped cabbage and coarsely grated carrots–which were naked, as in undressed and unseasoned. On the side was a little cup of simple dressing that tasted like apple cider vinegar mixed with apple juice.

The samosas were OK–actually, they were better than the samosas you get at most Indian restaurants, because they did not sit in the stomach like lead, giving you that too-much-cheap-Indian-food feeling. The “slaw,” though, had some problems. You have to really, really love cabbage to eat a hunked-up mound of it with only the assistance of apple cider vinegar and a few carrots. It’s about as appetizing as sitting down to a halved raw potato.

I wanted to wrap up a copy of Deborah Madison’s Vegetarian Cooking for Everyone and give it to the kitchen staff and say, “Look! Deborah is a goddess, and she says it doesn’t have to be like this! Food can be vegan, whole-grain, wholesome, and full of flavor! You can have your oat cakes and eat them too!”

But some people, I realize, really do like to eat raw cabbage, and I suppose they are entitled to eat out too. Those of you who enjoy Diet for a Small Planet food circa 1974 can go to Commie and take the crapshoot with the lunch specials. Otherwise stick to the menu.

Soups over the summer have included a delicate, delightful melon soup–light and fruity, almost dessertlike–and a chunky gazpacho. The coming cold weather is sure to prompt some good, hearty options. Or go there for a stellar breakfast. After ordering the daily scramble special one recent morning, I looked at my plate and thought, “This is more like it.”

For $5.99 the Santa Cruz scramble has black beans, corn, onion, zucchini, peppers, and cumin, and a generous side of well-seasoned grilled potatoes. You can substitute tofu for the eggs, if you wanna. No toast, though. For $5.99 you figure you’d get a few slices of bread, but as is it’s still a wonderful breakfast that fills you up without leaving that greasy breakfast hangover feeling. Toast, which you can get on the side for $1.99, might be gilding the starchy lily.

Commie’s greatest asset, ultimately, is its laid-back, settled-in feel. There are very few nonrecord stores around here where you can regularly hear Tom Waits or the Smiths on the stereo. Unlike the vast majority of its franchised, cookie-cutter Mendocino Avenue kin, Commie has a true personality and sense of place. It is a hangout you actually want to hang out in.

With mismatched chairs and tables, the all-important coffeehouse velvet sofa, piles of good reading material, local artwork (of varying quality) on the walls, and huge windows to peer out at scenic Mendocino Avenue traffic, Commie is practically the only JC eatery that reflects its proximity to a college campus. A newly reinvigorated music schedule adds to the true hangout vibe.

Plus, it’s one of the few places where you can take solace in the fact that, no matter what, there will always be someone there whose outfit is worse than yours. It’s comforting in a scrappy kind of way. A nurturing way, not a Catfish Biff’s way.