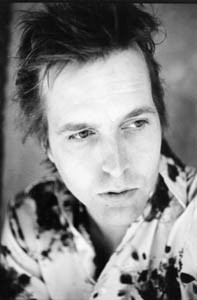 Chuck Prophet is exploring the Mason-Dixon Line of the mind. As a member of the long-defunct Green on Red–the Paisley Underground band that during the ’80s crafted a rustic roots-rock sound laden with punk sensibilities, and served as a precursor to the current crop of Americana artists–the San Francisco-based singer, songwriter, and guitarist often visited Memphis blues and blue-eyed Southern soul in his songs. A longtime associate of Memphis producer and keyboardist Jim Dickinson–who helped countrify the Rolling Stones’ Sticky Fingers sessions and produced landmark albums by Big Star, Jason and the Scorchers, and the Replacements–Prophet has delved deeply into the Southern regional music milieu.

“Jim was a huge influence on me when I was about 20 years old and we first started working together in Green on Red,” says Prophet over the phone from a truck stop outside Nashville. “He taught us so many things and had a profound affect on our approach to making records. He always encouraged us to wave our freak flag high and always be willing to offend ourselves.

“I mean, Jim Dickinson’s philosophy is that pop music shouldn’t be trusted and making records is a moral act. After all, you’re making something that’s good or bad. Yeah, I learned a lot of things from him: just those basic principles of space and time and physics.”

Self-effacing and laid-back, the Whittier-born Prophet started playing alt-country right out of high school as a member of Green on Red, which also featured Dan Stuart and Chris Cacavas. Prophet eventually recorded one EP and eight albums with the band for both indie and major labels. The band became closely identified with the then burgeoning L.A.-based Paisley Underground, a loose-knit, neopsychedelic collective that also included the Dream Syndicate, the Three O’Clock, Rain Parade, and the Bangles (before their big-hair days).

“By the time 1981 had come around, hardcore punk had managed to alienate a lot of folks who had gotten into it when the vitality and the excitement and all the possibilities it seemed to offer initially were turned into a uniformed Nazi approach to things,” Prophet explains. “The Paisley Underground was a reaction to that. Also, it was inevitable that people who had grown up listening to the Beatles, the Mamas and the Papas, and all that kind of stuff coming out their car radios would create a musical movement that reflected that.”

Still, Prophet balks at the suggestion that the Paisley Underground was a real musical movement. “Everyone brought something different to the table,” he says. “Bands like Dream Syndicate, Three O’Clock, and Rain Parade all owned record collections and knew about Syd Barrett and other psychedelic minutia. We didn’t know shit about that. Green on Red was just a white-trash rock and roll band.”

Green on Red disbanded in 1992. Prophet has since released several critically acclaimed solo albums. Yet Prophet and his old cohorts are widely recognized these days as forerunners of the modern Americana movement, which has spawned the likes of Son Volt, Uncle Tupelo, and Wilco.

Despite critical acclaim for his role in such one-off projects as Raisins in the Sun (an all-star alt-country and blues lineup that set out a few years back to write and record an entire album in one day) and Go Go Market’s Hotel San Jose, which he likens to “a postmillennial, freaky frat-boy, Booker-T.-with-turntables sort of thing” created by his wife and musical partner Stephanie Finch, commercial success remains elusive.

“For better and mostly worse,” he says, “the approach has always been to make the records that we thought we would like. We figured that if we like it, then other people will.

“We were just way wrong,” he adds with a sly laugh. “Way wrong.”