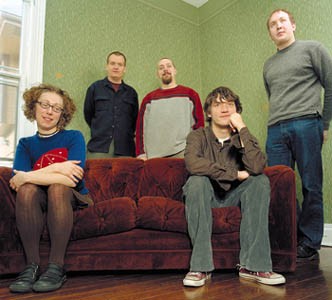 You Can’t Keep a Good Band Down

Cursive heads up a mighty bill of noise at the Phoenix

The Omaha, Neb. band Cursive, whose name most likely rings unfamiliarly unless you are one of the legion of fans, was all set to embark on a West Coast tour this summer. They didn’t get too far: on June 8, the band’s lead singer and primary creative force Tim Kasher suffered from a collapsed lung, and they were forced to cancel all of their upcoming tour dates.

After spending nearly two weeks in the hospital recovering from surgery, Kasher did what any convalescant would do: He went into the studio with his band and recorded an album.

At first listen, Cursive has all the marks of an emo band: loud/soft/loud instrumentation, touches of punk and hardcore, and vocals that go from delicate to blisteringly raw in a matter of seconds. What sets Cursive apart is that even in their most menacing moments, there’s a fragility and humanity to the band’s songs that you don’t encounter often in the emo genre. From Kasher’s pen and throat, Cursive’s songs display emotional vulnerability not through mopey despair but with aggressive frustration.

Kasher’s lung is getting better every day, and Cursive is now back on the road, joining up with Thursday for the Plea for Peace/Take Action Tour. The Ugly Organ, the fruits of Cursive’s recent stint in the studio, will be out sometime in February. It will be their first full-length since 2000’s terse, poetic, and turbulent Domestica, a cycle of songs depicting the breakup of a marriage that paralleled Kasher’s own divorce, as well his dissolution of Cursive itself (the band obviously got back together).

Domestica so hauntingly painted the decay and implosion of a relationship through angular, jagged intersections of guitar and Kasher’s scream/sing/whisper vocals that fans and critics attached themselves to it to the point that the album became almost confining.

Since then, Cursive has overcome the obstacle of following up a masterpiece by breaking expectations. The band became a quintet with the addition of cellist Gretta Cohn and released two EPs. The forthcoming Ugly Organ will feature Cohn’s cello moving into a more prominent role in the mix and adding a darker, chamber-music feel that intensifies the internal drama of Cursive’s songs.

If there have not been too many shows with more established local indie bands in the past year or so, the reason is twofold. First, there’s the obvious: the lack of an appropriate venue. But the second reason–that well-established local bands like the Velvet Teen and Benton Falls are simply not around as much because they are out touring–is a good sign, a testament to their dedication as well as their talent, and a reminder that it’s important to maintain a community that fosters and encourages that kind of creativity.