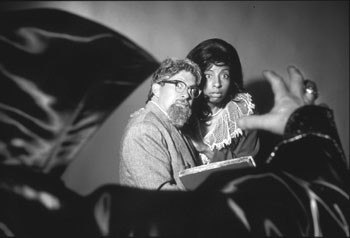 S.F. Mime Troupe is anything but silent

“THE LAST president may have felt the nation’s pain, but this president promises to be responsible for it,” proclaims a guy on stage doing a remarkably effective Bush impersonation. Ten minutes later, another character is calling the goofy G.W. impersonator the “idiot son of a pencil-necked criminal.”

If Bush-bashing is a sport, this is the Olympics. And the large crowd gathered under cloudy skies in this Berkeley park–mostly graying boomers and their offspring–is eating it right up.

But this production has more to offer than politics. Even little kids who wouldn’t know a tax-cut proposal from a strategic defense initiative start paying attention when a giant vampire bat swoops down on the stage and starts sucking the blood out of a hapless journalist–some poor bastard named Renfield who asked too many tough questions during a song-and-dance version of a White House press conference.

Welcome to 1600 Transylvania Avenue, the first musical melodrama about corporate bloodsuckers taking over the White House. Naturally, it’s a production of the San Francisco Mime Troupe, currently celebrating its 40th season of radical public theater performances in the Bay Area.

“We are a mime troupe, but we’re just not a silent mime troupe,” explains Andrew Sullivan, a 13-year company veteran who is the principal writer and director of 1600 Transylvania Avenue.

It’s not the first time Sullivan, 40, has had to explain this. And it won’t be the last in a nation that stubbornly associates the word mime with the white-faced antics of Marcel Marceau and his countless imitators.

“There are different forms of mime, and in the ancient form of mime, actually you can talk,” Sullivan continues, going on to explain that the troupe derives inspiration from the tradition of commedia dell’arte, a humorous but socially conscious form of popular theater that flourished in Europe from the 16th through the 18th century.

So you won’t see San Francisco Mime Troupe actors pawing at pretend walls or drinking invisible glasses of water. But you will see them sing, dance, and sometimes suck a little blood as they stage high-energy musicals about hot-button political issues ranging from racial stereotypes to public health care.

And as you might guess from the red star that hangs over the stage, these folks have a definite point of view.

Of course, if the mime label is tough to overcome, a reputation for political theater might be even worse. When a political agenda intersects with the stage in America, bad things often happen–like deadly dullness. But that’s one rap that has never stuck to the San Francisco Mime Troupe.

Over four decades of existence, the company has built a solid reputation for innovative, entertaining theater. Along the way, the troupe has picked up three Obie Awards and a Tony Award.

Of course, it was hard to be boring back in the troupe’s early days, when company founder R. G. Davis was getting busted by the cops for staging “obscene” performances in public parks and a young Bill Graham had to organize a benefit concert to raise bail money.

These days, the cops can’t be counted on to liven up the scene. But that’s OK, because the troupe doesn’t do dull. The company’s time-tested formula of musical comedy plus slapstick plus politics has become increasingly popular. Sullivan says the first weekend of 1600 Transylvania Avenue was the best-attended opener since the troupe has kept records.

What’s the secret to this success?

“I think one of the problems that happens a lot in political theater is that they try to give you all of the facts and get you to change your mind during the course of the show,” Sullivan says. “What we’re trying to do is get people to open their minds up to possibilities.”

That’s not the only criticism Sullivan levels at the way theater tends to tackle social issues.

“A lot of political theater is really just satire,” he says. “They make fun of events without having a point of view, which I think actually disheartens people. If you feel like your government has taken this big swing in a direction toward oppression, it’s not really that funny.”

Which is not to say that humor isn’t a big part of the troupe’s productions.

“The comedy comes from how the characters react in the circumstance and kind of pushing it to a ridiculous point,” Sullivan explains. “But we want to make sure the audience understands the import of what’s going on.”

But while mixing serious politics with slapstick humor might seem only natural in a world full of Bill Clintons and Trent Lotts, it’s not always easy. Sullivan labored mightily over the script for 1600 Transylvania Avenue, staying up writing until the early morning and then working in the troupe’s usual collaborative fashion with the actors.

That collaborative process helps ensure that the actors’ hearts are in their performances–and it shows in the current production. Amos Glick is deeply hilarious as the president, a malapropism-spouting corporate bloodsucker who comes off like a retarded version of the Count from Sesame Street. Anastasia Coon is excellent in the role of Lucy Morgan, a good-hearted entrepreneur transformed into a vampishly seductive minion of evil. And Velina Brown puts her excellent singing voice to good effect in the role of Shamina Jones, the play’s intrepid heroine.

MOST TROUPE members, like Sullivan, are in it because they believe in the troupe’s socially conscious mission. They certainly aren’t doing it for money. Back in the 1960s, actors were paid 50 cents for each performance. The money is a little better today, but most members of the company take outside work to survive, and escalating rents have even forced a couple to live outside of San Francisco–a social problem that the troupe scrutinized in last year’s City for Sale.

“We don’t pay nearly as much as Web Van. But then again, we’re still in business,” Sullivan notes with a laugh.

And the troupe has no problem attracting new talent. One up-and-coming collaborator is Petaluma resident Jason Sherbundy, formerly associated with both the Cinnabar Theater and the Savoy Swingers. Sherbundy serves as musical director on 1600 Transylvania Avenue.

The troupe itself often has to scramble for money. They’re lucky enough to own a warehouse in the Mission District, which kept them from being burned by the red-hot rental market. But the company used to have an ambitious touring schedule that took it across the country and even around the world. Sullivan says the dramatic cutbacks in federal funding for the arts have had a serious impact on the company’s ability to find colleges and other venues that will sponsor them.

But the San Francisco Mime Troupe seems to be able to increasingly count on audience members to open their wallets and support the show.

Sullivan says more donations were collected at this season’s opening weekend than ever before.