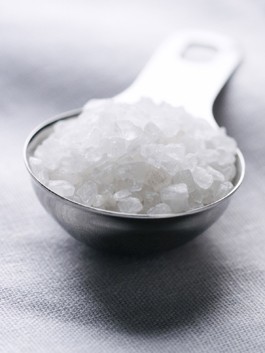 W riting with a feverish sparkle not commonly found in the jaded prose of veteran food journalists, Los Angeles Times correspondent Russ Parsons penned a glorious ode in November to the marvels of salt-roasted foods. He was evidently served two salt-encrusted shrimp tableside at a fashionable L.A. restaurant and pronounced them “profound.” He went directly home and embarked on a two-week salt-roasting odyssey that found not even pears safe from his new mania.

For reasons the National Salt Institute can’t perfectly parse, salt-roasting does not at all produce salty food. Rather, the salt melts at high heat and forms a protective layer around the comestible, both roasting and steaming the food, which is subsequently extracted from its white blanket, often encased in a shell so hard it needs to be cracked with a hammer.

All of which sounded intriguing to this exhausted holiday-maker, something good to maybe try someday. And then I went to a party where a sport fisherman was happily mixing up a bowlful of what looked like dirty snow in a kitchen packed full of people jostling for more wine and another stick of satay. He was preparing to salt-roast a five-pound salmon he had caught this fall, but I was the one hooked.

Stirring six cups of kosher salt in a huge bowl, he added a scant half-cup of water, six beaten egg whites and a large handful of chopped rosemary. Preparing a deep-sided pan just larger than the salmon, he lay a bed of the salt about a quarter of an inch thick down before putting the fish, which was cleaned but still had scales, a head, dead little eyes—the whole bit—into the pan.

Then he inserted a thermometer, mounded the rest of the salt onto the fish and put it into a 350-degree oven for 20 minutes. When the fish’s internal temperature hit just 125, he pulled it out and let it rest in the pan for another 20 minutes. The fish was then disinterred to reveal a crust just like Parsons promised. That was broken with a heavy spoon, the fish lifted out and its body cleaned with a dry pastry brush to remove errant crystals.

Indeed, the salmon was profound, the salmony-est of fish, the sweet, buttery essence of its truest flavor, a salmon to make Plato himself proud.

With wild salmon out of season until May, the true stay-at-home-and-futz-in-the-kitchener can rejoice that potatoes and pork loin also take brilliantly to this preparation. Omit the egg whites in the salt mixture and sear the pork loin first to ensure that the New White Meat remains a slogan and not your dinner. The oven should be hotter, 400 degrees, but the meat needs only 20 minutes in before coming out to rest. Nothing need be done to the potatoes—fingerlings are the darling of the salt-roasting set—other than a good scrubbing. Again, layer a pan larger than the loin with the prepared salt, place the seared meat and the clean potatoes in, and mound over. The rosemary infuses both foodstuffs delicately and they emerge at the perfection of pork and pinnacle of potato. Perfecto.