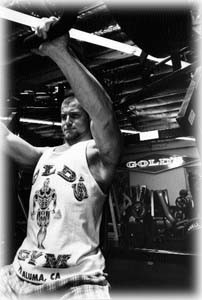 Pump It Up: David Ramfier feels the burn at Gold’s Gym in Petaluma.

‘Best of’ local recreation–
feeling laid back or laid out?

DID YOU EVER SEE that movie The River Wild, the rousing flick with Meryl Streep taking her family on a white-water rafting trip? Well, guess what? Though the movie tanked at the box office, and only did so-so in the video stores, this simulated river ride was still experienced by more people in its first month of release than the national yearly average of folks who actually wentrafting–or for that matter even dipped their toes in a real, live river. We are a nation that prefers to watch other people breaking a sweat while fantasizing about how much better we’d do it, if we only had the time. We at the Independent find this disheartening, and though local statistics on this subject are unavailable, we are certain that if the survey were taken in Sonoma County–land of rivers and coastline and mountains and trails and really cool exercise clubs–the results would have been far less predictable.

Red-tail hawks circling in the warm morning drafts. The sound of feeding waterfowl. The cool sensation of coastal fog against your cheeks. The musty scent of a teeming marsh. The 250-acre wetland restoration project at Chanslor Guest Ranch and Stables is one of the county’s most beautiful places–and one of its best-kept secrets. Located about a mile north of Bodega Bay and bisected by Salmon Creek, Chanslor Ranch boasts a bed and breakfast and a horseback riding stable. But it is the wetland that is the real jewel–a rich habitat to local bats, shore birds, and raptors, and home to such sensitive and endangered species as steelhead and coho salmon, the tidewater goby, the northern red-legged frog, California freshwater shrimp, and western pond turtles. The gentle, rolling hills provide a hearty, but not too strenuous climb suited to young and old alike. Ecologist Michael Fawcett offers guided nature hikes by appointment only. Adults, $10; children under 12, $5. 2660 Hwy. 1, Bodega Bay. 875-9861.–G.C.

Best Spot to Search for Spouts

Every year hundreds of California gray whales make their an annual 5,000-mile trek to birth their calves in the waters off Baja. You can travel there to see them, but if you don’t have the cash or the time, this time of the year you can just drive over to Bodega Head–one of the farthest points out to sea in the county–to catch a glimpse of these stately, 42-foot-long creatures. On weekend afternoons, docents are on hand to show you how to look for spouts, narrow geysers shooting up from the sea, and easy to spot when the sea is calm. If you’re lucky, you may catch a glimpse of a humpback, too. At the several-hundred-acre state park you’ll find well-worn trails, secluded beaches, and breathtaking views of the coastal panorama. But a warning. The cliffs are steep, the ocean is mighty, so be careful. To get there, take Eastshore Drive off Hwy. 1. Drive west until you can go no farther.–S.P.

Best Place to Learn the Ropes

There are calmer places to ponder one’s mortality than while trembling on a small wooden platform several stories up a redwood shaft. But there is no more exhilarating way to get down than the simulated soaring that is a peak experience for participants in the Four Winds Ropes Course, the outdoor “experiential training” offered by a company that has been operating for the past 10 years in a wooded canyon at Ocean Song Farm and Wilderness Center. The 11,000 visitors each year include a few curious individuals, but most are groups, such as business organizations, leadership teams, schools and youth groups, social clubs, and even therapy groups. The challenges of the course have more to do with cooperation and creative thinking than physical exertion, although some of that is required, too. As for a greater sense of self-knowledge, it’s there for the taking, too. Four Winds Inc., 7765 Healdsburg Ave., Suite 11, Sebastopol. 824-0917.–B.R.

Best Place to Pursue Endorphins,
Espresso, and the Great Outdoors

“We’re pretty much in outlaw mode out here,” muses Tom “Snap” Gonnella, the laid-back scion of an old west county family and owner of Gianni Cyclery in Occidental. He’s talking about bicycle racing. Gianni hosts numerous bike races each year, including the grueling Ring of Fire contest, unsanctioned by the major bicycling organizations. That way, the $10 entry fee trickles back to riders–“not to dictators”–via cool prizes and free food. “A racer should always get some food,” judges Gonella. Biking enthusiasts rave about the good vibes, the pancakes and coffee, and the gorgeous paths that take pedalers past giant redwoods, lush ferns, and lots of poison oak (thus the name). Winners get a can of Taylor Maid Organic Panic coffee, a loaf of Great Harvest bread, a bottle of Gianni Cyclery hot sauce, and the pride of being top dog. The pint-sized bike shop fields Team Gianni, which lives to ride by Snap’s simple creed: “Don’t quit, and have a good time.” 874-2833.–D.B.

Best Place for Great Legs
in a Hobbesian Universe

Soccer, the largest spectator sport on the planet, boasts about 17,000 participants in Sonoma County, making it the fastest-growing, most popular–and populist–game in town. Over 14,000 boys and girls ages 5 to 18 form the majority of soccer fanaticos kickin’ it around locally. Add to this swarm 1,300 high school players, a women’s league, a co-ed league, the Inter-American Soccer League known erroneously to gringos as the Latin League, a thriving over-30 men’s league, an overflowing indoor soccer barn, and even an a cohort of over-48 men who grow more devious as their legs slow down. Leagues typically arrange teams in several divisions to ensure relatively even competition. Occasionally men’s soccer can deteriorate into a rabble of trash-talking, puffy-chested roosters. But most players defer properly to the referee as the leviathan in this Hobbesian universe and stick with the fundamentals of dribbling, passing, and shooting.–D.B.

Best Way to Laze Down a River

You can count of plenty of company when you glide down the lower Russian River: turtles, herons, crayfish, bass and catfish, an otter if you’re lucky, or perhaps a raccoon. Oh, yes, and other folks in canoes, too. From a quiet private beach just off River Road at Mirabel Road in Forestville, Burke’s Canoe Trips dispatches dozens of sleek silver vessels daily through the summer months to meander downstream to just north of Guerneville. There, all you have to do is drag your craft up onto the sandy shore, gather your belongings, and take a short walk back up to the road to catch the funky old school bus that will shuttle you back to Burke’s parking lot. It’s about a 10-mile trip, typically accomplished in three to four hours. Along the way, there are other beaches–some secluded, some quite populous–a couple of bridges, and a few mildly tricky curves to negotiate. These get somewhat rearranged by the rampaging winter waters each year, but the essence of the trip remains unchanged: a leisurely way to appreciate nature while catching rays, snacking on whatever guilty pleasures you bring along, and wondering why you haven’t gotten out and done this sooner. 887-1222.–B.R.