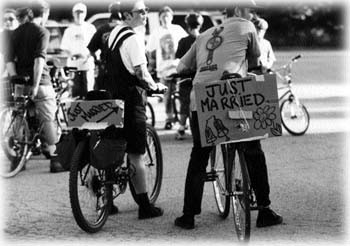 Inventing the Wheel: The Critical Mass rides attract even the newly married to these monthly activist rides.

By Dylan Bennett and Gretchen Giles

ON THE LAST FRIDAY of March, the parking lot of Santa Rosa’s Howarth Park is charged with the balmy sunshine of spring and the anticipation of direct political action. Roughly 200 bicyclists converge on the asphalt: riders straddling unicycles, kids–some as young as 11–skateboarders, self-styled eco-punks, and committed bike commuters. Most of the riders are male, most are young. But included in the rabble of teenage boys in T-shirts are a few women: a mother and her 13-month-old baby; a woman elegantly attired in black pantsuit with a frilly white shirt. Almost no one is older than 40.

For over an hour in Santa Rosa’s rush-to-the-weekend traffic these self-powered, wheel-borne travelers will be kings of the road. The event is officially known as Critical Mass, the growing leaderless pro-bicycle protest movement. By converging on city streets at peak hours on the last Friday of each month, these activists put their mettle to the pedal to push the point that “bicycles don’t block traffic, bicycles are traffic.”

The goal is twofold: to legally inconvenience motorized vehicular traffic in a demonstration for improved bicycle traffic laws, more bike paths, and greater environmental awareness about cars; and to have a wonderful time. Spawned through equal amounts of activism and athleticism, Critical Mass rides began in San Francisco around 1992 (participants are unsure whether that monthly event is now celebrating its third or fourth birthday; that’s part of ride’s renegade charm) with participants gathering in the wharfside cool of Justin Herman Plaza.

“In the beginning,” remembers Sonoma resident Michael Teller of the monthly San Francisco run, which sometimes involves upwards of 2,000 people, “someone would just get up on a pole and yell, ‘Who wants to go to Stern Grove?’ Now they have a megaphone and route maps.” Bicyclists also take it to the streets in cities nationwide and internationally, including cities in Spain, England, Poland, Brazil, and Switzerland.

Critical Mass got critical in Sonoma County last April, inspired in part by the “Folks on Spokes” bicycle exhibit mounted by the Sonoma County Museum. Participants, including stalwart members of vintage-bike clubs, organized the first run to correspond with the museum’s opening reception. According to Rotator Bikes owner Steve Delaire, “There were an awful lot of people in town who were going to San Francisco already,” making Critical Mass ripe for the county. While Delaire still pedals up to the Howarth Park event occasionally, he acknowledges that a younger crowd has claimed the run for their own. “The kids from the college have done a great job.”

The Critical Mass brochure and info.

About Critical Mass in San Francisco.

Riders pride themselves on their lack of formal organization and leadership. Nonetheless, back in the parking lot, Santa Rosa resident Paul Ulanowski–decked out like a humanoid insect in helmet, glasses, goatee, gloves, tattoos, and tights–takes charge long enough to announce the route to everyone.

Urging the crowd to take the pro-bike movement to the federal level in order to win equal rights for bicyclists, Ulanowski speaks with exuberant conviction, claiming he has not driven a car for three years. “I’ve been hit by three cars,” he says. “Since I gave up my car, I’ve biked 3,800 miles in six months. I ride because of the rising costs of cars and the crappy state of public transportation. By riding, I take care of myself and the environment.”

Santa Rosa Police traffic sergeant Brad Marsh stands next to his squad car in the late-afternoon sun, not far from the shimmering surface of Lake Ralphine. “We are here to monitor, not to escort, the bicyclists,” he says. While police regularly ride with the San Francisco contingent, this is the first time that the Santa Rosa traffic department has been in attendance, a direct result of minor motorist/bicyclist shouting matches that broke out in February.

“Do you believe there’s a place on the road for bicyclists?” a young woman with assorted body piercings asks the officer. “Absolutely,” he answers from behind his dark reflecting sunglasses, “as long as they don’t create any dangerous situations and adhere to the rules of the road.”

“We’re trying to keep them restricted to one lane,” says Sgt. Tom Swearingen, “and that’s difficult to do because there’s no leadership.”

The ride, scheduled for 5 p.m., starts a little late with a fusillade of cheers as the swarm of bicycles pour slowly onto Summerfield Road. “It’s a chance to ride en masse and not be harassed by cars,” says Michael Teller, who admits that he has no compunction about stopping his bike directly in front of a vehicle to clear the road for his fellow Massers. “And that’s about the only time [that bikers are unmolested by auto traffic]. Plus, there’s the idea of taking over the streets.”

Whether the police presence is an “escort” or a “monitor” is irrelevant semantics. Kickstands are upended and the crowd begins to move. Sgt. Marsh’s squad of three motorcycle patrolmen on shiny Harley Davidsons, supported by a few police cars, accompanies the Critical Mass ride for 90 minutes, lending the pomp of a parade as the cyclists ride down Summerfield Road, loop through Santa Rosa, and end at Courthouse Square.

Along the route activists distribute a 14-page pamphlet titled “Critical Mass Info Booklet (Why Cars Stink).” Designed to indoctrinate those motorists who are stuck in traffic, the pamphlet presents perspectives on the social, ecological, and economic impact of cars. “I do it for the environmental bent,” says Delaire. “I don’t think that people realize the cost of cars. The biggest issue is pollution.”

Santa Rosa Junior College student Dave Gordon, 20, says he gave up driving because he couldn’t afford it, and didn’t want to anyway. “[Cars] are expensive,” he says. “And I [bike] more for those people who have gotten hit by cars and for all of the animals that get run over by cars every day and are just passed off as being in the way of progress. Most of the reason people come to these rides is because they’re frustrated with not being treated equally. It’s a threatening situation to be riding alongside a really busy road and there are cars whizzing by constantly.”

Santa Rosa city traffic engineer Gene Benton agrees. “It’s not always fun to go against somebody in a large vehicle. My staff is heavily into bicycles,” he says. “Probably over half my staff commutes on bicycles.” What Benton terms a “very controversial” traffic project to replace travel lanes for cars with bicycle lanes on Yulupa and Bethards avenues comes before the City Council at the end of April.

Benton also says the city adopted a Master Bicycle Plan two years ago and that all road construction projects such as the Fountaingrove Parkway, Marlow Road, and Guerneville Road include bike paths. According to Benton, the city has 43 miles of bike paths; about 100 miles would be ideal.

At the end of ride, standing in front of Wolf Coffee next to his experimental car seat­style two-wheeler, rider Orrin MacQuarrie likes the turnaround of vehicular fair play. “Usually one cyclist is surrounded by cars,” he says. “It’s cool to see cars surrounded by bicyclists.”

From the date-date, 1997 issue of the Sonoma County Independent