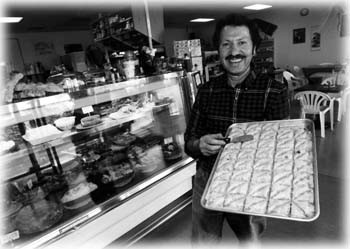 Just Dessert: The honey-drenched pleasure of baklava is a specialty item offered by Victor Dada at Jeny’s Deli.

ONE WEAK POINT of dining in Sonoma County is the scarcity of truly ethnic restaurants. Pizzas, burritos, and egg rolls may abound but they hardly qualify as international cuisine. Thankfully, a few good Thai and Indian restaurants have opened up over the past few years, but there are still gaps. Where do you go when you’re seeking a Moroccan feast or a platter of Middle Eastern appetizers? The answer usually is: San Francisco.

The mom and pop here are Jeny and Victor Dada, immigrants from Romania and Palestine respectively, who have brought with them a wonderful collection of family recipes. They are both “hands-on” chefs–Jeny in the prep kitchen creating the house specialties, Victor working behind the counter preparing customer orders.

The thing about uncovering buried treasure is that you often have to look past the shell to find the gem hiding inside. At first glance, Jeny’s is just another everyday deli. The menu board offers the usual selection of turkey, ham, and roast beef sandwiches, as well as burgers and omelets. The candy rack and soda refrigerators are stocked with all-American standards; there’s even chewing tobacco.

But look closer. Grape leaves and cabbage rolls stuffed with rice and onions share space in the deli case with a heaping platter of tabouli brimming with cracked wheat, parsley, and tomatoes. Behind the counter pressed lamb spins on its grill, waiting to be sliced for gyro sandwiches, and the lilt of Arabic music plays in the background.

Mediterranean and Middle Eastern foodstuffs like pita bread, rose water, halvah, tahini, curry powders, sumac, and other exotic spices line the grocery shelves. This is the place to shop the next time your recipe calls for mango gelatin dessert from Lebanon.

Because of the exotic variety, dining at Jeny’s Deli for the first time can be a bit intimidating. My recommendation for first-time visitors is to order the Combination Platter, a hefty sample of house specialties. Circling the rim of an oversized plate are tasting portions of warm dolmas (stuffed grape leaves), baba ghanouj (a smoky roast eggplant purée), falafel (deep-fried garbanzo patties that are made from scratch), hummus (a garbanzo dip flavored with lemon and garlic), refreshing tabouli salad, and pita bread that you can either use to scoop up the dips or employ as a pocket for the falafel and condiments.

Topping my list are the kebabs, especially the Doner (lamb) Kebab. A large pita pocket is filled with slices of spiced lamb, tahini salad, and a flavorful mix of chopped cucumber, tomato, and onion that makes the sandwich especially fresh-tasting. Beef kebabs are also recommended; the chicken kebabs, while tasty, would be greatly improved by slicing the chicken into smaller bites.

Clearly, Victor and Jeny are restaurateurs at heart. Recently introducing sit-down dinner service at their six small tables on Friday and Saturday nights, they have a group of eight belly dancers to perform twice on these evenings.

Why did Victor open the market-deli? “I first asked myself, ‘What does Santa Rosa want?'” he replies (and as a Santa Rosa restaurateur for the past 24 years, it is a question I often ask myself!). “I could see that people were going to San Francisco for Middle Eastern foods,” he says simply, “so we started Jeny’s.”

It’s a market; it’s a deli; it’s a welcome purveyor of true ethnic food. Now if someone would only open a Moroccan restaurant…

Michael Hirschberg is owner and operator of Mistral Restaurant in Santa Rosa.
From the April 10-16, 1997 issue of the Sonoma County Independent