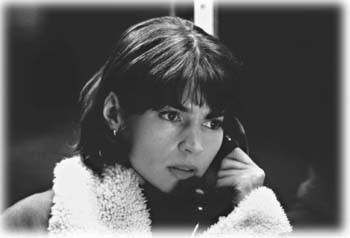 Call of the Wild: Julia Ormond gives the cold shoulder to humanity.

Writer David Templeton takes interesting people to interesting movies in his ongoing quest for the ultimate post-film conversation. This time out, his guests are authors Steven Voien and Lydia Bird and the subject is solitude, as portrayed in the film Smilla’s Sense of Snow.

THE CAFE is crammed with weekend wanderers, collectively making merry cacophony while the espresso machine hisses out a noisy new latte every few minutes. Our foursome, bumped and jostled numerous times as we work our way to our table, takes refuge in the backmost corner of the place. Having just come from Smilla’s Sense of Snow–a film full of long potent silences and lingering shots of vast, unpeopled ice fields in Greenland–we find all this exuberant humanity around us a bit jarring and strange.

“Smilla was a very prickly, hostile, suspicious person!” shouts writer Steven Voien, referring to the film’s title character–an icy and reclusive, math-obsessed glaciologist investigating a murder, who is played with a tangible sadness by Julia Ormond. “Scientists–as a bunch, because they have to be loners–tend to be prickly people, wouldn’t you agree?” This question is directed at my brilliant and insightful scientist wife, Susan.

“Well, I’m a geologist,” she replies, leaning in to make herself heard. “We’re always happy to have company. One benefit of never having to sneak up quietly on a rock.”

“Anthropologists, I would imagine, would be fairly social scientists as well,” suggests author Lydia Bird, as the din around us settles. “They’re out on digs together, that sort of thing. Personally, that would get to me. I’m much more of a loner than Steven is. “

Voien and Bird (who are married), have lived in Africa, India, and Bulgaria, a result of Voien’s former position as a Foreign Service diplomat. Voien’s intelligent new novel Black Leopard (Knopf, 1997)–a sequel to his A High and Lonely Place–is set in the streets and forests of West Africa and features protagonist David Trowbridge, a globe-trotting, solace-craving, leopard-loving biologist.

Bird’s Sonnet: One Woman’s Voyage from Maryland to Greece (Farrar Straus Geroux/Northpoint Books, 1997) will be released in May. The sonnet of the title is the name of Bird’s boat, a craft that took on its own personality during the months-long solo adventure in which she rekindled her own love affair with solitude.

“What’s interesting about Smilla,” Voien continues, “is how she’s brought out of herself by the events she’s thrown into. From a writer’s point of view, loners are kind of sterile characters–unless you open them up.”

“What about nuns and monks?” I ask, wondering if the cloistered experience is perceived as sterile by those committed to it.

“That life is impossible to imagine to me,” Voien shrugs. “I suppose if you had a rich spiritual life, you could do it.”

“I think that may be part of what creates a loner,” suggests Bird. “They have enough within themselves so that they’re not seeking sustenance from outside. But in the case of the cloistered nun, that’s someone who decides to take herself, permanently, out of life. With a solo sailor or someone who wants to walk alone to the North Pole, it’s different. It’s taking yourself away from the world for a while to get perspective on it–but you are planning to come back. I can’t wait, sometimes, to get out on the ocean, to get into an environment that is simple, where I know every little part, like I know every element of my boat.”

“That’s exactly how Smilla is in regard to mathematics and to snow,” Susan adds. “Her understanding of them is comforting to her; they’re her constant.”

That sense of comfort can also, we agree, be derived from a connection with a place, as in Smilla’s relationship to her homeland of Greenland. We each name places that have put their hooks in us. For myself, it’s Mt. Tamalpais; for Susan, it’s Antarctica.

“Africa,” Voien states, “really got under my skin. I was sad to leave it. It broke my heart. That’s one of the reasons I wrote my novel, to re-create Africa for myself.”

“In the middle of the ocean, with no land in sight,” says Bird. “that will put its hooks in you. Then there’s a voyage I’ll never forget, to Glacier Bay in Alaska. To have these unbelievable calving glaciers made of unfathomably blue ice. That was an extraordinary experience.”

“Sleeping on a glacier in Central Asia,” remembers Voien with a laugh, “we’d pitch our tent on ice, lay down the rice pad, and climb into the sleeping bag, thinking it was warm enough. Two hours later we’d wake up and realize that we were sleeping on an ice cube! The cold seeps up from the glacier. Talk about putting its hooks into you. Those particular hooks went right into my bones!”

From the April 3-9, 1997 issue of the Sonoma County Independent