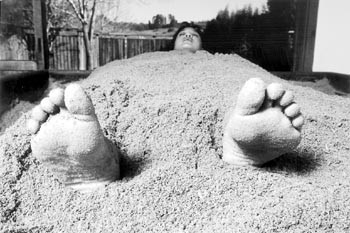 Wood, I could: Packed in hot wood chips and enzymes, Lisa Santos discovers that bark is better than bytes. After a week at the computer, Santos relaxes at the Osmosis spa, in Freestone, picked by you as the best local getaway.

‘Best of’ local recreation–
playing hard couldn’t be any simpler

SIX A.M.: Get groggily out of bed, pull on filthy comfortable clothes, and begin a walking slog that encompasses three miles of pastures, rolling country lanes, flower gardens, at least one dead skunk, a poultry farm, two baby black goats pulling on their mothers, and the delicate pink of the eastern sky. Ten-thirty a.m.: Drive the Stony Point backroad through Sebastopol, past junk sculpture, the brotheled elegance of the Washoe House, past orchards, and into Forestville, turning toward the river. Stop at Speer’s Market for treats and cheeses and wine. Noon: Arrive at Armstrong Woods. It’s Mother’s Day and hot and packed as hell and dust rises from the car lot as from a cloak in Miss Havisham’s closet and settles over the hundreds of hikers and picnickers enjoying the shafting light that tricks its way through the tall redwoods. Find a table, spread out the food, and sip expensive-tasting inexpensive local wine from paper cups. The women in the large Hispanic family gathered around three tables nearby set out food and talk while the men play guitars and sing. One-thirty p.m.: Hike upward slowly, point out mushrooms and butterflies. Two p.m.: Go to the Russian River, strip down to a suit, and swim once the shriek of the cold wears off. Lie on the warm stones and dry. Four p.m.: Drive home through more woods, pastures, and fields. Midnight: Before sleep, consider the lovely simplicity of such a day spent in such a place.

Best Slice of Heaven on the Cheap

You got your heat. You got your beer. You got your dogs. You got your ball. You got yourself a little slice of heaven on the cheap, right there under the summer sun at the Rohnert Park Stadium–home of the Sonoma County Crushers. Fans who felt slighted by the baseball strike a few years back know that the spirit of the game is alive and well at this hum-baby haven. On the field, the play is fast-paced and exciting. Kids love it. Grownups love it. And the Crushers–one of eight professional teams in the Western Baseball League, stretching from Mission Viejo, Calif., to Grace Harbor, Wash.–are coming off their best year yet. The team, now in its fourth season, finished in first place in 1997 under the gentle guidance of manager Dick Dietz, one of the best catchers the San Francisco Giants ever had. And there’s lots of local flavor gracing this relaxed outdoor experience. Of course, the outfield also hosts the campy 20-foot-tall Korbel champagne bottle that pops its cork every time a Crusher bangs a home run. No wonder the late, great newspaperman Herb Caen likened the stadium to “shades of Bull Durham.” The Sonoma County Crushers open at home May 29 at 7 p.m. with fireworks and the whole bit. Rohnert Park Stadium, 5900 Labath Ave. (two blocks west of the Rohnert Park Expressway; just look for the 100-foot-tall light towers). Tickets are $3-$10. For ticket info and game schedules, call 588-8300.
G.C.

Getting away from it all needn’t mean a long trip. Beyond the physical barrier of Highway 1’s hairpin switchbacks north of Jenner, the near north coast seems a world apart. And where better to savor it than the Fort Ross Lodge, an unpretentious hostelry perched on the headlands two miles north of its historic namesake. Each of the 24 rooms comes with its own mini-fridge, VCR, microwave, and barbecue kettle (charcoal included). Many have individual hot tubs (a central Jacuzzi and sauna is open to all guests), but none have phones. Pack groceries (or stock up at the small store across the road), walking shoes, a good book, a favorite movie, or other diversions, and settle in. Who knew nirvana was so close at hand? Fort Ross Lodge, 20705 Hwy. 1, Jenner; 847-3333.
B.R.

Best Way to Turn Your Crank

Serious bicyclists barely hesitate when asked to choose the best local bike ride. Pedal from your front door past Monte Rio (getting there will be half the fun), take Austin Creek to Cazadero, roll down King’s Ridge Road to Hauser Bridge, pound up Seaview Road and fly along Meyers Grade to Highway 1 north of Jenner. Return through Duncans Mills. The 95-mile loop offers panoramic views, 50-mph descents, and long, sustained climbs. “You are rewarded for every foot of elevation with super descents and vistas,” philosophizes one experienced cyclist, who compares the bright-blue ocean vistas and verdant landscapes to northeastern France. This tremendous ride requires respectable fitness and the psychological ability to share narrow roads with speeding cars.
D.B.

Looking for a pleasant way to fritter away an afternoon? Try the Gravenstein Apple Fair, the sweetest little harvest festival around. It’s fresh air and newfound friends. Cabaret denizen Tom Waits strolling under the oaks with his family. Exotic birds and swampy Cajun music best experienced while teetering atop a bale of fresh hay. Honey sticks and apiary exhibits. A sinewy blacksmith (once a college professor) demonstrating his gritty craft amid a cloud of soot. The mesmerizing whir of vintage farm machinery–who would have thought an oily 10-horsepower water pump could be so much fun? And, of course, the hottest apple fritters and coldest homemade vanilla ice cream this side of your fondest dreams. The Gravenstein Apple Fair is held in mid-August at Ragle Ranch Park in Sebastopol. Admission is $1-$5; children under 5 are free. 571-8288.
G.C.

Best Use of Warehouse Space

Like the oversized practice garage for some punk-rock band, the indoor-soccer complex called Sports City blends into the urban landscape as a nondescript, windowless, steel building the size of an airplane hanger. But inside the plain Piner Road warehouse, there’s no surly band of angst-ridden musicians, just a powwow of soccer tribes. On Sunday morning, literally hundreds of soccer players in bright colors run their asses off in a fast-paced, wall-banging version of the world’s most popular game, complete with penalty boxes for rough play. Sports City attracts dozens of soccer teams that book the joint solid. From the old, stiff, and decrepit to the young, swift, and powerful, men and women and boys and girls of all ages gather for an all-weather soccer fix at this veritable Church of the Spotted Ball. Sports City, 921 Piner Road, Santa Rosa; 526-1320.
D.B.

Best Place to Rise Above It All

Climb the rickety wooden steps of the two-tiered observation platform at the overlook above Lake Sonoma and drink in the panoramic views from on high. Who needs the Italian Riviera? From your vantage point, 1,000 feet above the elevation of the lake, you can see Dry Creek Valley, a patchwork of vineyards, and the Mayacamas range. If it’s clear, the small plumes of steam rising from The Geysers may be visible in the distance. The picture is serene. The spell of stillness and silence is broken only by the cry of a redtail hawk and the occasional whine of a jet ski skimming the waterway below. Eleven miles northwest of Healdsburg at 3333 Skaggs Spring Road; 433-9483.
P.H.

The main parking lot at Santa Rosa Junior College, adjacent to Santa Rosa High School, serves admirably as a late-night, after-hours Frisbee park. The lights are free, the course is creative, and the cars are gone. Select an oak tree or lamppost in the distance, call “par”–about three or four throws–and let the disc fly. You can’t hurt anything: not the oak tree, the parking lot island, or the ticket dispenser. Make up your own games. Or try this one: In the lot directly adjacent to the high school, stand on the west traffic island and golf around the east island before returning to hit the lamppost where you started. For this game, par four is good. Three is excellent. Hit par two, sign a professional contract, and come back in the daytime. The campus cops don’t seem to mind. But don’t break the law, just focus on fun and enjoy their patience–and their protection. Santa Rosa Junior College, 1501 Mendocino Ave.
D.B.

Best Reason to Twitch Your Hips

So you’ve always wanted to gyrate in a grass skirt, clatter castanets, or learn the intricacies of exotic Kathak dancing with bells on your ankles, no less. Look no further than the charmingly run-down Lincoln Arts Center in Santa Rosa. The International Dance Theater and School holds weekly Hawaiian hula, Spanish flamenco, and Indian Kathak classes for adults and children. Beginners and beyond are all welcome; even dancers of the two-left-feet variety will discover reasons to pound and twirl. In such a friendly, supportive environment, can it be such a big (and exceptionally well-choreographed leap) from studio to stardom? International Dance Theater and School, 709 Davis St., Santa Rosa; 544-0909.
P.H.

Best Place to Scratch the Sky

An easily missed road winds steeply out the back of Armstrong Woods State Reserve and catapults the unsuspecting adventurer to an expansive forest view that is free of human artifacts. It’s an eyeful of wooded mountains. Rolling hills and coastal bluffs make a person feel remarkably alive and blessed to live in Sonoma County. It’s a perspective that’s difficult to find, a succinct answer to that nebulous, questioning, hemmed-in feeling that so often haunts life. Take Armstrong Woods Road from downtown Guerneville. Don’t leave this one just for tourists.
D.B.

Sure, the official explanation sounds plausible. I mean, it’s possible that wind and water and small bits of rock and seashells could have combined to transform the red-orange sandstone cliffs along the coast at the county’s northernmost state park into a decidedly alien sort of exterior decor. Ribbed and pocked with rounded holes and depressions, the gritty rock walls are quite unlike any other geologic feature within hundreds of miles. So what do you think the strange formations really mean? The truth is out there. Salt Point State Park, 25050 Hwy. 1, Jenner; 847-3221.
B.R.

Where once there were merely dozens, now perhaps hundreds of river otters are making the Russian River and its watershed their home. Reportedly, these shy, frisky mammals have built nests on Cassini Ranch near Duncans Mills, and several otter families have been spotted near Jenner–hey, otters just wanna have fun. The aquatic whiskered members of the weasel family are known to build muddy slides on riverbanks, where they spend hours sliding and splashing. Though not endangered, river otters are considered a “species of concern.” And several recent unconfirmed sightings of their endangered seafaring cousins, sea otters–which were wiped out locally more than 150 years ago by opportunistic Russian pelt hunters–have raised hopes that leisurely otter watching will be all the more fun this summer.
S.P.

From the March 26-April 1, 1998 issue of the Sonoma County Independent.

Cool to Be Kind