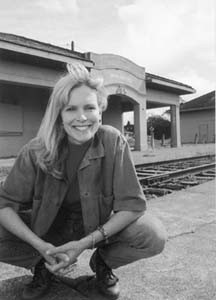 TO REACH Elizabeth Candelario, it is necessary to clamber up an old redwood beam, balance on an ancient railroad tie, and make a final scramble onto the none-too-clean floor of the building in which she is standing. Candelario, the executive director of the Healdsburg Arts Council and the spry mother of two young children, has easily leaped from beams into this abandoned railroad depot. The reporter, woozy with flu, has less luck. So do the bats that have fallen from the rafters when the sliding doors were opened and are now flailing on the depot’s filthy floorboards.

But in less than one month, this old building in Healdsburg will present quite a different visage. The depot, which has been unused for some 20 years, will be yanked up, the rotten redwood foundation replaced, ramps erected, exit signs installed, and a train once again make this more than 100-year-old structure a stop. However, this won’t be one of the lumber, freight, or refrigerator cars that twice daily passes through Healdsburg. The cargo in this three-car train is far more precious, containing works by Alexander Calder, Willem de Kooning, Larry Rivers, Georgia O’Keeffe, Wayne Thiebaud, and other noted artists of the 20th century.

Known as Artrain, this chug-a-lug has been traversing the country since 1971 under the auspices of the Smithsonian Institution, bringing museum-quality art to areas that are situated far from museum-quality museums. Having hosted 13 exhibitions in its cars since its inception, Artrain currently carries an “Art in Celebration!” exhibit of work that represents American life since 1972.

Artrain literature boasts that the arrival of this iron horse often causes communities to form arts councils, plan celebrations, and steep their children in artistic techniques and history. Artrain literature must have been talking about Healdsburg.

Although this town’s arts council has been extant for several years, the arrival of the Artrain (at the bequest of council founder Jane St. Claire, who read about it in Smithsonian magazine and with her usual energy convinced Artrain schedulers to plan their entire western itinerary around Healdsburg) has spurred the council to develop its own center for exhibitions and classes. Once it can shoo away the bats.

“I think that the most important part of this whole project is that the community gets to recapture a historically significant building,” says Candelario, squatting next to the last existing depot bench. “The fact that this is in disrepair has an impact on the neighborhood. And it’s a wonderful metaphor, because it literally straddles the tracks. I sit here and watch the kids coming home from high school, and all of the Mexican kids are walking and all of the white kids are driving by in their cars. This is the spot where we hope to put them in the same room.”

Set to arrive on Wednesday, April 29, Artrain will be open to the public Saturday and Sunday, May 2-3, after two days of school programming. In fact, each and every schoolchild from kindergarten to sixth grade–home- and private-schooled included–has had a chance to benefit from an artist-in-the-classroom experience to prepare for the train’s arrival.

Planned as the keystone event in a weekend that celebrates the fifth annual Art on the Move visual exhibition (Sunday, May 3), Artrain’s arrival signals the beginning of a new era for the north county. Healdsburg’s efforts to recapture the train depot will result in a permanent cultural center and train museum, and the event has literally galvanized community effort.

“There are 23 committees,” explains Candelario, whose wine consultancy business is on hold while she feverishly prepares for the depot’s reopening. “Over 200 people in the community are involved in one way or another in this. When I was working with the artists for Artrain in the Schools, they kept reminding me, ‘Don’t focus on the product; focus on the process’–and that to me is the beauty of this whole thing. The process of the community coming together. Not just for this one week, but for the cultural center.”

And just exactly when does Candelario–who is helping to coordinate the release of Welcome Iron Steed, a historical book on trains in Healdsburg by author John van der Zee, and has planned for an international dance, a bluegrass band, a youth cafe, an opening ceremony, the artists in the school program, and the overhaul of the building–plan to sleep?

“After it’s over,” she grins, hugging her knees. “It’s just so much fun. I don’t need to sleep right now, this revs me up so much.”

IN HONOR OF ARTRAIN’S arrival, and in conjunction with the Art on the Move exhibit, Healdsburg is going culture-crazy. Here’s what you can do about it:

Tuesday, April 28: The Train, a film about the efforts of the French Resistance to export works of art out of the country by rail, is shown at the Raven Theater, 115 North St. Tickets to any other priced event give free admission to this $2.50 showing.

Friday, May 1: Youth Cafe at Harmon Street Depot. Multimedia cafe for teens to discuss and plan how the center can be viable and exciting to them. 7 to 11 p.m. Free. String Creek Band performs at Bear Republic Brewing Co., 345 Healdsburg Ave. 8 p.m. Free. 433-2337.

Sunday, May 3: Art on the Move exhibit of visual arts in four separate locations. Shuttle service, food, wine, and beer. Noon to 5 p.m. $10.

The Harmon Street Depot is on Harmon near the Memorial Bridge. For ticket information or details on any event, call 707-433-3064.