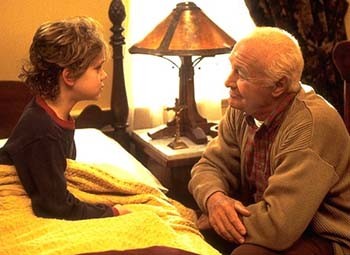 In his ongoing quest for the ultimate post-film conversation, David Templeton invites best-selling author and after-death counselor Sukie Miller, Ph.D., to see the new movie Wide Awake, in which a young boy mourns the passing of his beloved grandfather and seeks the answers to a couple of basic questions.

“I want you to see the duck,” Sukie Miller asserts, when I arrive at her hillside home to escort her to the movies. “I think it will tie in well with the theme of the film.” She leads me along the driveway to an adjoining house and a sliding-glass door. There on the gravel is a duck, bright white and disheveled, standing close to the glass, staring forlornly at his own reflection.

“His mate was killed yesterday,” Miller explains, her face displaying a compassionate understanding of the web-footed mourner’s grief. “He won’t stop looking for her. Every time he sees his reflection, he goes up to see if it’s her. It’s so sad, it’s breaking my heart.”

As we drive away a few minutes later, I glance in my rear view mirror.

“Is he still there?” Miller asks.

“He’s still there,” I reply as he tentatively presses his bill against his reflection.

She’s right. It kind of breaks your heart.

It’s a subject Miller is more than acquainted with. An expert on the multicultural beliefs surrounding the mystery of death and whatever lies beyond it, Miller is a psychotherapist who regularly counsels people searching for assurances about loved ones they’ve recently lost. Once the director of education at Big Sur’s legendary Esalen Institute, she is now the founder and director of the Institute for the Study of the Afterdeath, and is the author, with recently deceased Sonoma County writer Suzanne Lipsett, of the best-selling After Death: Mapping the Journey (Simon & Schuster, 1997). An admitted agnostic, Miller will not say what she believes might wait for us after we shuffle off our mortal long johns; it is the possibilities that interest her.

Wide Awake–the film we are about to see–follows the endearing spiritual search of a 10-year-old boy (Joseph Cross) whose grandfather has recently died. Wanting to know where the devoutly religious old man (Robert Loggia) has gone–and whether or not he is all right–the boy begins an earnest interrogation of his parents, his friends, and all the priests and nuns (including Rosie O’Donnell as a well-meaning science teacher) at his parochial school. Ultimately, after attempting to master all the great religions of the world, he finds his answer, though it’s not the answer that anyone, the filmgoing audience included, is expecting.

“God! I’m a wreck!” Miller exclaims, as the credits roll. Smudging tears from her eyes, she adds, “I’ve tried to stay away from sad movies ever since seeing The Bear.” In that 1989 film, a baby bear watches as his mother is buried in an avalanche. “I was a wreck then, too,” she adds.

A few minutes later, hands wrapped around a warm cup of coffee, Miller has more or less composed herself.

“If I could, I would have this movie shown in every third-grade classroom in the country,” she says. “I’ve actually proposed a curriculum, for the third-grade level, that deals with death and various cultural notions of where people go when they die.

“Every classroom has a gerbil in it, right?” she continues. “Or a hamster or a turtle or a fish or something. And every year one of these classroom pets dies. It’s the perfect time to explore the mystery of death with kids, because sooner or later they’re going to have to deal with it when a family member, a grandparent possibly, passes away. Kids deserve to have their questions answered.”

“And those questions are … ” I wonder.

“The same questions as in the movie,” she replies. “He wanted to know, ‘Where is my Grandpa?’ And then he wanted to know, ‘Is he OK?’ Those are the basic questions. They are the first questions I am ever asked when I work with a new client, and when it’s the parents of a child who’s just died, these questions are very important.

“Of course, I can’t answer those questions. I’m not a psychic. But I can help them incorporate their own beliefs of the afterdeath until they are able to answer the question for themselves.”

“Some film critics have said that this kid is too sophisticated to be a believable 10-year-old,” I mention.

“Not true,” she insists. “First of all, there’s nothing sophisticated about the questions he asks. And kids are smart. They don’t like it when someone is giving them an unsatisfying answer, and they will keep asking more and more complex questions until someone tells them something that makes sense.” She pauses.

“I loved that scene in the toy store,” she goes on. “Surrounded by all those toys. ‘They used to seem magic to me,’ he says. ‘But now they just seem like pieces of plastic.’ With nothing to believe in, his world had lost its magic.

“That’s what it’s all about, really. Its believing in magic. Magic is a child’s word for what we adults might call … what would we call it? It’s the mystical. That which cannot be explained by science or by physics, but which might actually exist anyway. And for the boy in the movie, that magic was gone.” With a slowly building smile that turns into a giggle, she adds.

“But he gets the magic back in the end, doesn’t he? That’s my kind of people.”