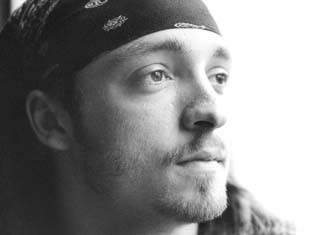 Rastafarian reggae is triumphant, the heartbeat call to consciousness. It is a call that can be as deep and spooky as a bad dream: as loopy and leering as Redd Foxx after hours; ethereal and eternal. As understated as a pause and as robust as a rocket. This is the music of the movement of Jah people, future folk who know God is a living man and that paradise is right here right now. It is Jah love made manifest. –Reggae scholar Roger Steffens

WHAT’S MORE NATURAL than sons carrying forward the work of a father?” says Rason Jahmal, the new leader of Sonoma County’s flagship reggae band Strictly Roots. “The music is a living entity, it must move forward.” Jahmal’s confidence is a necessity in the face of the tragic Jan. 25 death of his father, Ras Jahson, the founder and lead vocalist of the Roots, whose heart failure after a show in San Francisco left the group and its fans in an understandable quandary.

“He just fell asleep on me,” shrugs the 21-year old Jahmal somberly. “It was a very peaceful, heavy thing. After this really good show, he just passed away.”

Before becoming a fixture on the West Coast reggae scene, in the early ’70s Jahson was a New York City drug counselor, who, intending to stay only two weeks on vacation to Jamaica, fell in love with the island’s most representative feature, its music, and ended up staying for three years.

“He was heavily into jazz in New York, [he was] not a musician really, but a vocalist, you know; he scatted around a little. But reggae became the love of his life,” explains Jahmal. “He truly felt it was his duty to expand it to America. He invested all his money into records and dub-plates and came here. Actually,” his son laughs, “he was escorted right to the plane because of faulty papers.”

Upon returning stateside, Jahson, whose Christian name is long lost in that great tradition of exchanging a tired life for a more native persona, formed the first incarnation of Strictly Roots. “He just started a band with the eight or nine people he was living with at the time in New Mexico. They all played terribly,” says Jahmal, rolling his eyes. “The drummer had never played at all and none of them had ever been to Jamaica.”

Arriving in Sonoma County in 1986, Jahson and Strictly Roots honed their chops locally and on the festival circuit, adding considerably to the perception that Northern California is perhaps the most fertile region in the country for launching the careers of reggae acts, Big Mountain and Inka Inka being the most recent and noticeable phenomena.

“Santa Rosa is where it all came together for us,” says Jahmal, whose brother Don Juan, 19, plays keyboards for the band. “We’ve been lucky to find an audience that accepts a message band that is spiritual.”

Jahson’s penultimate performance was at the 1998 California Music Awards–formerly the Bammies–where this white, dredlocked performer and his Roots were named Outstanding World Beat Band of the Year. This statewide recognition, together with past shows alongside such reggae luminaries as Burning Spear, Steel Pulse, and the cool ruler himself–Gregory Isaacs–has led to a recent record deal with Neil Schon’s Piranha Lounge label out of Oakland.

“We were playing one night in San Rafael and this cat comes up with a guitar and asks if he can sit in,” recounts Jahmal. “He said his name was Neil Schon of Journey, and at the time I was thinking, ‘Who? Who’s Journey?’ Somebody must’ve recognized him and he ended up playing two one-hour sets and told us to give him a call.”

The resulting disc, Jah Children Rising, is set for an early May release.

MUSICALLY, the post-Jahson Roots shows have featured the same deep rhythms and tight musicianship as before. The music bounces along wonderfully, and the audience is aware that they are in the hands of professionals. However, with Jahmal stepping from behind the drum kit to take the helm, the band now offers a slightly different vocal approach.

“I’ve been in front of a mike since I was 13,” he explains, “so I can remember people being blown away when Pops would let me get out there. Here’s this young, white kid out there freestyling. My style has always been more DJ [Jamaican rap].”

A DJ, or “toaster,” half-sings, half-chats over the top of a driving, usually improvised groove. This is an exciting prospect for reggae lovers who recall the likes of Big Youth and Brigadier Jerry expanding this exact setup into ingenious wordplay.

When asked why he has yet to address his father’s death on stage, even in the benefit shows in Jahson’s name, Jahmal answers slowly. “That’s my most vulnerable emotional time,” he says. “It’s very hard for me. Guys say, ‘Do this one to your Dad,’ but, man, I’ll be sobbing through the whole show. I do know that the emotion we feel has taken the music higher than it has ever been before and I know it will continue to.”