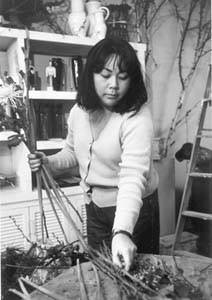 Flower arranging from the inside out

IS THIS JUST some of whatever you saw?” Caroline Rousset asks incredulously. Rousset appears less than pleased with the array of flora I have laid on her worktable. We have met in her downtown Santa Rosa floral studio, where I am to get insights into the art of flower arranging by observing her process as she composes beauty from the decidedly eclectic raw materials I have provided.

Thus will we collaborate in calling attention to “Art in Bloom,” the Sonoma County Museum’s annual celebration of the floral arts, slated for April 2-5.

Beginning close to home, I have gathered several branches of deep pink flowering quince, a cluster of mustard, a plume of pampas grass, a long-needled pine bough, three dry and prickly thistle stalks, and a single smallish peacock feather. Then with a stop at a wholesale flower dealer, a bunch of magenta gladiolas, another of frilly, pale yellow Fuji mums, and a cluster of something lavender (which turns out to be dyed Scotch broom).

Rousset, a native Frenchwoman who has lived in California for the past 13 years, is not much impressed with my collection. “It’s not working well together,” she says, dismissively pushing aside the thistle, pine, pampas grass, and peacock feather. “You have to match things together. They have to complement each other; it has to have harmony.”

Looking at what remains, she declares that a little additional greenery is needed “to mellow out the colors,” and quickly clips a handful of tendrils from the jasmine and trumpet vines growing in large pots outside the shop doors.

“Men love stronger colors,” Rousset explains as she begins briskly stripping leaves and branches from the stalks of the various flowers. “Apparently men are a little more colorblind than women, so they always go with stronger colors.” Manfully, I swallow a snide comment about wimpy pastels, while recalling the scarlet carnations I set aside in favor of the decidedly feminine mums. This, after all, is opinion–not science.

It’s not readily apparent, but flower arranging is labor intensive, and Rousset’s fingers fly, busily stripping and clipping as she speaks. “When people come into the shop, they see everything is done. They don’t realize how much time we put in on that.”

HAVING LEARNED the florist trade while an art history student in Paris, Rousset is adept with European techniques, demonstrating for me a type of hand-held bouquet called a “freestyle Biedermeier”–freestyle because it will blend multiple colors and types of blossoms, as opposed to a formal version, which is uniform in color and flower type.

“The old-fashioned way, you use an oasis or a vase and you do stem-by-stem arrangement,” she elaborates, her French accent only partially softened by time. “With this, you prepare everything in your hand. When you are done, you have the whole shape in your hand, instead of in the vase. It’s much quicker.”

When all is ready, she picks up three of the long glads, intersperses several shorter mums between them, and within moments the bouquet is taking shape. “Start with the biggest,” she says as she works, “You always go with the line–we call it the king–and then we have the queen” (that would be the mums), “which is almost a focal point. And then you have the ‘little soldier,’ which is the filler.”

It appears that the basic poker principle applies to flower arranging, too: jacks or better to open. In this case, the purple-dyed Scotch broom ranks somewhere around a 7.

Having used the more traditional cut flowers for the core of the arrangement, Rousset adds the mustard and quince around the outside, finishing the bouquet with trailing wisps of jasmine and trumpet vine “just to soften up the lines a little bit.”

Quickly snipping off the ends of the stems to create an even base, she sets the completed arrangement down on the tabletop, where it stands without additional support as she evaluates her work. “It’s shaped. It’s designed. It has depth. It’s natural looking,” she concludes, apparently satisfied.

“You don’t have to use a vase,” she observes of the tightly bound cluster of stems that is nearly three inches in diameter. “You can also use a dish and stand it, Japanese style.”

The finished product should last seven to 10 days with proper care, and had I been a more conventional customer, it would have set me back $60 or more.

Discreetly retrieving the peacock feather for my young daughter, I carry the bold arrangement out proudly, disregarding the rest of my carefully gathered castoffs, some already wilting on the cold concrete floor.

At last, Rousset and I are both pleased.