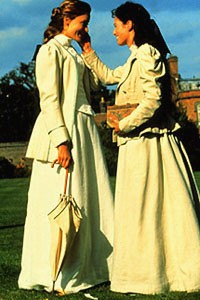 ‘Mrs. Dalloway’ comes as close to the novel as modernly possible

ON THE INSIDE of the box office window, pasted below the list of times and prices, is a small sign describing the various films that are playing at the theater this evening.

“Look at this,” I say to my guest J. J. Wilson, pointing to the short description of Mrs. Dalloway, the film we are here to see: “Romantic drama–based on the famous novel by Virginia Wolff.”

“How awful!” exclaims Wilson, noting the misspelling of Woolf’s name. “It’s shameful.” She turns to the ticket taker. “I don’t think you deserve any of our money,” she announces, flamboyantly piqued and half-serious.

Satisfied, we pay and make our way to our seats.

“How embarrassing for the theater,” Wilson smiles and whispers, her amazement having given way to obvious amusement, “to not know how to spell Virginia Woolf!” Indeed.

This, it so happens, is Wilson’s second viewing of Mrs. Dalloway, which stars Vanessa Redgrave as the eponymous upper-class heroine preparing to give a grand party, and Rupert Everett as Septimus, the tortured, suicidal World War I veteran whose path crosses that of the poised–but similarly distraught–Clarissa Dalloway. Wilson’s first peek at the film was a test screening held last summer at the annual gathering of the International Virginia Woolf Society–the organization of literary scholars and enthusiasts that Wilson helped found over 20 years ago, and for which she has served three terms as president.

Since 1973 she has edited and published The Virginia Woolf Miscellany, a tri-annual newsletter devoted to all things Woolf. Once convinced she was the only living aficionado of Virginia Woolf’s modernist, stream-of-consciousness writings, Wilson–who teaches literature at Sonoma State University–is now revered as a leading voice among 500 or so Woolf experts in 18 different countries around the world.

“I’m very interested to see if the flickers have changed anything since we saw it last summer,” she reveals as we wait for the movie to begin. “As I recall, there was much discussion the next day, and the general feeling was that the ending wasn’t quite right. Then again, modernist endings are always a problem for Hollywood, because they never end happily ever after. That particular script went out with the Victorian optimism.”

Throughout the film, Wilson glances occasionally around the darkened theater, attempting to read the reactions of the audience; afterwards, she quizzes me on my own responses to various plot points, coaxing and cajoling, explaining and expounding–ever the canny educator.

THEY DID ALTER a few things,” she says later, over coffee. “Primarily, they made the ending more hopeful, more dramatic.” She sighs, going on to explain that the film is based not only on the novel, but also on several of Woolf’s early short stories.

“The first short story was called ‘Mrs. Dalloway and the Prime Minister,'” Wilson explains. “It’s all about her party–and it seems, from other evidence, that Virginia Woolf was going to have Mrs. Dalloway commit suicide at the end of her party. In fact, Virginia had had a very bad breakdown herself–had heard the birds in the park speaking Greek to her.

“Does that ring a bell?” she tests me.

“Um, Septimus?” I reply. “He said he could hear the birds speaking Greek.”

“Very good. Of course, when Woolf was writing this, she had already tried to commit suicide,” Wilson continues. “She’d taken a hell of a lot of pills and came very close to doing it. And once previous to that, she’d thrown herself out of the window. It doesn’t seem to have been a very sincere attempt; it wasn’t a very high window. The next try–with the pills–was more serious. When she came to write this book, she had to invent Septimus to take on the suicidal nature she’d intended for Mrs. Dalloway. He was a shell-shocked soldier, with a sociological reason to commit suicide. Because, of course, there was no way of explaining at that time why a woman who had everything would ever think of throwing it away.

“She said in her diaries, ‘My brain feels like it’s burning in flames,’ when she finished the Septimus parts. Had she not invented that character, I’m sure the book would never have been written. It would have remained an embryo trapped in those few short stories.”

“Virginia Woolf, by the way, wrote several drafts of her suicide note, a writer to the end,” Wilson says. “[Her husband, publisher Leonard Woolf,] thought she’d tried to drown herself the day before she actually succeeded, because she’d come in wet from a walk. The next day she did go out walking again, put rocks in her pockets, and drowned herself in a miserable little irrigation ditch they called a river.

“But meanwhile, she’d done more work than most of us could do if we lived to be 100.

“I must tell you,” she continues, “that I don’t spend much time in my classes on Woolf’s suicide. For a while I never taught Mrs. Dalloway, because, aside from carping about it as a novel about the upper classes–and who gives a shit–they would think of it as a book about Woolf’s suicide, and would talk about nothing else.

“The amazing thing is how well the damn novels hold up after all these years,” Wilson concludes. “Aside from all the drama of her life, Virginia was one superb writer.”

Playfully scowling in the direction of the theater, she adds, “Yet some people can’t even spell her name. It’s just shocking!”