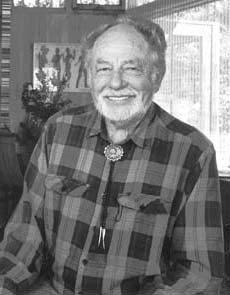 Dark City.‘ “I use water in cities as a living force, on some level like plants. It moves, it sparkles, it sounds good, you can touch it, you can play in it.”

LATE LAST NIGHT, exactly halfway through the film Dark City, world-famous architect and visionary Lawrence Halprin got up and walked out.

Many filmgoers and critics have found this odd science-fiction thriller –about a race of murderous, shape-shifting aliens who study human behavior within a vast, sunless city in which people’s memories are all artificial and where every street and building is magically, disconcertingly rearranged each night as the citizens sleep–to be a visually and mentally challenging experience. The whole thing left Halprin feeling impatient, irritated, and bored.

“To be perfectly honest with you,” he says strongly the next afternoon, “I thought it was a bunch of bullshit. I found it assaulting, and I didn’t know why I was being assaulted. I didn’t do anything wrong,” he adds with a laugh. “All I did was go to a movie!”

Perhaps it is not so surprising that Halprin would view such a vision of the future with displeasure; the alien city’s bleak, unyielding collisions of architecture and its oppressive, entirely natureless urban sprawl are the mirror opposite of the spacious, psychologically liberating environments that Halprin, who lives in Kentfield, has spent his professional life imagining, designing, and bringing into being.

Among his better-known accomplishments are the neighborhood-spanning Freeway Park in Seattle, the breathtaking Sea Ranch community in northern Sonoma County, and the one-and-a-half mile Israeli stretch of the Walter and Elise Haas Promenade in Jerusalem’s Old City. Most recently, Halprin saw 20 years of his work culminate in the opening of the Franklin Delano Roosevelt Memorial in Washington, D.C. A deliberately meandering, emotionally charged blending of granite walls, waterfalls, sculpture, and engraved quotations of FDR’s most thought-provoking ideas, the memorial alternates vast views of D.C.’s dense urban landscape with smaller, more intimate spaces that encourage meditative thought and heighten each visitor’s uniquely personal experience of the space.

Certainly, therefore, Halprin is no stranger to Dark City‘s notion that any environment can deeply affect and transform those who dwell in it; that human nature can be revealed by observing how people respond to their surroundings. In the warm, softly lit meeting room at his semi-bustling offices in San Francisco, Halprin takes a seat and considers this assertion.

“I wouldn’t be in this work if I didn’t think it would–well, I don’t know how much it transforms people–but it can go a long way toward making their lives more meaningful and enhancing their lives,” he remarks. “And if it’s done right, [architecture] can promote healing. A lot of healing can be done in a wonderful environment.”

“So if some outside entity or alien were observing people walking through the FDR Memorial,” I hypothetically suggest, “would they learn something vital about human behavior?”

“Of course,” he replies gently. “Otherwise there wouldn’t be anything wonderful about it. But I don’t know that standing aside would gain them anything. They’d have to walk through it alongside the people they’re observing. Then they’d learn a lot.

“Many people write to me about how it has brought back important memories about that period of time,” Halprin says. “People cry about their lost ones, they’re very emotive about how they feel, and about the lessons that Mr. Roosevelt’s era produced in them; how important it is for them to be able to interact with the sculptures, to touch them, to feel them, walk among them, stand by them; how important it was for them to hear their children read aloud the quotations carved into the walls.”

I ASSUME,” I SAY, “that one can predict how people will respond as a group to any given environment. Yet for every 100 people who walk through a place, aren’t there also 100 unique reactions to it?”

“Certainly, and that’s nothing but good,” Halprin replies. “I think that, on the whole, if you look at basic human values of people–love, affection, family, our reactions to nature, and so forth–you can assume that a lot of the responses are going to be almost biological. Emotional, certainly, but biological as well.

“Just as you can assume that birds are going to fly in a particular way, or that butterflies are going to flutter around and live for just two weeks, we have our own internal mechanisms that are predictable in a biological sense–the running of animals and the running of human beings, and our interest in the visual characteristics of what we like or don’t like about touching things. To some extent all of those things are predictable.”

“And what is more telling about us as humans,” I wonder, “those predictable ways we behave as a species, or the individual behaviors that are unique to each person?”

“I don’t differentiate,” he says. “They’re both equally important. Every shared reaction is also changed somewhat by each individual’s reaction. So I don’t force people to do any one thing in the environments I design. I let people flow and meander. I give them choices.

“I couldn’t possibly design anything that would make everybody equal,” he says. “Because people’s reactions are not equal. The way they react to things is different. And the way they exercise their potential seems to be different.

“And that’s actually quite a wonderful thing,” Halprin points out. “That’s one of the things that differentiates humans and animals, after all. Animals can’t go beyond their potential,” observes this architect of many marvels. “But we can.”