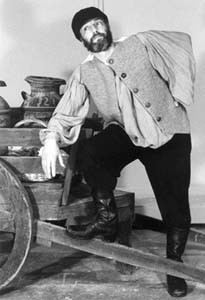 Fiddler on the Roof

Fiddler on the Roof.

SR Players’ ‘Fiddler’ is community theater at its best

OPTIMALLY, COMMUNITY theater should be like little-league baseball–everybody gets a chance at bat. In such companies, many actors, particularly young ones, are given their first glimpses of the bright side of the footlights, mentored by veterans and dilettantes alike. In keeping with this dictum, the Santa Rosa Players have crammed every willing actor (35 of them or so) into director Bob Rom’s ebullient production of Fiddler on the Roof, and in so doing are a model community theater.

Going on 40, Fiddler on the Roof (book by Joseph Stein, music by Jerry Bock, and lyrics by Sheldon Harnick) is one from a stable of diligent workhorses plodding the American musical theater landscape. Gleaned from the stories penned by a pseudonymous Yiddish writer during the first years of this century, Stein’s musical is the seriocomic tale of Tevye, a milkman, father of five–and, significantly, a Jew living in a pre-revolutionary Russia rife with anti-Semitism. Tevye and the members of his small village endure the ever-present threat of pogroms at the hands of czar-appointed local law enforcement, as well as the systematic decay of their traditions with the sequential marriages of Tevye’s three socially progressive and eldest daughters. Despite all this, Fiddler is a comedy, and director Rom draws many fine and diverting performances from his cast.

The spry Sonoma-based actor Eliot Fintushel is absorbing as the jocose and classic Tevye, his performance prudently nuanced with the crinkly-eyed whimsicality and wise-in-disguise schlemielness such characters often feature (stock personalities, as in Italian commedia dell’arte, also populate the shtetl). Indeed, Tevye is the ideal of a sitcom dad–he is stern but melts when his children kindle his paternal concern; think Father Knows Best for the turn-of-the-century Borscht Belt. Fintushel, however, supersedes Tevye’s known qualities and burnishes his interpretation with an intriguing vigor–his Tevye is a self-conscious entity, not a haughty cartoon. Indeed, Fintushel’s gestures approach puppetry (watch his hands during the musical’s ode to avarice, “If I Were a Rich Man”–it is as though they individually received skilled choreographer Nina Raggio’s attention). Fintushel also plays Tevye’s asides to God with a fervor that is at once humorous and stirring as he bemoans the collapse of his traditions.

Mika Gustafson, Denise Lane, and Alyssa Zainer (playing Tzeitel, Chava, and Hodel, respectively) each offer a confidently hewn performance as Tevye’s triad of marriage-minded daughters. Gustafson’s Tzeital is particularly convincing as she rallies against an arranged marriage so that she may wed her true love, Motel, played by a slightly green Jake Waldinger.

Local color is a commodity in excess at Tevye’s quaint village, including Evelyn McFadden’s hilariously well-meaning but meddling Yenta the Matchmaker and Katy Willens’ ghostly Grandma Tzeitel, a spirit who forewarns the perils of her namesake’s arranged marriage in a rousing dream sequence. Jeff Zainer is the title character, a fiddler that director Rom uses as a sort of mute–though musical–chorus. (Zainer synchronizes his violin pantomime to real violinist Siena S’Zell’s gifted playing–raising the question: Why not put S’Zell onstage as the fiddler?)

The Players’ Fiddler on the Roof is an economy-sized entertainment for the whole family. Although it’s not Broadway, it is Davis Street, and that’s certainly enough.