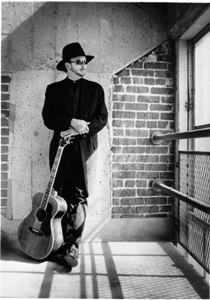 “The first time I heard Howlin’ Wolf was a life-altering experience,” says blues guitarist Roy Rogers, recalling his formative years as a guitarist in a Vallejo high school band. “It just blew my mind. I went to see him in 1966 at the Avalon Ballroom in San Francisco. It affected me profoundly. The power and the essence of the music struck me like a thunderbolt. I just said, ‘I want to do that!'”

Nearly 40 years later, Rogers is immersed in the blues and enjoying mounting success with his own career. Last spring, this longtime Novato resident picked up a nomination for a prestigious W. C. Handy Blues Award in the best instrumentalist (guitar) category. He recently recorded a soundtrack to Full Throttle II: Hell on Wheels, a motorcycle game created by Lucas Arts, the game division of Lucas Films. And this month saw the release of Face to Face, a 15-track collection of outtakes from the legendary John Lee Hooker’s Grammy-winning Virgin/Pointblank sessions, all originally produced by Rogers, who lined up such big-name collaborators as Bonnie Raitt, Carlos Santana, Robert Cray, and Los Lobos.

Rogers, along with Mike Kappus of the Rosebud Agency, is largely responsible for engineering the comeback of that veteran bluesman during the decade before Hooker’s death in 2001. “John was definitely unique,” says Rogers, who played guitar in Hooker’s Coast to Coast Band during the early- to mid-’80s before launching a solo career. “He definitely had the goods.”

The same can be said for Rogers, who performs solo on Saturday, Jan. 10, at Sweetwater Saloon, and with John Hammond, Sunday, Jan. 18 at the Raven Theater. In March Rogers’ formidable chops will be displayed on the debut broadcast of the Sierra Center Stage series, a new PBS program fashioned after the popular Austin City Limits show. The set was taped during two nights of live shows at the lush 350-seat Big Room theater at the Sierra Nevada Brewing Company in Chico. Guests will include Norton Buffalo, Shana Morrison, and fiddler Tom Rigney.

The show also will air on the BET network later this spring, and a live CD and DVD culled from the Center Stage sessions is scheduled for release around the same time.

Meanwhile, Rogers is hoping soon to syndicate his year-old blues radio show, Under the Influence, which he hosts Saturdays from 10am to 11am on KRSH 95.9-FM. “I feel that I have enough chops to take this nationwide,” he says. “And I’m having a ball with the show.”

As for the hoopla that surrounded the recent Year of the Blues celebrations, Rogers is optimistic that it will translate into heightened interest. “It’s a difficult time in the music business, but the roots thing always will come on strong, regardless of whether it’s high times or low times. The attention is all well-deserved,” he says. “People need to know that this is one of our major contributions to the world, period. This music is so powerful–everybody, everywhere loves the blues. Norton [Buffalo] and I went to China last year as part of a traveling festival. It was amazing how they responded to the music when we put ourselves out there.

“Clearly, people are still moved by the blues–it doesn’t matter if it was cut in 1942 or 1986 or yesterday. It is still music that means something. I feel very fortunate that I’m able to be a part of that.”

Guitarist and songwriter Keith Allen, a longtime contributor to the North Bay music scene who was known for his tasteful blues licks and snaking slide-guitar work, died on New Year’s Day from a heart attack at his Petaluma home. Allen, 50, radiated joy for music and conveyed that to all he met, professionals and students alike. He won respect from his peers and worked behind the scenes as a sought-after sideman, session player, and educator. In recent years, he recorded and performed with Mumbo Gumbo, the Haggerty brothers (Tim, Terry, and Aaron), and most recently, with guitarist Nina Gerber and singer Chris Webster of Mumbo Gumbo. He also was a road veteran of such acts as the Steve Miller Band, New Riders of the Purple Sage, Bonnie Raitt, and Norton Buffalo. He was unselfish in his generosity, contributing his talents to such organizations as Musicians Helping Musicians, a charity helping to defray medical costs of uninsured musicians. A memorial is scheduled for Sunday, Jan. 11, at 4pm. Congregation Ner Shalom, 85 La Plaza Ave., Cotati. 707.664.1213.