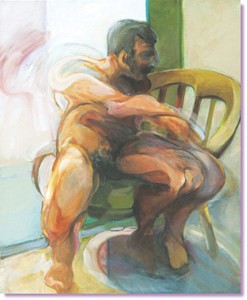 Still, Moving: Jerrold Ballaine works toward something entirely new for the 21st century.

To note that the late British painter Francis Bacon had an extremely recognizable style is to understate. His works were often wrought life-size, featuring round-limbed figures seated on rounded chairs, legs crossed akimbo, their faces swiftly obscured or blocked in with color to an eerie simian aspect. The circular face of Bacon’s wristwatch sometimes adds a prominent geometry to his smaller self-portraits. Images of his lover, the petty thief George Dyer, figure largely in his work.

Shadows that bear no relationship to the objects that created them pool against the logic of natural laws on the painter’s fictional floors. He brushed upon the back sides of his canvases, preferring the untreated tack of the linen there for the effect of its “tooth” with his characteristically thinned paint.

This art history lesson is prompted by a fast glance at the works represented in West County painter Jerrold Ballaine’s new catalogue, a companion to the one-person show titled “Figure Studies in the 21st Century,” opening Saturday, Jan. 17, at Quicksilver Mine Company.

Save lovers, the styles and subject of Ballaine’s work appear at first squint to be an exact catechism of the Bacon methods listed above. He even goes so far as to use thinned paint on the back sides of his linen canvases.

Contacted by phone at his studio, Ballaine corrects this interpretation of his influences. “Certainly Francis Bacon, but equal footing is given to [Richard] Diebenkorn. I studied under Diebenkorn at the San Francisco Art Institute, and I didn’t even learn about Bacon until 1980. I know that the paintings bear a reference to him, but they don’t bear a psychological reference, and that’s one thing that I’m very concerned about keeping out.”

Explaining an interest in the soft, pastel hues of Diebenkorn’s abstract palette, Ballaine stresses, “I don’t want to be storytelling, and one extreme is to look at Bacon as an illustrator, illustrating a circumstance or situation. Mine are more in the realm of classical painting, where it’s really a figure study rather than the figure as a part of tableau.”

That a well-regarded late-career artist who taught art at UC Berkeley for some 30 years would have happened upon Bacon’s work some two decades out of grad school is shocking; that he is doing just figurative work shouldn’t surprise collectors and critics at all. Long regarded as one of the finest landscape painters in the Bay Area, Ballaine is known for morphing genres, from the three-dimensional to photography and now to figurative work.

Professing to have grown “absolutely sick of looking at Sonoma County landscapes,” Ballaine admits that a lot of soul-searching goes into his genre shifts. What can be done that’s new when the shock of innovation has seemingly been exhausted?

Having apparently married the influences of two of the titans of 20th-century art in his canvases, Ballaine suggests that such a union, perhaps, is the best way of breaking through to the new. Diebenkorn, after all, owed a debt to Matisse; Bacon, to Velázquez and van Gogh. Assuring that the reproductions in his catalogue don’t do the paintings justice, Ballaine reflects simply, “Basically, my show is suggesting a contemporary way of looking at the human figure or looking at the figure as it exists today, in the environment in which it exists today.”

When faced with the real thing, one indeed anticipates seeing something contemporary that exists today.

Founded in 1985, the Sonoma County Museum assuredly got there first. Then came the Sonoma Museum of Visual Art, and finally, the Sonoma Valley Museum of Visual Art. And then, according to Gay Dawson, there was a mess. “We have become one conglomerate identity in people’s minds, so it’s time that we separate it out. It’s been very inconvenient for our patrons, who are confused.”

Dawson, the executive director of what was, until last month, known as SMOVA, decided to opt out. Revamping her venue anew as the Museum of Contemporary Art (MOCA) at the Luther Burbank Center, Dawson intends for her exhibition space to be the only one, San Francisco to Oregon, to concentrate solely on contemporary art.

And that’s where all the boring semantics come in, because such milk-fed words as “museum” and “contemporary” are actually bristling, spine-covered boils of contention when mentioned in conjunction with change.

Museums collect. They keep, warehouse, archive, and have large numbers of objects that reflect an era, an artist, a time, or an otherwise. How does Dawson avoid the menace of the dictionary in renaming her space the Museum of Contemporary Art?

“The field is redefining itself,” she says. “We have reached a time when these big storehouses of cultural pleasure are an old paradigm. How do you bring new ideas to new audiences? It’s all about borrowing, sharing, and traveling. Because our focus is on contemporary art, it makes us more fleet in bringing cutting-edge programs than if we’re concentrating on building a collection.”

Pulling together a prestigious nine-member body, MOCA has involved art institutions from San Jose to Grass Valley–including San Francisco’s Yerba Buena Center, the Di Rosa Preserve, and the Pacific Film Archive–in a new entity named the Northern California Contemporary Art Consortium. The group has hired a former editor of Artweek to produce a quarterly magazine exactly about the Bay Area art scene. The other North Bay institutions that share the word “Sonoma” are not represented.

OK, so what is the new meaning of that other mouth-thrasher, “contemporary”? “Well,” she says gamely, “one definition of ‘contemporary’ is that it is work by people who are still living. The other is that there was an era, usually thought to be 1968, with all of the forward movement that was happening at the moment, that began the contemporary [period]. Suddenly people were questioning the whole notion of museum, the object-on-a-pedestal.”

Which is naturally enough where Andy Warhol strolls in for his 15 minutes of posthumous fame. Using as its inspiration Warhol’s Factory digs–an old industrial loft in Manhattan that, with the help of thousands of silver cigarette liner papers covering the walls, he transformed into an urban glitter palace of hip–MOCA throws itself one hell of a coming out party on Saturday, Jan. 24. With a Factory lounge, live music, a birthday-party salon, and live video, the shindig will sprawl most of the LBC’s cavernous hallway interior. “This party,” Dawson says with a gush, “is going to be the biggest bash ever thrown at the LBC.”