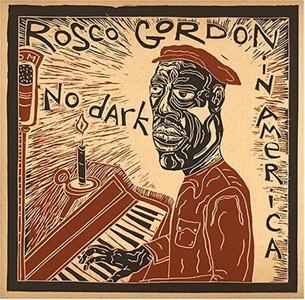 Rosco’s Rhythm: Rosco Gordon recorded much of his posthumously released new album on his own untuned piano.

When Rosco Gordon died three years ago at age 74, he left behind a suitcase full of sizzling session tapes that served as a fitting coda to a rollicking rock ‘n’ roll legacy. Best known for his seminal 1952 R&B hit “No More Doggin’,” Gordon–recognized for a trademark piano sound that Sun Records chief Sam Phillips branded “Rosco’s rhythm”–is widely acknowledged as one of the founding fathers of rock ‘n’ roll and a prime influence in the creation of Jamaican ska.

Those final sessions have finally seen the light of day with the release last week of No Dark in America (Dualtone), which ranges from the push-pull New Orleans groove of “A Night in Rio” to the string-laden piano ballad “Girl in My World” to the uplifting title track, an affecting post-9-11 rave-up.

The recordings–taped in Gordon’s Queens, N.Y., apartment with overdubs laid down in former Wilco drummer Ken Coomer’s basement, a friend’s living room, and various small studios–are sometimes rough, with false starts and stops and shaky vocals (“All right, put that one in the garbage,” Gordon declares at the end of a feisty taping of “Love on Top of Love”), but there is an immediacy and charm to this highly original artist that is undeniable and utterly irresistible.

Indeed, the album also is a testimony to the perseverance of two friends, Chris King and musician pal Eli “Lij” Shaw. Back in 1997, at the behest of roots-music critic Kevin Roe, the pair jammed their recording gear into a beat-up 1987 Cavalier and visited Gordon, finding an aged and ailing artist all but forgotten by the music world but artistically “on fire.” The two decided to create “field recordings,” capturing Gordon in his cramped Queens apartment singing and playing a badly neglected (and out of tune) piano. “Rosco literally sang himself sick for us,” King recalls in the CD liner notes, “clawing his guitar and banging his decrepit piano like a man possessed, then ending up in the hospital after we left.”

Back in Nashville, King and Lij began to build a band around the crude field recordings they had gathered in the apartment, eventually returning to New York to record Gordon on a better piano owned by Lij’s brother, the jazzman Nate Shaw.

Returning to Nashville with these new solo tapes, the friends discovered that word of the project had gotten out and among those itching to contribute was Coomer, who jumped at the chance to contribute overdubbed drums to the sessions.Gordon liked the results. Over time, a close friendship developed between the once-forgotten legend and the vagabond producers. Gordon even stood up as best man at King’s wedding, and the two whiled away many a lazy summer afternoon at Gordon’s apartment, watching Mets games and quaffing Budweisers.

Most of the sessions lay fallow for years, but the buzz rekindled Gordon’s career. In 2000, he signed a deal with the Stony Plain blues label, recording many of these same songs for the album Memphis, Tennessee, which picked up a coveted W. C. Handy Blues Award nomination as Comeback Album of the Year. Two years later, director Martin Scorsese featured on-screen interviews with Gordon in his ambitious multipart PBS documentary series The Blues, and included several classic Gordon tracks on the series’ bestselling soundtracks. Just weeks before his death in 2002 from heart failure, Gordon returned to the studio with King and Lij to record “Night in Rio” and the title track.

Three years later, No Dark in America possesses a purity of spirit that could only come from a labor of love, a thank-you card from two committed music fans to one of their heroes.

What could be more refreshing in this jaded age?

Talk about Southern flavor with a twist, the Bluerunners take their name from a Louisiana swamp fish, and the title of their fifth and latest album honors the sweet psychedelic shots that Neil Young used to ingest during the On the Beach recording sessions (a mix of low-grade pot and honey sautéed in a skillet). But you can bet the stinging slide-guitar solos that slice through these zydeco-inflected tunes play at least a small part in that title selection. Fueled by pumping Cajun rhythms, and the music and lyrics (many sung in French) of band member Mark Meaux, who hails from the Cajun heartland of Lafayette, La., the Bluerunners live up to their reputation as leaders of the region’s next generation of roots-music artists. Let the good times roll.