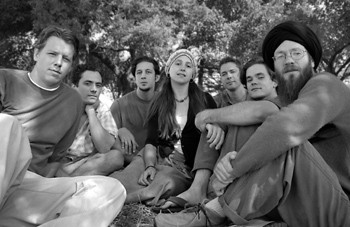 February Is the Coolest Month: Groundation honors Bob Marley in concert for the entire month.

Every February for the last six years, Groundation have taken time off from their own material and dedicated the month to Bob Marley’s music. “It’s grown from one show we did at the [now defunct] Inn of the Beginning, where the fire marshal had to come and shut it down because we were way over capacity, until we were touring the whole West Coast every year in February,” says Harrison Stafford, the band’s lithe and energetic singer. While this yearly ritual has helped the band build a name, it’s clear that their reputation stems from more than their respect for R. N. Marley.

With four albums of original material behind them–they’ve just finished a fall tour of Europe in support of their most recent, 2004’s November release We Free Again (Young Tree)–Groundation’s own music and remarkable momentum have carved them a place apart from other young reggae bands.

The members of Groundation met while studying jazz at Sonoma State University. After learning the roots of reggae music, they experimented with their knowledge of jazz and group improvisation. In both live and studio settings, Groundation play with the boundary between tight arrangements and impromptu reaction; it’s hard to tell sometimes which moments are planned. Lyrically, Stafford continues the tradition of his reggae ancestors, spreading a message of positivity and urgency. Delivering this message with an immediately recognizable throaty voice, he is the increasingly rare singer with his own unique voice.

Groundation return to their home turf when they play the Mystic Theatre on Feb. 19. With Groundation’s story having begun in the North Bay, much of their oldest and most hardcore fans live in the area. The Marley tribute shows each year are a favorite among fans, and also serve as a time of reflection for the band.

“It’s nice to take a month and play completely different material,” says keyboardist Marcus Urani. “We kind of reassess what we’ve been doing.”

“And it’s a time when we as musicians get to learn from the masters,” adds Stafford, “the ones who set it out–all aspects, from songwriting to lyrics and that whole phrasing to the individual musicians. It’s just a collective that we as a collective have learned so much from.”

When asked to paint a picture of the crowd one might find at the Mystic, Urani puts his arms in the air and mimes a bouncing crowd. “It’s just like this,” he laughs, “a room full of people goin’ for it.” Groundation draw the young folks out of an area where it’s easy for some twenty-somethings to feel like endangered species. But when Groundation play, a congregating point is formed, and a lot of collective steam is released.

For their own reasons, the band are glad to attract a youthful crowd. “We do get people from all walks,” Stafford says, “but there is a big draw for young people, which is good because the music is now. It’s the progression of us as individuals–we’re trying to evolve musically. It seems like the kind of young people who are on the cusp of a fire to really achieve things in life and better themselves come to the shows.”

Reggae is commonly thought of as mellow music. But in talking with Urani and Stafford, the word “fire” is mentioned repeatedly. Groundation find intensity even in their most gentle rhythm. Take this band’s reputation for high energy and combine it with their reverence for Marley and it will surely be a night to remember.

Groundation pay tribute to Bob Marley on Saturday, Feb. 19, at the Mystic Theatre.