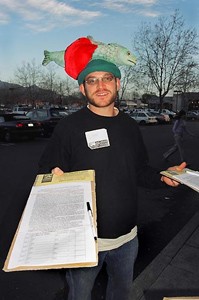 Tomato Fish Hat: A volunteer gathers signatures for the GE ban set to go on the ballot.

Let the campaign begin. Now that 38,000 signatures have been officially verified and the Sonoma County Board of Supervisors has agreed to set a date for the special election, the battle to ban genetically engineered (GE) crops in Sonoma County is on.

Last week, the Board of Supervisors postponed a decision on whether to immediately implement the measure or to place it on the ballot later this year until a study of the proposal is completed March 1. If the bill passes, Sonoma will become the third county in California to ban the planting of GE crops, following the lead of Mendocino and Marin. If the bill fails, Sonoma will be the fourth county in the state to reject such legislation.

GE-Free Sonoma, a grassroots campaign of over 500 volunteers, collected a record 45,000 signatures–20 percent of local voters–to put the initiative on the ballot. Later this year, residents will vote on the issue in a special election. By itself, the election would cost the county over $500,000, so it will likely piggyback with another special election, such as the one Gov. Schwarzenegger may call for November.

Supporters of the bill say that the time to act on this issue is now, before GE crops are regularly planted in Sonoma County and have a chance to contaminate the environment.

“Once those crops are planted here, there’s no turning back,” says Dave Henson, campaign director for GE-Free Sonoma. “And there is a long list of GE plants in the pipeline that may be released in the near future, like apples, strawberries, lettuce, tomatoes, squash, melons–the list goes on and on.”

But grapes, Sonoma County’s largest crop, are not on the list. Though scientists are developing a grapevine resistant to the dreaded Pierce’s disease, it will be at least a decade before it will be on the market.

However, GE corn is already being planted by local ranchers, according to the Sonoma County Farm Bureau. If the anti-GE bill passes, the ranchers will probably have to pull up the corn and find other means to feed their livestock.

“Banning GE crops would definitely have a large economic impact on farmers,” says Lex McCorvey, executive director for the Farm Bureau, which opposes the initiative. “There aren’t a lot of GE crops grown here right now, but there will be more in the future.”

Opponents of the bill say that banning GE crops could put farmers at a competitive disadvantage. In the last year, the planting of GE crops grew 20 percent worldwide. Much of that was in developing countries like India. Sonoma County farmers could be left out if they too don’t have the option of growing GE plants.

On the other hand, most of Europe has banned the import of GE food, so if the bill passes, Sonoma County will have guaranteed access to this large market. It would also ensure the quality of the local organic labels. Once GE crops are grown here, it will be difficult to tell if they cross-pollinate with organic plants.

GE-Free Sonoma has been working closely with the agriculture community to address these dicey issues. “We thought it was important to work with farmers and other groups on drafting it,” says Henson. “We wanted to avoid making this into an issue of environmentalist versus farmer.”

As a result, the bill contains some compromises. For example, it bans the planting of crops but does not preclude research or development of the technology, meaning that while someone couldn’t plant a field of GE grapevine here, they could still develop the plant.

Additionally, the Board of Supervisors can abolish the initiative with a unanimous vote if future developments make GE crops beneficial. And since the legislation expires in 10 years, it opens the door to the possibility of Pierce-resistant grapevines.

Supporters of the bill say the federal government has been lax on regulating this new technology, allowing it into the food system without sufficient long-term testing. In 2003 alone, there were 100 million acres of GE crops in the United States. The vast majority of that is corn, soybean, cotton and canola.

Much of the soy and corn eaten in the United States is genetically engineered, a fact that makes many people nervous. Most Americans support the labeling of GE foods. The Japanese have even said they will “watch the children of the U.S. for the next 10 years” before they allow the planting GE crops in their own country.

Concerns about GE food are numerous. Such foods may create health problems, such as new allergens or immune-system problems. They may create “super weeds” that are resistant to current pesticides, and force farmers to use even more hazardous chemicals in order to destroy them.

Genetically modified organisms may also breed with native species and take over the ecosystem. A study by Purdue University showed that GE salmon have such a breeding advantage over wild salmon that if 60 GE salmon are released into a population of 60,000 fish, the native population will be extinguished in just 40 generations.

Proponents of the technology say that not only are GE crops environmentally friendly, they are the solution to age-old agricultural problems.

“These products have provided tremendous benefits for farmers,” says Lisa Dry, spokesperson for BIO, the Biotechnology Industry Organization. “They are reducing the use of pesticide, preserving soil through less tillage and using fewer fossil fuels because the farmers are out in the fields much less.”

She adds that GE crops have the potential to end world hunger.

Environmentalists, however, say that GE crops may do the opposite by creating a monoculture where the food supply is too dependent on one particular type of plant. Monocultures are not new. In 1845, for example, a fungus destroyed Ireland’s few varieties of potato, wiping out the country’s major food supply and killing over a million people in what is today called the Irish potato famine.

With GE crops, the monoculture is patent-protected. Monsanto alone has patented over 11,000 seeds, meaning that no one can reproduce the plant without the company’s permission. Monsanto has been regularly filing–and winning–lawsuits against small farmers because, in most cases, its patented seeds drifted onto the farmer’s land and cross-pollinated with existing plants.

In addition, the new “terminator technology,” where seeds are designed to genetically switch off after one planting so that farmers can’t reproduce the seed, is also problematic for ending world hunger.

If the bill passes, Mendocino, Sonoma and Marin counties will create the largest GE-free zone in the United States. Marin has little agriculture compared to, say, its neighbor Napa, which has no movement to ban GE crops. However, the more counties that ban GE plants, the stronger the case for a larger statewide initiative. As it currently stands, there is little support among legislators for a bill banning the planting of GE crops in California.

“Those initiatives were worded poorly in part because the organizers didn’t talk to the farming community,” says Henson. “The consequence of that was a lot of ignorance and misinformation out there.”

In addition, the bills saw strong opposition from biotech and agricultural interests. Residents were treated to a barrage of TV, radio and mailer ads from both sides of the issue, something Sonoma County can look forward to in the near future.