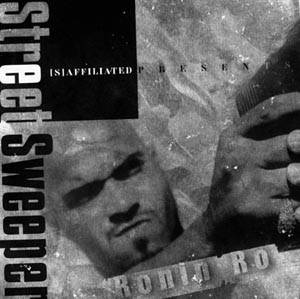 Beaten to a Pulp

‘Street Sweeper’ bills itself as the first hip-hop novel, but the pulpy plot stinks

GOOD NOVELS sneak up on you. The plot takes turns the reader never expects, but in the end, the author has you convinced that things couldn’t have gone any other way.

Then there’s Street Sweeper ([S]affiliated; $15.95), billed by its publisher as “the first hip-hop novel.” Here is a book that sweats marketing out every pore, from its groovy square shape to its silver-sheened cover to its author’s pseudonym, Ronin Ro. More important, here is a book that never, ever manages to surprise you. Every plot element arrives exactly on schedule–and still, despite the obvious artifice involved, nothing fits together.

How simple is the plot? Imagine a comic book without the pretty pictures and you’ll get the idea. Jerome Usher is one of the deadliest hit men ever to come out of Harlem, a high-rolling assassin whose murderous assignments fund an extravagant lifestyle full of name-brand clothing, name-brand guns, and anonymous bedmates.

Alas, this cozy arrangement is turned upside-down one fateful day when a job goes wrong and Jerome is confronted with an ugly choice. Either he rubs out a pair of witnesses, who happen to be a wounded little girl and her beautiful single mom, or he gets himself smoked by his employers. Luckily, Jerome turns out to be a ruthless killer with a heart of gold, and he plunges into a bloody struggle to protect the witnesses and earn money for a $3 million “experimental treatment” needed to help the injured girl walk again. FYI: her name is not Tiny Tim.

The writer who churned out this product wants it both ways. We’re offered a novel that wears its moral like a big wart on a little nose: killing people for money, we learn, is a bad idea. And yet the book also dwells lovingly on the minutiae of violence, offering a detailed inventory of Jerome’s gun collection and a fair number of the kind of James Bond-style shootouts that leave a trail of bodies bleeding into the dirt and our well-dressed hero merely a bit out of breath.

Even on the level of pulp, this thing doesn’t work, if only because the writing is so wretchedly bourgeois. In “Chapter Zero,” we’re taken on a tour of Jerome’s apartment, full of high-tech toys, African art, and big guns. The author sums up the decor as “tasteful and masculine.” Hey–where’d all that street language go?

Excellent books have been written about violence in the ghetto, from Geoffrey Canada’s Fist, Stick, Knife, Gun to Luis Rodriguez’s Always Running. These works of non-fiction are fueled by authenticity and genuine moral concern, two things that Street Sweeper just can’t offer. *

Combing various groups of the Latin community–Puerto Ricans, Colombians, Mexicans and Chicanos–these stories range from prepubescent humor (Al Lujan’s “Strong Arms”) to first love and puberty (James Caçon’s “My Lessons with Felipe”) and maturity/acceptance of one’s self (“Sun to Sun,” by the editor).

The cover’s quasi-religious painted image of a Latin man in a wedding veil is clearly selling to people of color. The stories, however, are universal–plugging into one’s own experiences afterward is irresistible. Lujan’s bizarre memoir, a recollection of absolute blood fidelity to a molded plastic Hasbro toy, exemplifies how this anthology bends and confounds expectations.

The introduction somewhat lames the book from the outset–best to skip it. It seems to me a vehicle to sell a graspable brown-ness to white liberals; mostly it makes shaky parallels between Latinos and blacks and in the process forces their experience too much together. They are far too different for comparison. If you dodge the intro, you’ll discover true diversity,–T.M.