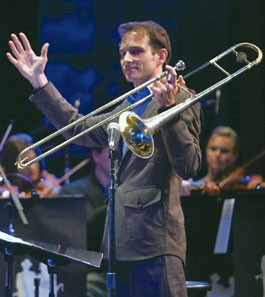 “At his heart, he’s just a skater,” one of Adam Theis’ oldest friends recently told me. “Everything he does comes from doing skateboard tricks. His whole life philosophy is ‘Dude, wouldn’t it be rad if . . .'”

If you’ve followed Theis and his San Francisco–based Jazz Mafia these last couple years, you’ll understand. Skating is about envisioning an end result—an ollie up some stairs, say—and then concentrating on it so intensely that the body and mind lock in step and make it happen through some miraculous, unknown power. Theis operates the same way in music. Everything is an ollie.

The Jazz Mafia’s giddy enthusiasm hasn’t gone unnoticed. Mos Def recently called on Theis to put together a live backing band, and just last September, Stevie Wonder turned up at a club show and sang two songs with Theis’ outfit. Among all this activity, Theis received a prestigious Emerging Composer grant from the Gerbode-Hewlett Foundation. His project? Composing and arranging a one-hour magnum opus of jazz and hip-hop to be performed by a 55-piece orchestra.

Dude. That’s one crazy-ass ollie. But it would be so rad.

Brass, Bows and Beats is the result, a wildly successful masterwork unveiled last year that blends angular horn arrangements, symphonic swells, turntable scratching, freestyle rapping and a hell of a lot of soul. Reminiscent of such large-ensemble works as Charles Mingus’ Epitaph or Miles Davis and Gil Evans’ Live at Carnegie Hall, it captures the mood of San Francisco much like Gordon Jenkins’ Manhattan Tower captured New York City. After hearing its packed-to-the-gills premiere at the Palace of Fine Arts last year, I drove home distinctly feeling that such staggering vision couldn’t possibly stay confined to the Bay Area. It had to go on tour.

This month, Brass, Bows and Beats hops on a plane and does just that. The Jazz Mafia will visit every major jazz festival in North America this summer, from Monterey to Newport to Montreal to New York. They’ll even bring their hybrid opus to the Hollywood Bowl, just two days after a special appearance at the Harmony Festival on Friday, June 11, with guest MCs Lyrics Born and Chali 2na. And everyone’s climbing on board.

“I was just talking to Pink Martini about it last night, actually, ’cause they do something slightly similar to what we’re doing,” Theis says by phone from his Mission district home. “When I said, ‘Yeah, we travel with the whole orchestra,’ they were like, ‘What?'”

Festival guarantees do not cover travel expenses for 30 people, nor the requisite hiring of 15 additional musicians in each city, and the group’s been playing charity house shows where Theis gives a PowerPoint demonstration between sets and passes the proverbial hat. A few benefit shows at Yoshi’s, where the Jazz Mafia have lately been performing Miles Davis tributes, James Brown parties and sitting in with world-class DJs Q-Bert and Just Blaze, help also. (Theis credits Yoshi’s artistic director Jason Olaine with hooking up the festival bookings: “He has a huge reputation in the industry. He just had to make a few phone calls.”)

Though Brass, Bows and Beats utilizes hip-hop rhymes and rhythm courtesy of the brilliant vocalists Dublin, Karyn Paige, Seneca, Aima, Joe Bagale and others, Theis says it’s more the attitude and aesthetic that he sees creeping into modern jazz. “There’s a constant resurging and mixing,” he says. “Hip-hop was born of people not having money to buy grand pianos, and figuring out ways to use low-budget devices to make awesome music. That’s just going to keep happening. That’s going to infiltrate into all kinds of music.”

There’s just one burning question. After packing up music charts, instruments and luggage for 30 people on the summertime tour, is there any room for Theis to bring his skateboard?

“Oh, yeah, always,” he says. “If you don’t, you end up pulling up to the venue, and there’s a skatepark next door.”

Out with the Old