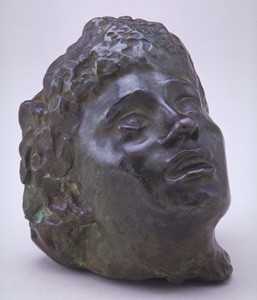 Cast Away: ‘Severine,’ circa 1893, is among the works exhibited.

On an early summer morning in the city of Sonoma, Honoré de Balzac lies rather rudely on the type of dolly more normally employed to reposition refrigerators than to haul about great French writers. Nude and pointedly facing upwards, Balzac is delicately supine upon a heap of industrial moving blankets, just a skosh over from the vacuum cleaner, which itself was just adjacent to an extra length of electrical extension cord. Such refined niceties surround the bronze cast of the famed author because he is, of course, in a museum, where niceties are known to abound.

But museums on those days when new exhibitions are being installed are generally dusty, dirty places that benefit from quick access to dollies, vacuum cleaners and a good length of extension cord. On this particular messy Thursday, Fine Arts Museums head conservator Elisabeth Cornu is sensibly dressed in slacks and a warm shirt, clean cotton gloves enclosing the smear of her fingertips as she works to position Balzac, a cloaked and hooded burgher, a tiny plaster foot and other forms into careful placement.

Having just closed an exhibition of children’s art drawn from the pool of students attending the five public schools within walking distance of its downtown Sonoma location, the Sonoma Valley Museum of Art next showcases 23 works by master artist Auguste Rodin (1840-1917). Titled “The Intimate Rodin: Sketches for Masterworks,” this exhibition runs June 19-Aug. 15 and allows North Bay visitors to see a considerable portion of the Rodin collection held at San Francisco’s Palace Legion of Honor, pieces of which haven’t been shown to the public in years.

In fact, Conru admits with a chuckle that the Fine Arts Museums–the arts coalition including the Legion, de Young and other S.F. institutions–isn’t exactly certain of all the Rodin pieces it does in fact have. At least not top-of-the-head certain. There are a lot: between 70 to 80 pieces, depending on the source cited. And pointing to Reclining Man, a small figure study in plaster, Conru says, “He’s never been seen before.”

But plenty showcased in “Intimate Rodin” has been seen before, causing the visitor to clasp fingers firmly behind the back in order to curtail the irresistible urge to touch and rub and caress the work in huge, greedy, swooping strokes. Rodin’s famous Kiss is here, its fluid grace of two naked lovers embracing almost as featured a monument at the Legion as perhaps is The Thinker, and will remain exhibited without a vitrine, or clear plastic box, enclosing it.

In addition to such well-known works, the exhibit presents a small selection of the many maquettes (small-scale models) that Rodin fashioned while working toward larger sculptures, most notably his life’s masterwork, Gates of Hell, a massive entryway for which such singular pieces as The Thinker and The Kiss are merely parts. The exhibit additionally shows several delicate and exact and stunning portraits drawn by Rodin in preparation for sculpture.

“Some of these portraits really show the movement that he introduced to his sculpture,” Conru says, looking briefly up from a small piece she’s coaxing gently into position on its stand.

Considered by many to be the greatest sculptor after Michelangelo, Rodin should feel comfortable with a summer spent in Sonoma; one of his most consistent American benefactors, after all, kept a large home here.

The same San Francisco sugar heiress whose surname graces a performing arts center in Rohnert Park and who owned a 3,000-acre ranch near downtown Sonoma still named in part the Sobre Vista is the same Alma de Bretteville Spreckels who founded and built the Palace Legion of Honor, got the Salvation Army its start in the lucrative rummage business and established San Francisco’s Maritime Museum, all the while successfully spending her fortune of some $13 million before her death in 1969.

Gorgeous and willful and poor, Spreckels when a young woman was in high demand as an artist’s model. After marrying sugar heir Adolph Spreckels, she turned her considerable energies to good works and fine things. Meeting Rodin at the turn of the 20th century through a friend, Spreckels became one of the sculptor’s most prolific patrons, eventually filling her Legion with the bronze and stone and plaster fruits of his huge talent and her sharp eye.

Sonoma Valley Museum of Art executive director Lia Transue is appropriately awed. “It’s just amazing that our small town is having this exhibit,” she says, walking carefully around a bronze titled Faun and Nymph featuring two figures, a naked nymph seated upon the goat-man’s lap, his hand coming cunningly up between her legs, her hand cunningly stopping it. “This opens the door to many more world-class exhibits to come. It pushes and challenges the museum.”

Conru, briskly working to fit a burgher maquette into position pauses in her work. “This is what makes life worth living to us,” she declares. “To look at and touch and be with real art.”

“Don’t underestimate the technical difficulty of the Shrinky-Dink,” warns Museum of Contemporary Art executive director Gay Dawson with a laugh. “It’s harder than it looks.” At the other end of the spectrum from Rodin, the MOCA hosts “Raw, Boiled and Cooked: Comics in the Raw,” a traveling exhibition matching that antic art with the obsessive Shrinky-Dinked drawing of local artists Will Smith and Todd Barricklow, who exhibit as “Bound by Habit.” Both artists have been receiving notice for their work, perhaps for the freshness in fact of old-fashioned drawing in the age of multimedia art installations. “In the age of mediation,” Dawson says, “there is definitely a place for the hand, the breath, the touch, the finger print. But there is also a place for the slick computer-aided images to help us understand what’s happening to us.”

Napa’s Off the Preserve gallery opens its “Comics Stripped” exhibit on Friday, June 18. This exhibit examines what happens to cartoons when the text is removed from them: Does the drawing rise to fine art and stand alone? Does narrative remain? Does it matter?

Dawson tries to feel the phenomenon out. “It’s probably generational,” she muses. “Emerging artists are the first generation to be so inculcated with comics. And as an artist,” she smiles, “you are what you see.”