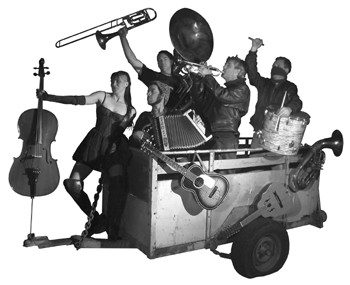 Eastbania isn’t on most maps. Both a location and a frame of mind, it lies somewhere between Berkeley, Oakland and Transylvania. But if you’ve ever been to a party with music and art in a warehouse, you’ve been to Eastbania. And if you’ve ever danced to the Lemon Lime Lights, you’ve already enjoyed that mystical place’s regional music.

“Eastbania is an identity for the whole East Bay area, and how when you’re in the East Bay, people are, like, ‘Are you going into the City?’ Well,” snorts J. D. Schreiber, singer and accordionist for the Eastbanian-born band the Lemon Lime Lights, “Oakland‘s a city. So I started feeling like we gotta make a stand. It all came out of living down in Oakland four or five years ago–the whole gentrification process was happening and the rents were going up. We felt a little under siege. And it’s also a pun on Albania and Yugoslavia–the third-worldiness of Oakland.”

“It does seem like a metaphor for all of the displaced people in the world,” says Doc Ward, the band’s drummer. In a way, the Lemon Lime Lights’ musical breakdown could represent all of the displaced instruments in the world, too: Schreiber’s accordion and his wife Lisa Pesch’s cello and occasional percussive tap dances; Reid Johnston’s one-man lower brass section; Jeff Hobbs’ cornet, violin and saxophone. With most pop bands, you can occasionally catch swatches of such elements in the background for color; with the Lemon Lime Lights, they are the band. And a colorful band indeed, of simultaneously sepia and day-glo tones.

Their first full-length CD, If I Ever Get Back: Songs of the Eastbanian Diaspora, is rife with cheeky lyrics (“Polygamist Rag”), Pesch’s spooky vocal vibrato (“Lorelei”) and Hobbs’ shredding violin (“Serve the Dessert”).

Plus, they’re really cool people to hang out with. Stocking cap on head and tattoos on arms, Schreiber grills up a tasty steak dinner when I come over to the Sebastopol home he and Pesch recently purchased. Tall and willowy, Pesch has been known to sport a Mohawk and cruise around town in black tights and motorcycle boots–uncommon attire for a veterinarian, but Pesch’s not a common vet; she has a holistic animal clinic in Occidental, where Schreiber manages the office. The pair, who cofounded the band while living in an Oakland warehouse turned art gallery, moved up to Occidental several years ago during the Eastbanian diaspora. (The other band members still reside across the Richmond bridge.)

And so, after playing bars and clubs in San Francisco and Eastbania, the band are exploring North Bay venues (what there are of them) as well. At a gig in Healdsburg for Roshambo Winery’s recent anniversary celebration, in fact, a whole new fan base was discovered. “There was a group of deaf people there,” Pesch says, “and later we saw two guys from the group in Occidental. They were writing all of these notes about how great we are. That can be our motto: ‘No. 1 choice among deaf people.'”

But you don’t have to be deaf to groove on the band’s plentiful low sousaphone vibrations. And audience members can also count on the grinder–a construction of Schreiber’s–to electrify the band’s shows. You clamp a cowbell to the mic stand, apply the grinder and, he enthuses, “sparks fly all over the place, and people go crazy. It’s a little gimmick kind of thing, but it’s super fun.”

“I tap-dance in a couple of songs,” Pesch adds. “We’re having fun, which helps other people to have fun. Reid is super tall and he’s got this big, huge sousaphone on, and dances around with it. He’ll walk around a club with it–you can hear it wherever he is.”

“People can’t really believe it,” Ward says. “They’re, like, ‘Accordion, tuba, and drums–but it rocks?’ They’ve never seen anything like it.”