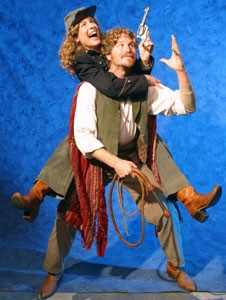 Darn Tootin’: Is Shakespeare the happy hunting ground of all minds that have lost their balance?

Some 400 years after his death, Shakespeare is big–really big–and he seems to stay that way year-round. Whether it’s winter, spring or fall, it is never that hard to locate some theater company somewhere doing something by the Bard of Avon. Ah, but there’s something about the summer that really brings out the Shakespearean spirit in us. And here in the North Bay, we have a fine share of Shakespeare shows to choose from.

The Marin Shakespeare Festival (www.marinshakespeare.org) stages one of few Shakespearean tragedies to play in the North Bay this season, the always powerful Othello (July 9-Aug. 15), starring the great Aldo Billingslea, a longtime star of the Oregon Shakespeare Festival who was hugely acclaimed for last year’s performance in the Marin Theater Company’s Hairy Ape. After a run of Oliver Goldsmith’s comedy She Stoops to Conquer (July 16-Aug. 15), Jim Dunn’s raucous Wild West version of Taming of the Shrew (Aug. 27-Sept. 25) takes the stage, featuring a massive iambic pentameter brawl certain to bring the house down. All performances are held outdoors at Dominican University’s Forest Meadows Amphitheatre. 415.499.4488.

Fast becoming the hot spot for innovatively staged shows, Shakespeare at Stinson (www.shakespeareatstinson.org) has already kicked off the summer with a super-sexy, stripped-down version of A Midsummer Night’s Dream (through June 27), with most of the action taking place on or around a center-stage bed. Rounding out its season, the beachy Bard-fest also features The Fantasticks (July 9- Aug. 22) and the Reduced Shakespeare Company’s witty Complete Works of William Shakespeare (Abridged), running Aug. 27-Oct. 3. 415.868.1115.

In Sonoma County, the Rep’s Summer Shakespeare Festival stages a streamlined, sleek and simple version of the “dead teenager play” Romeo and Juliet (Aug. 13-21), performed outdoors in Sebastopol’s Ives Park on the festival’s new permanent stage. This year’s offering is a two-play festival that starts with the original melodrama Dastardly Deeds at Yoursin Mine (July 9-18), written by Squire Frydell. This is the kind of show where booing and hissing are heartily encouraged. 707.823.0177.

At Sonoma’s Gundlach Bundschu Winery, Kate Kennedy’s Avalon Players (www.sonomashakespeare.com) launch a rowdy open-air production of Twelfth Night (Aug. 20-Sept. 5), followed by a youthful spin on Taming of the Shrew (July 9-17). 707.996.3264. Sharing the same stage, Carl Hamilton’s new Sandlot Shakespeare (www.sandlotshakespeare.com) presents a show conceived by the Reduced Shakespeare Company that’s not at all about Shakespeare: The Complete History of the United States (Abridged). It is–dare anyone say it in public?–even funnier than the abridged Shakespeare (July 9-18). 707.578.7233.

In Napa, still smarting from the hopefully temporary shutdown of the Napa Shakespeare Festival, a new musical version of A Midsummer’s Night Dream has its world premiere. Adapted by John Shillington, Bret Martin and Randal Collen, this Napa-themed Dream runs July 30-Aug. 8. The best thing about this one is it’s free! 707.259.8077.

There is Shakespeare beyond the North Bay. The California Shakespeare Festival in Orinda (www.calshakes.org), a dependable provider of first-rate Bard, is doing a partially puppeted Comedy of Errors (through June 27), as well as Henry IV, The Importance of Being Ernest and All’s Well That Ends Well. The San Francisco Shakespeare Festival’s free annual Shakespeare in the Park (www.sfshakes.org) presents Twelfth Night at various public parks. The ever-inventive Shakespeare Santa Cruz (www.shakespearesantacruz.org) schedules an all battle-of-the-sexes lineup with Taming of the Shrew, Who’s Afraid of Virginia Woolf? The Tamer Tamed (a kind of Shrew sequel) and Lysistrata.

Of course, many North Bay Bard-o-philes will be making the annual exodus to Ashland for the Oregon Shakespeare Festival (www.orshakes.org), where one will have the opportunity to see 11 different plays in three different theaters. Shows include The Comedy of Errors, King Lear, Much Ado about Nothing and Henry VI, Part One, plus a bunch of non-Shakespeare works such as A Raisin in the Sun and Charlotte Jones’ Humble Boy. A bit closer to home, the Ukiah Players (www.ukiahplayerstheatre.org) currently present a modern-day Mendocino-centric production of As You Like it, onstage through June 26.