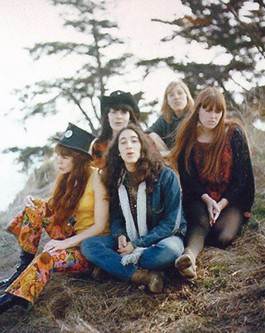 The pioneering women of S.F.'s Ace of Cups

It’s one of those evocative names sometimes found among the small lettering, lower down on wildly colorful posters from San Francisco’s flower-powered concert venues. But the Ace of Cups weren’t just any band playing, writing, gigging and trying to make a name during the Summer of Love. They were forging a tiny slice of history, too.

“I feel like we were the pioneers, the first women’s rock group,” reflects drummer Diane Vitalich. “I think we really influenced other women who saw us and thought, ‘Wow, I wanna do that.’ Because that’s how it starts.”

A habitué of the city’s dance halls, the then-19-year-old Vitalich soon tracked the rhythms that moved her to their source and plunged into drum lessons, which led to frequent jam sessions. That was where bass player Mary Gannon first met her.

“She said, ‘Let’s start an all-girl band,'” Vitalich recalls. “I said, ‘That’s my dream, too.'” Gannon already knew keyboard player Marla Hunt, and Mary Ellen Simpson was soon recruited on lead guitar. They then found diminutive powerhouse Denise Kaufman blowing harp with Blue Cheer, and discovered she wrote songs and played guitar as well. “One of her songs just knocked us out, and we felt she’s gotta be in the band, too,” Vitalich recalls. “So there was the five.”

The group’s name, taken from a Tarot card, was supplied by their initial manager, Ambrose Hollingsworth. “It shows the hand of God holding the cup, and out of the cup are five streams of water—there were five of us—and that water comes back into the earth and up again. It was the fertility of infinity,” Vitalich explains. “So that was our name and we loved it.”

While their musical and personal chemistry was almost immediate, success as a band was not. The group was rehearsing seriously, but their manager, Vitalich says, “didn’t want us to be seen until we got better,” and accordingly booked their first public performance in a high school gym far north near the Oregon border.

“They didn’t know what to make of us,” Vitalich laughs now. “They were overwhelmed and didn’t know what to think.” A round of free Cokes and some explanations at intermission helped quell the confusion, and the date was considered a modest success, at least in hindsight. When they did make their eventual public debut in San Francisco, it was by opening a free show in the Golden Gate Park panhandle for a then-unknown out-of-town guitar player—a guy named Jimi Hendrix.

With all five Aces singing and sharing a command of their instruments that rivaled their male contemporaries, the group could and did do everything from social commentary to soul covers, exploratory rock to gentle balladry. Soon, they were regulars on the local circuit, playing the Straight Theater, Avalon Ballroom and occasionally the Fillmore, often opening for Quicksilver Messenger Service or the Sons of Champlin, with whom they shared management. Their career highlight may well have come in April 1969, when they shared the bill at Winterland for three nights supporting the Sons of Champlin and the Band.

The one thing that eluded the Ace of Cups was a record deal.

“We were offered a $40,000 contract with Warner Brothers,” Vitalich says wistfully, “and we were ready. We were young and we were excited, we had that thrill of really wanting to do it. But Ambrose decided that we were worth a lot more money and wanted to hold out.”

So they passed. Management held out again when a second offer came around a year later. By that time, their moment had passed. “Some of the ladies were starting to have babies, so that changes things,” Vitalich reflects. “But we did all feel like we missed something that could have been much bigger for us.” Around 1972, they quietly dissolved.

It wasn’t until 2003 that the band members assembled their various informal recordings from the group’s heyday—sound checks, live dates and rehearsal tapes—to compile the first and only Ace of Cups release, It’s Bad for You but Buy It. The five women still assemble occasionally, sharing news, memories and music.

“It’s like we were sisters,” Vitalich says. “Because we went through so much together, that bond is there, no matter what.”