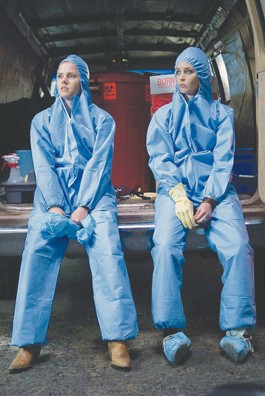 Starting with a suicide—a comedic one, in a sporting-goods store—the macabre Sunshine Cleaning maintains its light-hearted mood of loss and self-destruction to the end. The film emerged at the 2008 Sundance festival, and then it submerged, despite A-list stars Amy Adams and Emily Blunt.

In its present form, it appears badly trampled by studio executives with cold feet; the happy ending couldn’t have been more trumped-up if a game-show host wrote it. Odd that a movie about the job of cleaning would go so wrong when trying to clean up every loose end in the plot. And yet Sunshine Cleaning has some integrity even in its cut-up form. At its best, the film evinces that paradoxical quality one seeks in indie movies—that quality of being both shambling and well-built.

Part of what makes the film well-built is the Barbara Ehrenreich factor. Sunshine Cleaning seems very knowing about pink-collar work. In Albuquerque, N.M., Rose (Adams) is the single parent of an odd boy, Oscar (Jason Spevack). Rose works for a Merry Maids&–like outfit. She also keeps company with Mack, a married plainclothes cop (Steve Zahn) whom she meets in motels. Her sister, Norah (Blunt), has repeatedly flunked out of any job more demanding than babysitting Oscar.

After a session at the motel, Mack, sort of laying around and thinking aloud, recalls the big money the biohazard cleaners got picking up the pieces of a suicide at the sporting-goods store. Rose decides she knows enough about scrubbing to do such a job, and she recruits the feckless Norah to help. They are aided by a kind industrial-cleaning and supplies store owner named Winston (the Matt Dillonish Clifton Collins Jr., who played Perry Smith in Capote).

Cleaning up the vast ickiness of trailers and rented rooms, Adams and Blunt get to bounce off one another. And as it often does, the grossness gives way to pity—a pity that cancels out the girls’ own self-pity. But when Rose starts to meet up with some of her fancy former pals from high school, they are not as impressed with her small business. Meanwhile, Norah decides to track down and stalk Lynn, the grownup child of one of their dead clients, after finding Lynn’s photos in a trailer. But Lynn (Mary Lynn Rajskub) has an agenda of her own.

Sunshine Cleaning does without conventional romance, and that’s where it centers its integrity. New Zealand&–born director Christine Jeffs (Rain, Sylvia) has made a strongly impressionistic film; what one critic described as “available-light filmmaking” actually looks more like a motif: the colors of dried blood, pink concrete and the strange clutter of old people’s homes. Here, New Mexico looks less like the land of enchantment than the land of existentialism.

The film has an outsider’s skeptical view of settling down. From what’s here, it looks as if the Lynn/Norah angle was where the romance was meant to be, and that this faced some editor’s ax. The date Lynn and Norah go on together gets truncated right in the middle, as Norah is doing a session of “trestling”—clinging onto a railroad trestle as a train speeds overhead.

The angle of the Winston and Rose relationship is also left up in the air, which is more satisfying. The self-amused Winston has a hobby; when not selling cleaning supplies, he’s building military model planes. This isn’t easy, because he lost an arm under circumstances that we never learn, even though Oscar asks him bluntly how it happened, just like a little boy will. There is all sorts of backstory potential here. What a pleasure it is that director Jeffs decides to avoid it! Collins apparently has two arms in real life, but he looks more convincing than many fake amputees we get in the movies—he acts asymmetrical.

The independent cinema demands more backstories left up in the air. When we find out about Rose and Norah’s childhood, it’s unlikely as hell; you can practically hear a producer asking dumb questions like “Why does a girl as good-looking as Rose have such low self-esteem?”

The good thing about the rewriting and reshooting work on Sunshine Cleaning is that the renovation all shows; you can tell exactly where the compromises were made, know the obvious cowardly reasons why they were done, and we can overlook them in the bigger scheme of things.