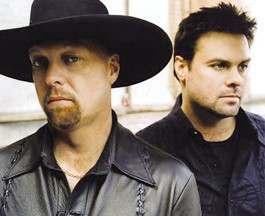 Hey, Montgomery Gentry. Yeah, I’m lookin’ at you. Say, what’s with changing up Robert Earl Keen’s song? I flipped on CMT last December and saw you guys singin’ “Merry Christmas from the Family.” Man, I love that song! But instead of singin’ the line about having to go to the store to get “a box of tampons and some Marlboro lights,” you sang “a box of Pampers and some Marlboro lights.” Did it on the second chorus, too!

I know you wanna come off as all, like, down-home country boys, so why not sing about real down-home country life? Do you think your fans are, like, gonna be offended by tampons? Is it because women in country music don’t get periods or somethin’? Is a box of tampons really any more “offensive” than a box of Pampers, whose purpose is to contain human shit?

And yo, Robert Earl Keen. How d’you feel about these clowns? They’re not exactly mangling your song, and I know the royalties are plenty good, but don’t you ask yourself the same questions? “Merry Christmas from the Family,” man, you wrote that thing as a perfect portrait of the nothin’-fancy, white-trash, trailer-park experience during the holidays. You talk about alcoholism, about racist relatives, about family dysfunction, and these jerks change the friggin’ line about tampons? Like, that’s the one thing they just can’t, in their Copenhagen-dippin’, beer-gut-waddlin’, crappy-folded-baseball-cap-wearin’ souls bring themselves to sing about? Tampons?