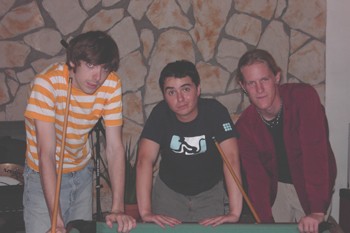 For the Righteous Fists of Harmony, everything old is new again

With a name like the Righteous Fists of Harmony, it’s hard not to ask about politics. The original Righteous Fists (or Harmonious Fists, depending on the translation) were a secret society in China in the late 1800s with the goal of disrupting the ruling class and stopping foreign invaders from the West. Their actions culminated in the Boxer Rebellion, so named because the Righteous Fists practiced martial arts. The mere image presented by the name brings up any number of radical images.

“We have political views, but we don’t really wave them in anybody’s face,” says Josh Cook, guitarist and lead singer. “But we do sing about them. We have a couple of songs we wrote that are digs at the current administration. Our politics say what we feel, say what we mean and we have fun while doing it. And that reflects in every song that we write and in every cover that we play.” He pauses. “Even if it’s something that we didn’t write, it’s still a message that we stand behind, like ‘For Your Love’ or ‘La La Land,’ which talks about how drugs can mess up your mind in a bad way.”

Formed last summer, the Righteous Fists of Harmony have set a swift pace playing gigs in every variety of bar, theater and house party. Comprised of Cook on guitar and vocals, Steve Garred on bass, and Deney Raike on drums, they have a sound that cherry-picks from every stage of rock ‘n’ roll history. Perusing their set list is like being presented with a musical summary of nearly the past 50 years. Coupled with their own original material, which reaches back to grab influences from the Beatles and the Rolling Stones, are roughly 30 cover songs stretching from Chuck Berry to Black Sabbath.

All three members met while at Sonoma State University, and Cook recently graduated through the Interdisciplinary Studies Program with a BA in philosophy and music. “I’m going to go back this fall and keep working on my master’s degree,” he says. “When I got my bachelor’s, I took the core requirements for a philosophy minor and combined it with elements of the music program that seemed relevant, like recording, music business and music history.” Raike is going into the Interdisciplinary Studies Program as well, but with the two focuses being music and business.

Although they have already recorded a dozen originals, the band are now working at Cotati’s rural Prairie Sun Studios to lay down some tracks with a richer sound. “At any given time, our recording setup is within 15 feet of a chicken,” Garred laughs. “It’s important!” When I ask for their thoughts regarding a music career, Cook responds with a smile, “As far as I’m concerned, music is what I’m doing with my life right now. I think just focusing on the music is good, and finding people who can help us with that. People who are already experienced.”

Their versions of these classics show a great respect for the original music, but what really comes through is the sheer pleasure they experience while playing. When you watch them play, it’s clear that they are just having a great time, getting off on rock and roll.

With simple, tight harmonies and the nicely rounded range of Cook’s voice, it’s actually tough to pinpoint their sound. In a music scene where everything seems to get cleanly pigeonholed, the Righteous Fists are able to fit on a bill with almost anybody from pop-punk to garage rock. “When asked what type of music we play, we’ve said ‘rock and roll,’ because if you just say ‘rock’ people are going to ask what kind of rock,” Raike explains. Cook adds, “It’s not old-fashioned, though–it’s modernized rock and roll. Modern rock and roll.”